The Middle East is Europe's second biggest intercontinental region by seat capacity after North America, while Europe is the Middle East's number two region after Asia Pacific. However, analysis of capacity by country between the two regions highlights certain imbalances.

Moreover, capacity growth to/from the Middle East has been rapid outside the biggest European countries, led particularly by Emirates and Qatar Airways. The global connections offered by Emirates, Qatar Airways and Etihad significantly boost the importance of the UAE and Qatar in Europe-Middle East capacity.

In view of the fact that most of the passengers in these markets do not originate or terminate in the Middle East, British Airways has however been much more strategically astute in exploiting the network of partner Qatar Airways to expand its network reach significantly.

The UK is the clear number one Western Europe country market by seats to the Middle East, with 8.5 million seats in 2018, according to data from OAG Schedules Analyser.

Four further Western European countries have more than one million seats to the Middle East in 2018. In declining order, these are Switzerland (1.8 million), Netherlands (1.5 million), Greece (1.4 million) and Austria (1.0 million). Belgium, with around 700,000 seats, completes the top 10.

There are then six countries with approximately a quarter to half a million seats to the Middle East: Denmark, Ireland, Sweden, Norway, Portugal and Finland.

Finally, three Western European countries have only a very small number of seats: Malta, Iceland and Luxembourg, all of which have entered this market since 2016. 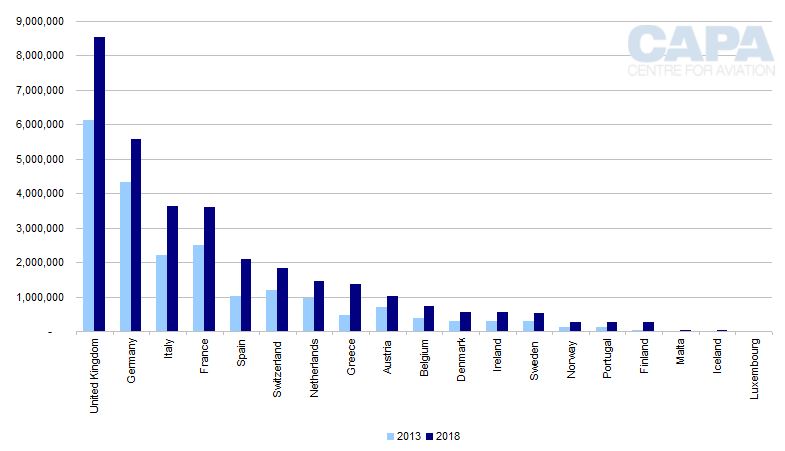 The 19 Western European countries with direct air links to the Middle East in 2018 account for 60.1% of all seats between Europe and the Middle East.

A total of 24 Eastern/Central European countries have capacity to the Middle East. The 22 countries other than Turkey and Russia have grown their combined share of Europe-Middle East seats from 9.1% in 2013 to 15.6% in 2018, according to data from OAG Schedules Analyser. The biggest of these is Ukraine, with a seat share of 1.9% in 2018, while Azerbaijan, Poland, Cyprus, Romania, Georgia, Czech Republic and Hungary also have more than 1% of seats.

Western European countries ranked by share of all seats between Europe and Middle East, 2018 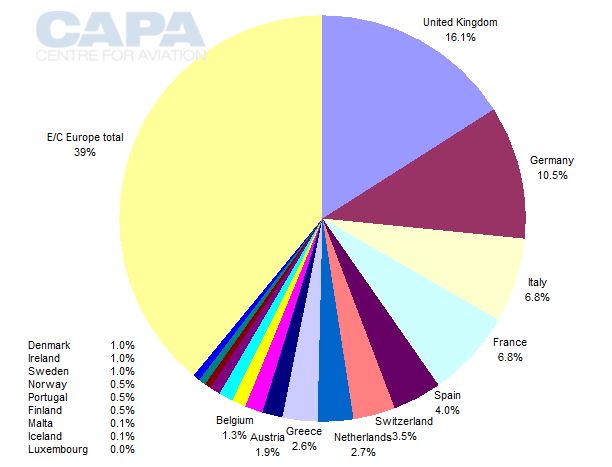 In the five years from 2013 to 2018, the total number of seats between Europe and the Middle East has grown at a compound average growth rate of 12.0% pa.

Western European growth has averaged 9.0% pa – only half the 17.9% pa average of Eastern/Central Europe.

Finland has had fastest five-year seat growth to Middle East

As noted above, the three smallest Western European countries ranked by seats to the Middle East only entered this market in the past couple of years: Malta (in 2016), Iceland (in 2017) and Luxembourg (in 2018).

For these three, it is not possible to calculate a five-year compound average growth rate.

Among the remaining 16 Western European countries with direct services to the Middle East, the fastest five-year CAGR has been experienced by Finland, with 50.2% pa (also the next smallest after the three new entrants). This has been driven by Qatar Airways' entry and rapid expansion from Oct-2016, growth from Finnair, Norwegian's entry in Nov-2015 and flydubai's planned entry this winter.

Greece has the second fastest CAGR, at 24.0%, led by significant expansion by Aegean Airlines in addition to Emirates, Qatar Airways and Etihad.

Emirates has also been the main driver of growth from Belgium and Ireland (Qatar Airways' summer 2017 entry has also boosted the latter).

Not surprisingly, the biggest Western European markets by seats to the Middle East have also grown at the slowest pace since 2013. Five-year CAGR for Germany has been 5.2% pa, for the UK, 6.8%, and, for France, 7.5% pa. Nevertheless, these are still healthy growth rates in the context of global and European aviation.

Turkey, Europe's biggest market by seats to the Middle East, has grown at a compound average rate of 15.8% pa since 2013, led by rapid expansion from both Turkish Airlines and Pegasus. 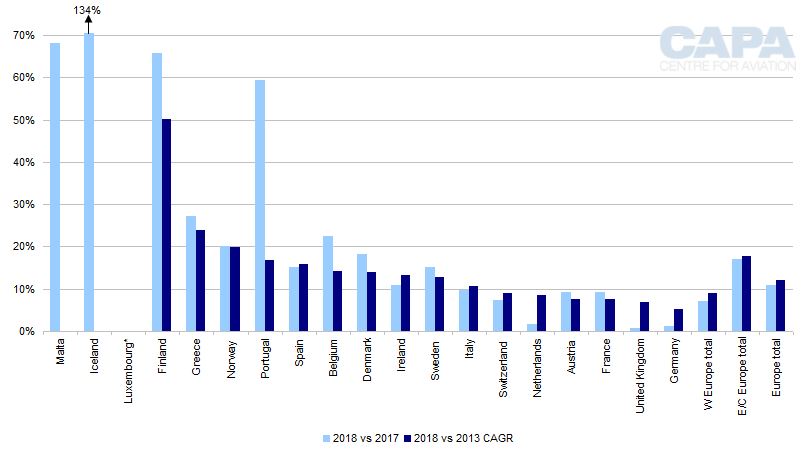 *Luxembourg entered Middle East market in 2018, so calculation of growth rates is not meaningful.
Source: CAPA - Centre for Aviation, OAG.

UAE, Israel and Qatar account for 72% of Middle East-Europe seats

At the Middle Eastern end of the market, the top three countries by seats are all relatively small by population but they have a high share of Middle East-Europe capacity. They account for 72.1% of seats to Europe in 2018.

The United Arab Emirates, home to both Emirates and Etihad, is comfortably the biggest Middle Eastern country market by seats to Europe. With 19.6 million seats in 2018, the UAE accounts for 36.9% of all Middle East-Europe seats.

This is nearly double the 10.9 million seats to Europe from Israel, the number two market at the Middle Eastern end, and 2.5 times the 7.8 million seats from Qatar.

Compound average growth in seats from UAE to Europe from 2013 to 2018 has been 8.5%, slower than the overall market, whereas Qatar has enjoyed an average of 18.1% pa.

A very significant proportion of capacity from Europe to the UAE and Qatar is for onward connection into the Gulf airlines' networks in Asia Pacific and Africa.

Israel is a separate market from the rest of the Middle East, differing from the other two large countries by seats to Europe in that it is largely an end-of-line market. Demand to/from Israel as a destination is driven by leisure, business and VFR traffic and has benefitted from an open skies agreement with the European Union (five-year CAGR is 14.4% pa).

Saudi Arabia, one of the Middle East's larger countries by population, ranks fourth by capacity to Europe, with 3.7 million seats. Its five-year CAGR has been 13.9%.

In fifth place is Iran, the region's largest country by population, but whose contact with Western Europe has been limited by sanctions. The lifting of sanctions in 2015 led to a 25% increase in Iran-Europe seat numbers in 2016 and a further 28% increase in 2017.

However, US President Trump's return to a colder relationship with Iran appears to have already started reversing this growth, with seat numbers from Europe set to fall by 3% to 2.9 million in 2018 (source: OAG). British Airways and Air France announced on 23-Aug-2018 that they would be suspending service to Iran in Sep-2018.

Sixth placed Lebanon has 2.2 million seats to Europe, and three other Middle Eastern countries have approximately 1.4 million: Kuwait, Jordan and Iraq. The top 10 is completed by Oman, which has been the fastest growing market to Europe over the past five years (CAGR of 23.5% pa), with just under 1.0 million seats.

Middle East countries ranked by share of all seats between Middle East and Europe: 2018 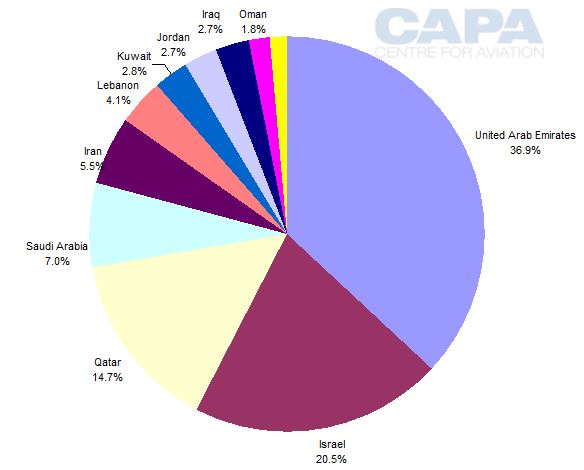 Unlike other regions from Europe, the Western Europe-Middle East market is dominated by Middle Eastern airlines. This is largely due to the significance of the three big Gulf superconnectors (see table below).

The biggest European carrier on Western Europe-Middle East, British Airways, is only fifth, and has just 3.6% of seats in this market (week of 20-Aug-2018, source: OAG).

The major difference between British Airways and its major European competitors however is its extensive codeshare relationship with oneworld partner Qatar Airways. Qatar’s oneworld membership promotes substantial additional network coverage, both for BA and for other oneworld partners.

Moreover, the much higher number of Gulf carrier seats in the UK market has greatly enhanced the country's connectivity with the rest of the world, offering global one stop service to and from a large range of regional UK cities that previously had struggled to achieve international long haul links.

Yet, despite the more protectionist policies followed by Germany, France and Italy for example, British Airways still manages to achieve the best financial results of any of its big three peers in Europe.

Top 10 airlines by seats between Western Europe and Middle East: week of 20-Aug-2018