Kuwait National Airways (-1.9%) shares fell again on Wednesday (07-Apr-2010). Subsidiary, Wataniya Airways announced plans during trading to launch Kuwait-Rome service, effective 31-May-2010. Rome will be Wataniya Airways’ eleventh destination and its second European city after the carrier’s earlier announcement of plans to launch Istanbul service from the beginning of May-2010.

In Africa, Comair (+1.9%) gained, rebounding from a 6.9% decline the day prior. The rise in share price was despite a 0.4% fall in South Africa’s JSE, due to some profit taking and a decline in the US Dow Jones Index. 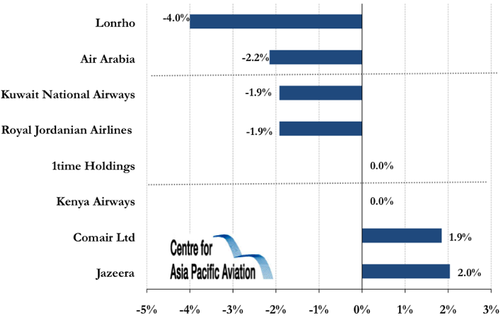