Shares in Virgin Blue gained 3.5% yesterday. The carrier suffered a serious technical fault on Sunday as the Navitaire New Skies system experienced a hardware failure, forcing the airline to switch to manual. The carrier said its reservation and check-in systems were up and running yesterday after another technical glitch in the morning. There were no flight cancellations.

The announcement came after its computer system crashed this morning, delaying two flights from Brisbane. CEO John Borghetti apologised for the cancellations and delays on 26-Sep-2010. Mr Borghetti plans to meet with Navitaire Managing Director, John Dabkowski, on 30-Sep-2010 to discuss the issue. He confirmed the carrier plans to seek compensation for the system shutdown. The CEO is reportedly considering dumping the system for Amadeus’ GDS.

The carriers now have until 11-Oct-2010 to make their submissions, after they requested an extension from the original deadline of last week to prepare information and meet ACCC representatives to discuss its concerns. The ACCC plans to make its final decision on the alliance by 20-Dec-2010.

Cebu also dominated the domestic air travel market during the period, with a market share of 48.7%, and carried 1.2 million passengers more than its closest competitor, Philippine Airlines.

CEB attributed its 26% international passenger base growth to its “robust” positions in Asian destinations, such as Osaka, Seoul Incheon, Singapore, Hong Kong, Shanghai and Macau. The carrier now plans to take delivery of three new A320 aircraft in 4Q2010, to increase frequencies to Kota Kinabalu, Taipei, Kuala Lumpur, Jakarta and Seoul Incheon.

Shares in AirAsia declined 4.9% yesterday. Separately, AirAsia X CEO Azran Osman Rani stated the carrier’s proposed listing will be a “good way” to raise funds for its fleet expansion plans. Mr Osman Rani stated a larger fleet would allow it to expand its route network to underserved markets. The LCC plans to see a public listing in 2H2011. 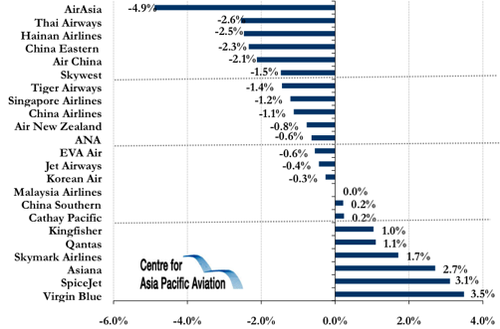 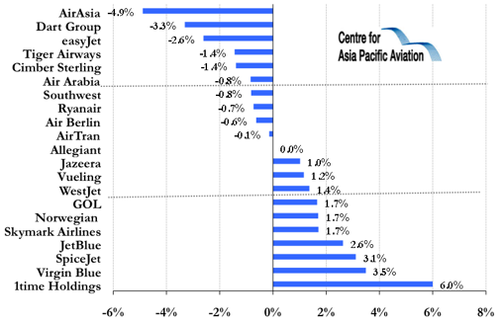