The carrier reported a full year loss of AUD160 million (USD134 million) in the 12 month period (to Jun-2009), on the lower end of its AUD160-165 million forecast, hurt by falling passenger demand amid the "toughest operating conditions in its nine year history" and costs (AUD74 million) associated with the launch of its long haul V Australian operations.

Virgin Blue also stated yields on its short-haul business had improved from May-2009 to Jul-2009. The carrier stated that “whilst it cannot be considered a recovery at this stage, it does indicate some stabilisation at least in the domestic market".

V Australia also continues to suffer, losing AUD124 million in the first four months of operations, reflecting "the difficult long-haul environment compounded by the US  centric focus of the launch routes."

Virgin Blue shares have risen 38% so far in 2009 to yesterday’s close, recovering from last year’s 86% slump. 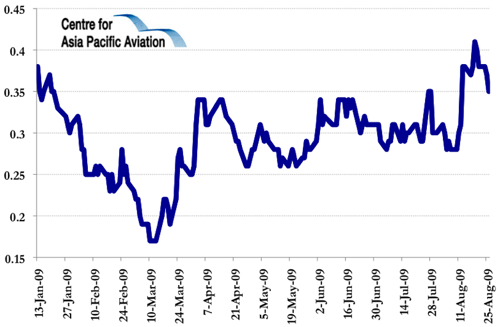 In the US, Southwest shares were down 0.9% yesterday, as the FAA stated it is investing the carrier over the use by a maintenance company hired by the LCC of unapproved parts for repairs on at least 42 of its B737 aircraft. However, the FAA stated the carrier could keep operating its aircraft for now. 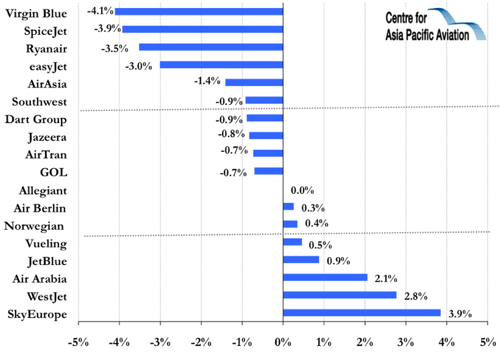 LCC SECTOR strategic updates from around the world are NOW AVAILABLE! Sign up today for your free trial subscription to Peanuts! Daily.