Virgin Australia meanwhile has taken another step to challenge Qantas’ domestic regional network domination with the launch of the first direct link between its home base of Brisbane and Cloncurry.

The changes signal the start of Virgin Australia’s ambitions to duplicate the successful Qantas/Jetstar model which seeks to separately maximise the returns from the full service and leisure markets.

Tigerair Australia has made its first strategic move since coming under 60% control of Virgin Australia as it launches six weekly services between Sydney and Perth from 19-Dec-2013.

Qantas and Jetstar are yet to respond to the capacity increase which will still see it retain a near 65% market share on the route, in line with the group’s profit optimising bottom line of maintaining an overall 65% market share. 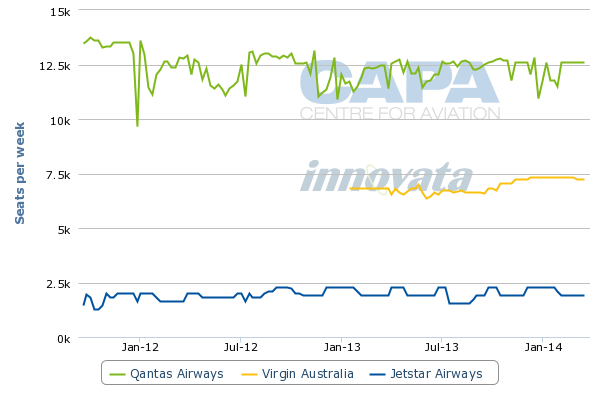 Tigerair Australia CEO Rob Sharp stated the new Perth service would not cannibalise Virgin Australia’s leisure market on the route but would stimulate the low-cost travel sector of the market. "We're much more of the leisure, value end of the market," said Mr Sharp to The Australian. "There are timings of the day which suit that market, so we co-ordinate the timings and I suppose compare notes about market depth, etcetera."

The Sydney-Perth service would allow Tigerair Australia to optimise its fleet utilisation without having to suspend or reduce operations on other routes. Tigerair Australia already bases four of its 11 A320 aircraft in Perth to serve 13-times weekly frequencies to Melbourne, currently its only trans-continental route.

For the return Perth-Sydney flights Tigerair Australia’s 22:50 departure is 25 minutes ahead of Virgin Australia’s final departure of the day at 23:15 with the same product and price differentiation.

While Tigerair Australia's schedule is focused on evening departures, Jetstar offers a daily 07:00 Sydney-Perth service with a 220-seat A321 while a second four times weekly frequency using an A320 departs at 20:00. The morning flight departs for the return leg at 09:45 while the evening return departure is timed for 22:45. 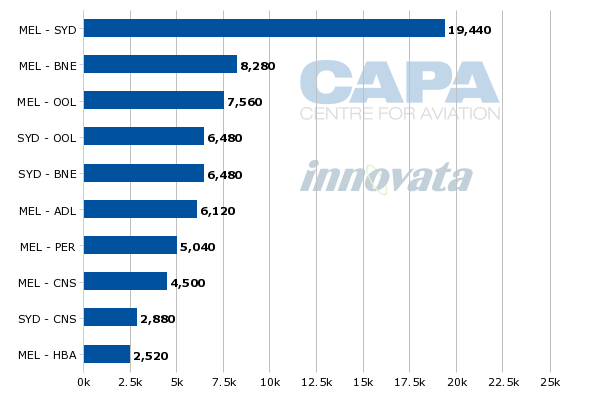 Tigerair Australia is conducting a “deep dive” to assess the direction of capacity demands from FY2015 (from 01-Jul-2015) and beyond.

Mr Sharp has stated that while the strategy is to bring Tigerair Australia up to critical mass, the carrier would not rush at the market with large volumes of capacity which would risk a strong defensive response from Jetstar or create an oversupply situation. “It’s about getting the balance right.”

Tigerair Australia is also beginning to back away from stated commitments to expand the fleet to at least 23 aircraft by 31-Mar-2018, with potential to grow to 35 aircraft.

However Mr Sharp told CAPA that the fleet expansion plan was not set in stone and could be brought forward or pushed back. “It’s going to be market driven.”

Mr Sharp told CAPA that once a sustainable base had been established any additional growth would have to be market driven. “I think the pie is going to grow at the budget end. The question is how much is that pie going to grow and getting the right mix.” The best yields would be achieved by aligning capacity to demand.

Mr Borghetti said Tigerair Australia’s performance improvement would be driven by increasing the size of the business by growing the fleet to bring economies of scale and increase cost advantages. In addition, higher yields will be achieved through improving operational and service standards while margins will be improved by extracting synergies through leveraging off its major airline shareholders for certain functions such as procurement.

Further network or capacity expansion is on the cards with Tigerair Australia planning to take delivery of its 12th A320 before the end of 2013 and another in the first quarter of calendar 2014. The two aircraft form part of eight A320s on ordered for delivery by 2016.

Tigerair Australia plans to increase capacity between Sydney and Coffs Harbour in Nov-2013 and Dec-2013 taking its one-way seats per week on the route to 1,260 from 900 in Oct-2013, according to Innovata. 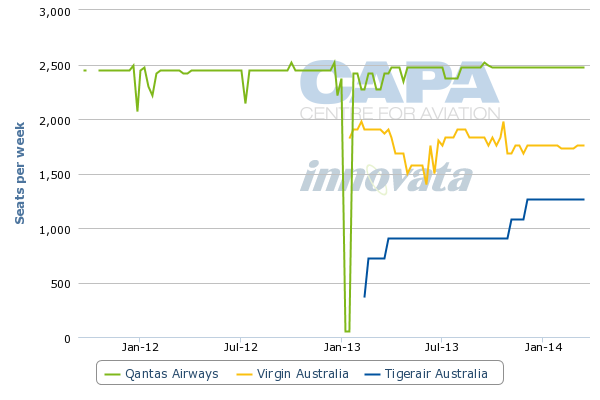 Jetstar has a market leading position on the route with up to 5,888 one-way seats per week in Oct-2013. 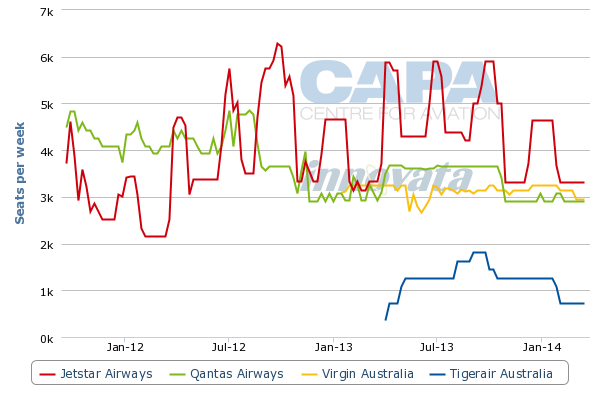 Virgin Australia has also taken the next move in the battle for the lucrative Australian regional market with the decision to launch the first direct Brisbane service to Cloncurry in north-west Queensland.

Virgin Australia will commence operating the route twice weekly on 27-Nov-2013 using a 98-seat E190 regional jet. Currently the only air access to Brisbane from Cloncurry is via Mount Isa three-times weekly or twice weekly via Townsville both operated by Qantas using Q400s.

Virgin Australia CCO Judith Crompton stated: “Cloncurry is an important regional centre that has seen strong growth in the agriculture and resources industries”.

The route takes Virgin Australia’s regional network in Queensland to 16 destinations. However, Qantas maintains a dominant market position with 22 destinations served in the state of which all but three are served direct from its Brisbane hub, excluding neighbouring Gold Coast, according to Innovata. 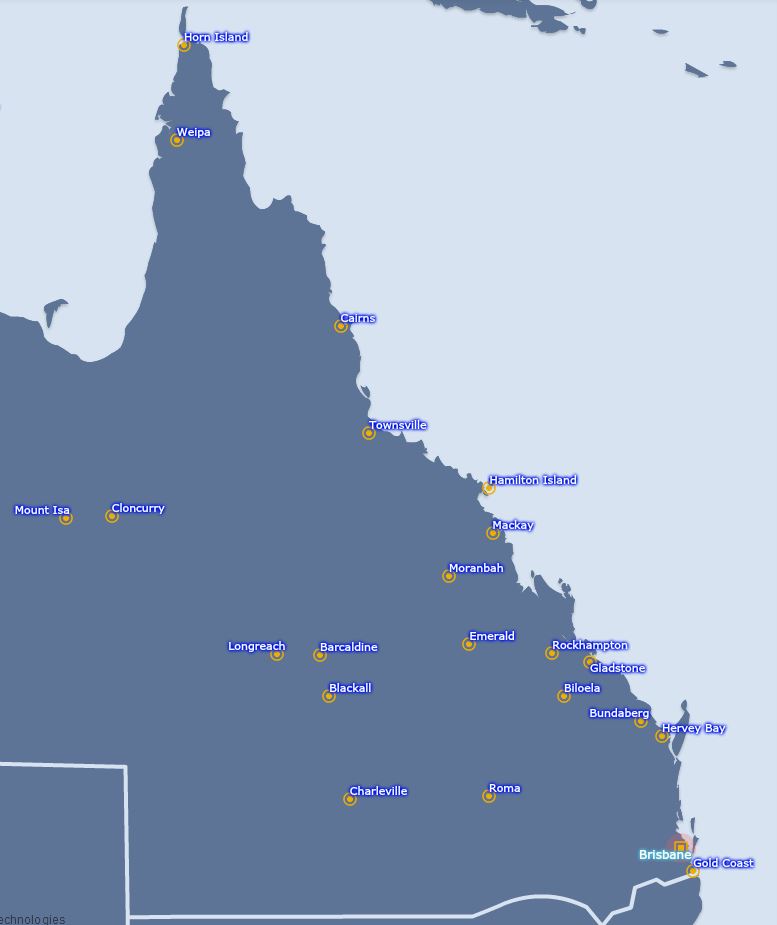 Virgin Australia has indicated that it will seek to break more of Qantas' monopolies on regional routes; Qantas has nine in Queensland, including Townsville to Mackay and Moranbah, Cairns to Horn Island and Hamilton Island, Brisbane to Biloela and Hervey Bay, Rockhampton-Gladstone, Blackall-Longreach and Charleville-Roma.

Regional Australia has become the new competitive focus for domestic carriers in the wake of a capacity battle on routes between state capitals and Virgin Australia’s acquisition of Skywest in Western Australia and moves by Qantas to firm up its position in the east.

Virgin Australia launched daily Brisbane-Bundaberg services in May-2013 using ATR72 aircraft in competition with Qantas, which has had the route to itself for more than 10 years.

But while regional traffic has been growing, Virgin Australia’s efforts to enter some markets are being hampered by regulatory restrictions imposed by the Queensland government in the interest of service stability.

The carrier has been further frustrated by a decision to delay the next round of tenders for several regulated and subsidised regional routes in Queensland until Mar-2014, pending the outcome of a review by the state’s Department of Transport; the result is to extend the duration of existing regulated services.

Virgin Australia announced on 25-Sep-2013 that it will increase Perth-Karratha frequency from 20 to 22 times weekly from 22-Oct-2013, using Fokker 100 aircraft. Virgin Australia Regional Airlines Group executive Merren McArthur said the carrier had experienced increased demand on the route which is dominated by Qantas. 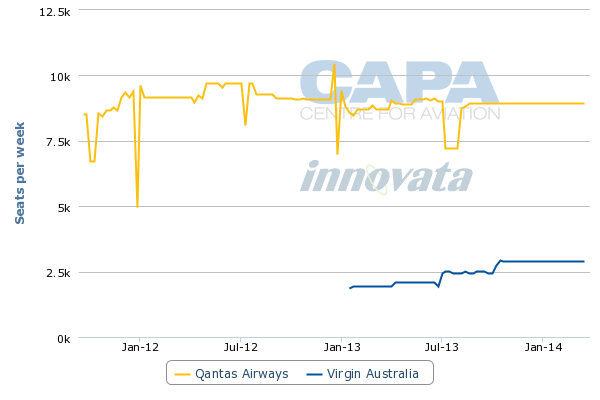 Virgin Australia’s challenge on the domestic regional network, much of which lacks competition, should result in lower fares as well as stimulating new traffic

But Tigerair Australia's expansion will need to walk a carefully balanced line between the need to build the critical mass necessary for the carrier to become a viable proposition, while also avoiding triggering a strong reaction from Jetstar. The result would lead to lower fares and yields, making it more difficult for the carrier to turn around its loss making history - although most of its other major shareholding is sympathetic to Virgin's domestic aspirations (the balance of 40% ownership is held by the Singapore-listed Tiger Airways Holdings, in which Virgin partner Singapore Airlines holds one third of the equity. Another 7% is held by Dahlia Investments Pte Ltd, a subsidiary of Singapore government investment arm Temasek).

For both Qantas and Virgin Australia groups, each professing a wish to avoid capacity inflation, especially as market conditions soften, competitive action and reaction will be tempered by these imperatives. At the same time, Virgin Australia is anxious to capture as much market share as reasonably possible in its bid to match the bigger group across the board. The likely outcome for both groups is a lean financial outlook for at least a few more months to come.