Virgin America is launching several new routes from its bases in San Francisco and Los Angeles in 1H2013 even as it cuts its annual growth rate from an annual average of 28% during the last three years to the mid-single digits during 2013 and takes delivery of just a single aircraft during the year. The routes are reflective of the airline’s network strategy during the last couple of years that entails inaugurating a mix of business and leisure markets that have ample existing service. Virgin America’s network tactics have been called into question during the last few years as profitability continues to elude the carrier; and it is not certain that the new routes it is introducing in 2013 will bring the airline closer to its first full-year profit.

New routes introduced by the carrier beginning in Apr-2013 and continuing through Jun-2013 are largely well-served by Virgin America’s main rivals United and American along with low-fare carriers JetBlue and Southwest. One of Virgin America’s most interesting moves is its entry into the crowded Los Angeles-San Jose market. It is an interesting experiment for the carrier as San Jose Norman Mineta Airport is just 49km away from its largest base and headquarters in San Francisco, from which Virgin America offers numerous daily flights to Los Angeles. With so many carriers already serving the short-haul market, it is uncertain if Virgin America can steal or stimulate enough traffic on the route to achieve sustained profitability.

Virgin America is introducing a significant amount of capacity into the Los Angeles-San Jose market when it launches service on the pairing on 01-May-2013 with four daily roundtrip flights. Shortly after its launch the carrier will represent a 22% share of the total 18,809 weekly one-way seats on offer. Southwest is the market leader with a 50% share while American and Alaska hold 15% and 18% shares, respectively. United will account for roughly 5% of the seats on offer. The market will become even more crowded in Jun-2013 when Delta introduces regional jet-operated flights from Los Angeles to San Jose, adding approximately 1,755 seats on the pairing. American, Delta, Southwest and United also offer service from San Francisco to Los Angeles. 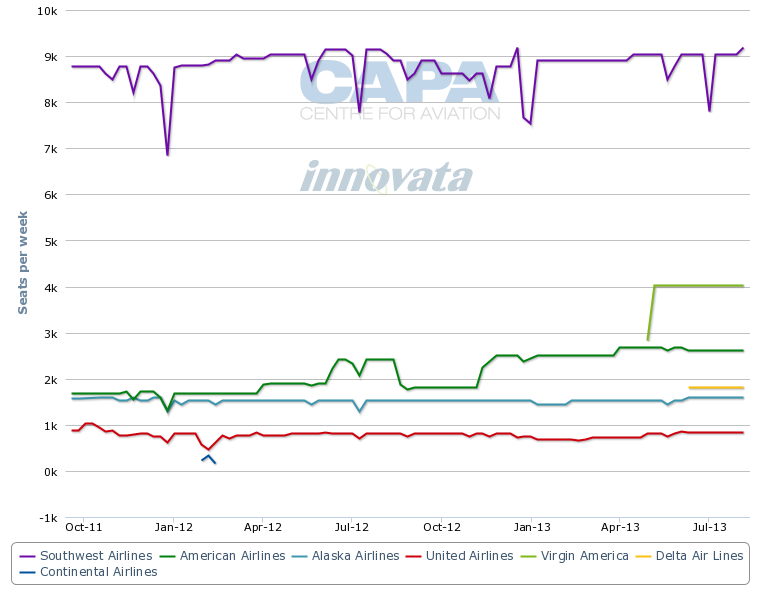 With the exception of Southwest, which operates a single-class Boeing 737 fleet, all the other carriers operate (or in the case of Delta will be operating) 50 and 70-seat regional aircraft between Los Angeles and San Jose. With the flight duration being a short 51 minutes, it will be tough for Virgin America to fill the eight first class seats featured on its Airbus narrowbodies. Carrier CEO David Cush told local media outlet The Bay Area Traveler that Virgin America had been in talks with San Jose Airport officials for roughly 18 months regarding potential service at the airport, and the airport operators were pushing for the carrier to operate long-haul flights to the US east coast. But with higher fuel prices, Cush stated Virgin America determined it was not prudent to launch long-haul service from San Jose. Presently, only two carriers offer flights from San Jose to the east coast – JetBlue with four weekly flights to its JFK base and five weekly services operated by Delta to its Atlanta hub.

Given the concentration of high-tech businesses in San Jose and its younger, technologically-savvy, population base, Virgin America might be able to gain some traction in the market at the right price point. But other carriers will be quick to match any discounted fares offered by Virgin America, which could dilute the profitability of all carriers on the route, and make it tough for Virgin America to mature the Los Angeles-San Jose market to profitability. Virgin America appears to be keeping a loose commitment to serving San Jose, which reportedly gave the carrier the typical year-long break on landing fees, as carrier CEO David Cush told The Bay Traveler the carrier would “dip our toe in the market [San Jose] and see what happens”.

Virgin America is launching long-haul flights through three daily flights each from its Los Angeles and San Francisco bases to United’s hub at Newark Liberty International Airport during Apr-2013 after attempting to obtain slots at the airport since its inception five years ago. Virgin America will compete with United Airlines on both services, representing 18% of the seats from roughly 17,300 seats on offer from Los Angeles to Newark shortly after it inaugurates service. United will account for 75% of the seats while American is set to represent a 7% stake. According to The Dallas Morning News, Virgin America is leasing Newark slots from American that were previously leased out to Canada’s Porter Airlines and United.

Once Virgin America launches flights between San Francisco and Newark, United’s monopoly in the market will be broken. Virgin America will represent roughly 18% of the 16,400 seats on offer and United will account for 82%.

The new Newark flights targeting passengers in the New York metropolitan area join Virgin America’s existing New York service and the oldest routes in its network – JFK to Los Angeles and San Francisco. Those are two of the busiest routes in the US, with United, American, Delta, United and JetBlue serving each market.

Like Newark, JFK is slot constrained, so Virgin America’s ability to finally gain access to Newark will help the carrier broaden its reach in the strategic New York market. Previously, Mr Cush has argued that slots and gates in Newark were unfairly tied up by legacy airlines, shutting out new entrants.

The new service from Newark will give Virgin America a presence at two out of three of the New York area’s major airports – JFK and Newark (LaGuardia is also slot constrained). Most legacy and low-fare carriers have a presence at more than one of the New York area’s major airports. Both Southwest and JetBlue serve Newark while Southwest operates from LaGuardia and JFK is JetBlue’s main base of operations. While Newark is United’s third largest base in terms of seats on offer, it has operated its Premium Service flights (specially configured Boeing 757s that feature amenities targeted toward high-yielding business travellers) from JFK to Los Angeles and San Francisco since 2004.

Virgin America obviously has brand awareness on both ends of its new flights from Newark to its bases of San Francisco and Los Angeles, and no doubt a fare war with United will ensue as Virgin America in most of its markets lowers fares by roughly 30%. United will no doubt fight aggressively to retain customers on two of its prominent long-haul routes. Unlike the JFK-Los Angeles/San Francisco routes where there are numerous competitors, United and Virgin America are essentially going head-to-head on flights from Newark to those major California markets. The ensuing fare battle will benefit consumers, but will inevitably extend the time those markets reach profitability for Virgin America.

A mixed bag with Anchorage, Austin and Las Vegas

Rounding out Virgin America’s new route push during the first half of 2013 is new service from San Francisco to Austin, Texas and seasonal service between San Francisco and Anchorage, Alaska. It is also introducing service from Los Angeles to Las Vegas.

The carrier joins United and JetBlue on the San Francisco-Austin pairing with six daily flights beginning in May-2013. During 19-May-2013 through 25-May-2013 when Virgin America is scheduled to launch flights, JetBlue will account for 35% of the nearly 3,000 seats on offer in the market with United holding the remaining 65% stake. United mostly operates 70-seat Bombardier CRJ700s in the market while JetBlue flies Airbus A320 narrowbodies between San Francisco and Austin. 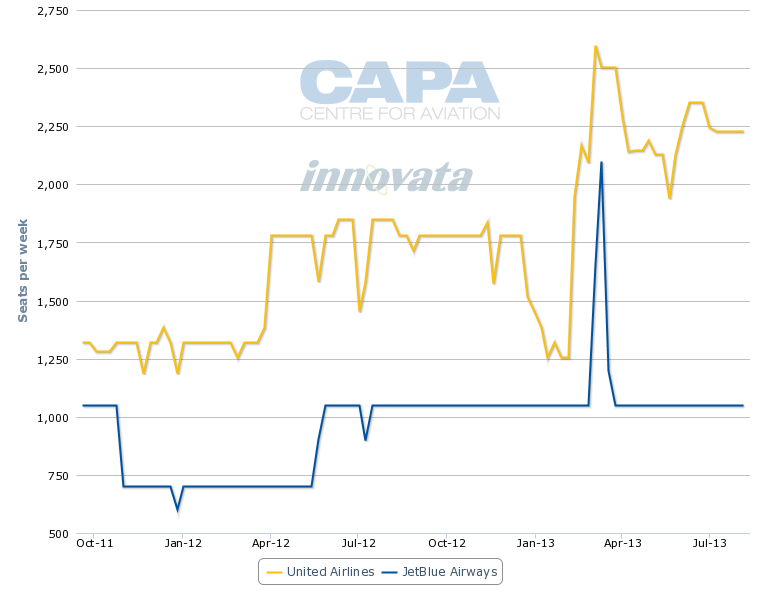 Virgin America and JetBlue offer similar, hybrid products that offer medium frills for passengers seeking lower fares but a favourable customer experience. Unlike JetBlue, Virgin America does offer a first class, so the carrier could gain some passengers originating in each market that would prefer a more competitive premium product over United’s two-class regional jets and JetBlue’s extended legroom offering. The technology industry is strong in both Austin and San Francisco, giving Virgin America a product edge among younger travellers in the market who prefer to be connected in-flight through Virgin America’s Wi-Fi offering. Austin is also a popular leisure destination that draws visitors to its diverse music offerings. Virgin America should not have a problem targeting a mix of business and leisure travellers on the route, but the competitive response will be typical, which will in the short term affect the profitability of all carriers in the Austin-San Francisco market.

Virgin America will become the sixth airline serving Los Angeles-Las Vegas when it launches flights in Apr-2013. Once it introduces service the carrier will account for 7% of the 30,750 weekly seats on offer. Southwest will hold a 36% share followed by Delta’s 20%, United’s 12% and 7% held by Spirit. It is tough to find a compelling reason why Virgin America is entering an existing crowded market that has ample representation from both low-cost and legacy carriers, and it seems the profitability prospects would seem slim in a market with a higher percentage of leisure travellers. 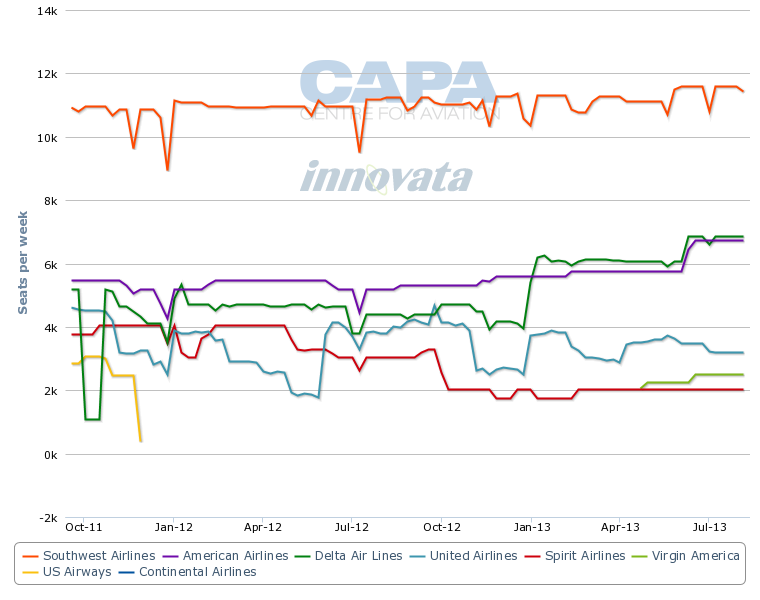 Virgin is picking some tough fights...

On its seasonal flights to Anchorage that run from Jun-2013 to Sep-2013 Virgin America is competing with United, which will offer roughly 1,200 seats in the market when Virgin America starts service. Many carriers serve Anchorage seasonally during the northern hemisphere summer season, including JetBlue, which offers service from both Long Beach, California and Seattle.

Delta is also launching seasonal service between Seattle and Anchorage from Jun-2013 to Sep-2013. Virgin America has likely studied their service footprint and determined the route could be viable from its largest base.

The mix of leisure and business routes being introduced by Virgin America during 1H2013 are in a largely well-served market with seemingly little room for the stimulation needed for the carrier to achieve profits.

Any effort by Virgin America to steal traffic from its rivals will be met with a robust competitive response that will only serve to upset the profitability of all carriers serving those markets. While Virgin America has only eliminated two markets – Toronto and Orange County – in its five year existence, the carrier’s ongoing unprofitability shows its presence in crowded markets is not having the desired effects on its financial results.