VietJet Air places major A320 order. Is there room for another pan-Asia low-cost airline group?

Vietnam’s VietJet Air has become the latest Asian low-cost carrier group to announce a major aircraft order in support of an ambition to build a portfolio of LCC affiliates.

VietJet’s commitment to buy 62 A320 family aircraft may be small in comparison to the massive orders placed by AirAsia and Lion in recent years. But it is significant in that it shows VietJet is serious in becoming a pan-Asia player, following the model of AirAsia, Jetstar, Lion and Tigerair.

AirAsia, Lion, Tigerair and Jetstar operate across Asia-Pacific and dominate the Southeast Asian LCC market, accounting for about 77% of LCC seat capacity and 75% of the ASEAN-based LCC fleet. While Southeast Asia is a large and fast-growing market, five is a potentially unsustainable number of LCC groups, particularly when taking into account some of the countries also have very strong independent LCCs.

VietJet’s memorandum of understanding for 62 A320s and 30 purchase rights, signed 25-Sep-2013 in Paris as part of a visit to France by the Vietnamese prime minister, follows deals over the last year for 234 A320s from Lion and 100 additional A320s from AirAsia. Once firmed up, the new VietJet deal will take the total number of aircraft on outstanding order by the Lion, AirAsia, Jetstar, Tigerair and VietJet groups to nearly 1,200.

Notes: *only includes aircraft ordered directly from manufacturers
A relatively small portion of Lion’s orders will end up at the group’s full-service subsidiary Batik
AirAsia includes AirAsia X
VietJet's new order is included although for now it is only an MOU
Source: CAPA Fleet Database

These five LCC groups currently have nearly 450 aircraft, including only nine at VietJet. Of the total fleet, about 72% is now based in Southeast Asia.

The fleet will likely triple in size over the next decade when also factoring in leased aircraft and a potential relatively small top-up order from Tigerair. A majority of this growth will again be allocated to Southeast Asia as Lion is now entirely focused and AirAsia remains predominately focused on ASEAN.

VietJet’s order is hardly surprising as the fast-growing carrier has been looking to order aircraft to reduce its reliance on lessors, which have supplied VietJet with its current fleet of nine A320s. (This includes one A320 which was delivered this week and has not yet been placed into service.)

VietJet plans to lease one more aircraft by the end of 2013 and seven more in 2014 before deliveries of the 62 aircraft being purchased directly from Airbus start in 4Q2014 with an initial batch of two aircraft. The deliveries will span through 2022, providing a pipeline of between five to 10 aircraft per annum. Airbus has stated that the 62 aircraft include 14 current generation A320ceos and six current generation A321ceos as well as 42 re-engined A320neos.

The size of the order may seem large for an airline that has a very low international profile. But VietJet had already signalled its intentions to grow by establishing affiliates in other Asian markets, starting with Thailand and followed likely with Myanmar. If VietJet succeeds at launching multiple affiliates five to 10 aircraft per annum could prove insufficient, leading to more orders and/or the carrier going back to the leasing market to supplement its orders.

Thai VietJet is already in the process of being certified and plans to launch services in early 2014, initially using some of the additional leased A320s the group expects to take in 1H2014. VietJet owns 49% of the new carrier with small Thai regional carrier Kam Air owning a majority 51% stake.

VietJet also has said it is planning to establish another new affiliate in 2014, giving the group a portfolio of three LCCs. VietJet is discussing a joint venture with a potential partner in Myanmar, a fast-growing Southeast Asian market which has only one independent LCC and does not yet have an affiliate from any of Asia’s LCC groups. VietJet also has been exploring opportunities in North Asia, including China, Japan, South Korea and Taiwan.

The strategy is bold as VietJet will undoubtedly run into competition anywhere it turns. Thailand already has two low-cost carriers with a third to be launched ahead of Thai VietJet.

Thailand will be the second market in Southeast Asia after Indonesia to see a battle between three LCC groups – AirAsia, Lion and VietJet. Thai Airways affiliate Nok is also a strong competitor, having used its first mover advantage to become the country’s largest domestic carrier and is now pursuing fleet and international expansion using proceeds from its recent initial public offering.

In Indonesia, Lion now faces increasing competition from AirAsia and Tigerair although Lion remains the dominant carrier. Malaysia, the Philippines, Singapore and Vietnam each currently have affiliates from two of the five groups. The Philippines also has a very strong independent LCC in Cebu Pacific, which accounts for about half of the domestic market.

Southeast Asia’s other four countries – Brunei, Cambodia, Laos and Myanmar – do not yet have any affiliates or subsidiaries from the five groups. But Myanmar will likely have at least one and perhaps two affiliates over the next year as Myanmar emerges as Asia’s next big growth market.

Cambodia could also potentially see a LCC although it is a much smaller market. Brunei and Laos are very unlikely to support a local LCC.

In Australia, there are also already two carriers from the five groups with Jetstar Airways and Tigerair Australia.

In North Asia, there is a much higher portion of LCCs from outside the main groups. Establishing an affiliate in the biggest North Asian market, China, is currently not feasible due to the regulatory environment. Japan has just one affiliate from a major group, Jetstar Japan, now that AirAsia has withdrawn. Jetstar is also now seeking to establish an affiliate in Hong Kong.

Taiwan does not have any LCCs but could potentially support an affiliate from one of the five groups. There is also some interest in South Korea, which currently has five LCCs, all of which are relatively small. Two are owned by South Korea’s main full-service airline groups while the other three are independent.

Groups to account for half of all LCCs in Asia-Pacific

In total there are now 45 LCCs in Asia-Pacific. The upcoming re-launch of Hong Kong Express as an LCC and the expected launch of Thai Lion, Thai VietJet, Thai AirAsia X, Jetstar Hong Kong, Spring Airlines Japan and India AirAsia could bring the total to 52 by mid 2014.

Of these 52, 24 will be affiliated with AirAsia, Jetstar, Lion, Tigerair or VietJet. (If including China-based Spring as a sixth Asian LCC group, 26 or half of the LCCs in Asia-Pacific would be part of groups. Spring currently operates 37 aircraft, all based in China, but does not have any aircraft on order with manufacturers.)

While some of the region’s smaller LCCs could be vulnerable, independent LCCs which have strong positions in their home markets have bright outlooks. For example, IndiGo and Cebu Pacific are among Asia’s largest LCCs but do not have pan-Asia strategies. They may be less ambitious but by avoiding temptation to launch in other markets, their strategies are inherently less risky. Not everyone can succeed at becoming regional players.

Recent troubles at some of the new affiliated LCCs have shown that simply being part of a major LCC group does not guarantee success. For example both Tigerair and AirAsia have struggled in the Philippines market, where only Cebu Pacific has been profitable.

VietJet has confidence after succeeding in Vietnam

While VietJet will have an uphill battle as it establishes new affiliates in an intensely competitive Asian marketplace, it does have experience competing with another major LCC group.

VietJet, which launched services in Dec-2011, didn’t have first mover advantage in Vietnam. It followed Jetstar Pacific by more than three years. But less than one year after launching services, it overtook Jetstar Pacific as Vietnam’s largest LCC and has since steadily widened the gap. 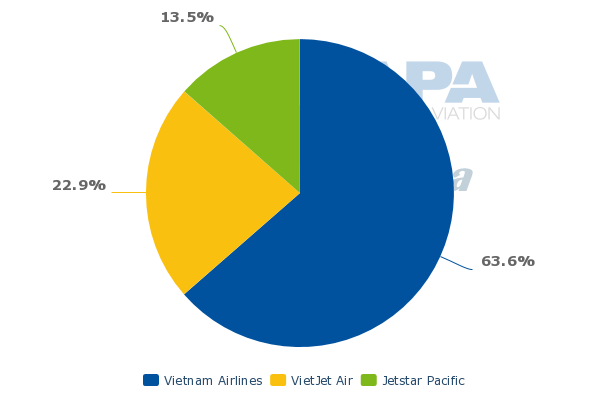 VietJet is poised to further grow its share of the domestic market in 4Q2013 as it places into service two more A320s and launches three more domestic routes. The carrier will have 37 daily flights across 14 domestic routes in Nov/Dec-2013, giving it over 93,000 weekly seats in Vietnam’s domestic market. This should give it a 25% share of domestic capacity, compared to about 62% for Vietnam Airlines and 13% for Jetstar Pacific.

Further large gains in domestic market share could be challenging given the strong position of Vietnam Airlines, which also owns a 70% stake in Jetstar Pacific. VietJet needs to diversify by expanding in Vietnam’s international market, where it currently operates only two routes, and entering other Asia markets.

While VietJet is private and competes against a government-owned carrier, its expansion in other Asian markets will be warmly supported by the Vietnamese Government. It is significant that the MOU with Airbus, which should become a formal order within the next few months, came during a trip to France by the Vietnamese prime minster. As VietJet establishes affiliates in other countries, it could become a model Vietnamese company.

The order may be the largest ever from a Vietnamese airline but there should not be any problems finding homes for the 62 aircraft if VietJet succeeds at establishing affiliates in other countries.

The nearly 1,200 aircraft now on order from Asia’s main LCC groups is eye opening. There will certainly be sceptics. But Asia’s LCC sector, given the region’s strong economic growth and increasing size of the middle class, is potentially big enough to support all the aircraft. However, that doesn’t mean there may not be some casualties as an increasing number of groups battle it out in an increasing number of markets.