All Nippon Airways' second attempt at a Tokyo-based LCC remains a conservative effort. Vanilla Air, the re-branded AirAsia Japan, now operates six A320s, up from the peak of five that AirAsia Japan operated.

Vanilla is planning for a fleet of 10 A320s in Mar-2016, representing significantly slower growth than seen at Japan's two other new LCCs, Peach and Jetstar Japan. The majority of Vanilla's ASKs are in the domestic market, but within five years the carrier expects to derive 70% of revenue from the international market.

Vanilla Air will shortly add its fourth domestic destination, Amami, while the international market is experiencing some setbacks. Vanilla would like to add services to Taipei but the carrier has been unable to secure slots. Taiwan and Korea have been popular short-haul markets from Japan, but the Japan-Korea market continues to experience a setback due to tension.

Vanilla Air launched in Dec-2013, having previously operated through Oct-2013 as AirAsia Japan, a JV between Malaysia's AirAsia Group (49%) and ANA (51%). After disagreements between the two, ANA bought out AirAsia's stake, assuming 100% control of the carrier.

ANA faced a number of options for the airline, ranging from shutting it down to a partnership with Osaka Kansai-based Peach. ANA ultimately decided to re-launch the carrier at its existing Tokyo Narita base, requiring it to re-build the operation because AirAsia Japan's aircraft, sourced from the AirAsia Group, were returned.

Vanilla Air launched under its own brand with three new-build A320s while three ex-ANA aircraft have since joined the fleet. The three additional aircraft were built in 1991 and 1992, making them some of the oldest A320s. That gives them an operating disadvantage further worsened by Vanilla operating them in the 166-seat configuration ANA used as opposed to the 180 seat configuration Vanilla uses on its first three A320s. Jetstar Japan and Peach also use a 180-seat configuration on their A320s.

Vanilla Air senior executive vice president Katsuya Goto told the recent ISTAT Asia conference in Hong Kong that the three ex-ANA A320s, each over 20 years old, will be replaced in 2014 with new aircraft. Two additional deliveries will give Vanilla Air eight A320s by the end of Mar-2015 and a further two deliveries in the following year will give it 10 aircraft by the end of Mar-2016.

This represents significantly slower growth than even Peach. Peach is considered to have grown conservatively, amassing 12 aircraft in two years of operation. In comparison, Vanilla's current plans calls for it to have 10 aircraft in 2.5 years. Jetstar Japan has grown even faster – arguably too fast – amassing 18 aircraft in about 1.5 years.

While Vanilla Air's brief operation of older aircraft in a low density configuration may defy logic, the costs are offset by Vanilla needing to gain scale and utilise its staff, who were maintained from the AirAsia Japan operation despite the decrease (and brief pause) in flying.

From 01-Jul-2014 Vanilla will have daily service to Amami, considerably smaller as Japan's 55th busiest domestic airport. The service is being subsidised by JPY2700 million (USD27.6 million) under the  “Amami Archipelago Promotion Fund” to boost the economy of Amami, an island more than halfway between the southern tip of Kyushu and Naha in Okinawa.

Amami currently only has service to Osaka Itami and Tokyo Haneda, both operated by JAL. This marks Amami's first LCC service, and the first ANA-related brand to serve Amami.

Jetstar Japan has been entering ANA-only destinations, and ANA is now using Vanilla to enter JAL-only destinations. Whatever the case may be for the airlines, undoubtedly it is the airports and local economies that benefit the most, a guiding reason for Japan to permit so many new entrant airlines.

Mr Goto has been keen for Vanilla Air to grow its current Tokyo Narita-Taipei Taoyuan service beyond double daily but said the carrier has not been able to secure additional slots at Taipei. Growing Tokyo Narita-Seoul Incheon services is unlikely in the short term according to Mr Goto due to tensions between Japan and Korea impacting the travel market. Vanilla Air in Mar-2014 said 60% of Taipei tickets are sold in Taiwan while only 30% of Seoul Incheon tickets were sold in Korea.

Vanilla Air will however soon expand internationally, Mr Goto confirmed. While he did not specify markets beyond saying destinations within four hours of Tokyo Narita, local reports speculate Vanilla Air will launch to Guam and/or Saipan. This would be consistent with previously stated intentions from Vanilla Air and ANA.

See related report: Vanilla Air to give owner ANA a presence in abandoned markets while offering a hybrid model

Vanilla Air expects 70% of revenue to come from international market

Vanilla's focus on international flying mirrors that of sister LCC Peach Aviation, which also sees itself ultimately flying more internationally than domestically. In May-2014 51% of Peach's ASKs were in the domestic market. Jetstar Japan meanwhile remains an entirely domestic operator. 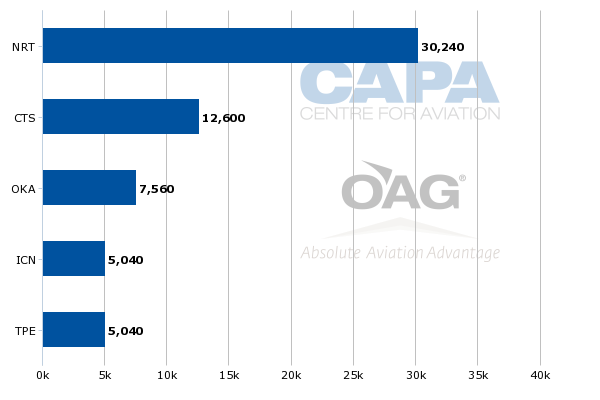 Vanilla Air president Tomonori Ishii in May-2014 told the local Japanese press that its unit cost was above JPY7 (USD 6.85 cents) and aims to be at JPY7 (USD 5.89 cents) once the carrier reaches 10 A320s in 2016. Even a JPY7 operating cost would place Vanilla Air below Skymark, a fact which perhaps needs more supporting evidence as Skymark has greater scale while Vanilla Air is still seeking to be disciplined and take costs out of its business.

Unspecified profits are targeted for FY2015, a surprisingly short time frame for a LCC. Peach Aviation is understood to have been profitable in its second year while Jetstar Japan was unprofitable.

Outlook: Conservative approach may be sign of undefined future

Even in contrast to Peach, which has sought a low profile and steady growth, Vanilla Air looks conservative. At the other end of the spectrum, Jetstar Japan grew too quickly and essentially had growth curtailed by Japan's regulator, from which the carrier is only now emerging.

LCCs continue to shake the status quo of aviation in Japan, but for Vanilla Air it can still find a better balance. Increasingly it appears its small size is due to conservatism resulting from an undefined vision.

Vanilla Air is not to be blamed entirely. Its re-establishment was quick after the AirAsia-ANA JV dissolution. Vanilla Air has not benefitted from a year or more of planning, or the support of a larger group. But ultimately Vanilla's success will not be judged on how much it did, all things considered, but rather on gross achievements.

There is room for Vanilla Air to do more, as indicated by a quick realisation of profits. As the carrier becomes familiar with itself, it should consider bolder expansion.