US regional airline strategies in place for the future

Even as manufacturers were recounting the changes the regional airline industry is facing in this decade, regional airlines themselves seemed little concerned, secure in their good relationships with their major carrier counterparts and looking for diversification that remains in the capacity purchase model.

The regional airline heyday is gone according to those attending the RAA meeting in Milwaukee and growth rates that saw regional ASMs growth of 168% and revenue passenger mile growth of 246% between 1999 and 2008, has ended in favor of a period of highly constrained growth owing to changes with mainline partners.

Regionals are facing structural changes including the mass expiration of no less than 468 aircraft covered by current capacity purchase agreements between now and 2016, aging fleets and an opaque landscape dealing with future aircraft. Regionals operated 1,842 regional jets at the end of 2009 with an average age of 6.8 years compared to the 12+ years for both mainline wide and narrow bodies. The vast majority of the regional fleet remains jets with less than 500 turboprops. 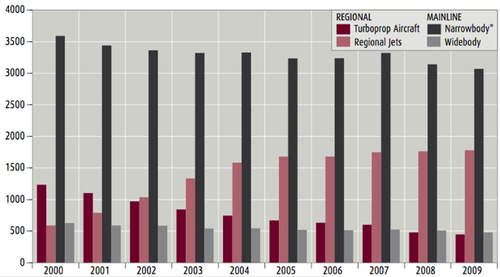 Manufacturers are reporting increasing interest in larger aircraft which is news to no one, but they are also making the case for the actual realization of a turboprop resurgence that has been predicted for the last half decade. That would replace what ATR calls the “regional jet mania” that has described the industry in the last decade and a half. In addition to higher costs from increased regulatory oversight stemming from the Colgan accident and Department of Transportation consumer initiatives, the airlines are facing increasing maintenance costs with their aging fleets. US regional market changes drive jet vs turboprop debate

Majors are already signaling a need for more risk sharing between majors and regionals which undoubtedly means compromises to those hefty pass-through costs which have been so beneficial to regionals no matter what the economy. Some are even predicting a return to the old pro-rate deals such as those SkyWest cut with both United and AirTran recently.

Then there are the higher financing costs if they start to re-fleet to accommodate the expected changes not only in reduced margins (from 10-14% to 4-6%) but to accommodate coming environmental rules. Labor costs are expected to rise as is the cost of hiring and training if legislation in Congress comes to pass.

It is also clear there will be significant rationalization in the Delta Connection fleet as contracts expire and probably the United-Continental fleets should that merger be approved meaning far less business to pass around in an industry that still numbers 62 reporting airlines, according to the Regional Airline Association. Certainly, that is how Republic Airways Holdings CEO Bryan Bedford sees it when he suggests his company’s moves into the low-cost industry are a hedge against the coming changes.

Citing the USD58 billion in losses over the past 11 years, Bedford said: “The industry we have over competed which resulted in over capacity and being over hubbed and now we are facing the difficult decisions in rationalizing hubs, routes and capacity. Focus cities are shrinking at St. Louis and Raleigh/Durham and now regionals serve them. I still believe we are headed for a threesome amongst mainline carriers. The demand for our class of product is tied to the health of our partners and the hubs and as they are downsized we face decreasing demand. But there is still a vital need for feed, for good reliable service and a cost-competitive product. The industry is now trying to evolve and grow.”

Regionals are also facing simultaneous rate and capacity cuts from their major partners and it is not assured that there will be more outsourcing. Key to this will be scope relief which is in question as new contracts are negotiated. This is the most activist labor environment in decades and crews and pilot groups are actively lobbying against further outsourcing although it is expected that majors will require scope relief in order to address employee efforts to be made whole. But this is a negotiating game and more outsourcing to regionals may be the price for the achieving further gains from a decade of concessions.

This is an extract from a CAPA report in today's America Airline Daily. The full report, available for individual purchase, contains the following sections/graphics: