US-Cuba: US regulators must weigh likely demand in a hotly contested race to resume flights

The forging of a new bilateral air services agreement between Cuba and the US has resulted in numerous airlines vying for available frequencies between the two countries. Service requests are wide-ranging – full service airlines, LCCs, ULCCs and smaller airlines such as Silver Airways are competing to seize on an opportunity to serve Cuba. US regulators are in the process of evaluating the proposals from those airlines, but the proceedings are obviously very different from more typical route awards. The government has no historical data to study demand patterns in weighing the merits of the route requests submitted by US airlines.

Two of the many US airlines vying for new service – American and Spirit – have offered suggestions to gauge the market for new scheduled flights from the US to Cuba. American has the view that it is prudent to examine data from charter operations, and the census data showing the largest Cuban American population centres. Spirit offers another point of reference, noting that the Dominican Republic could serve as a proxy to estimate the market potential for Cuba, highlighting similarities between those two countries. Obviously other airlines competing for flights to Cuba will weigh in with their own suggestions to determine the market size.

One important element to consider, as the resumption of scheduled service between Cuba and the US moves closer, is whether Cuba’s infrastructure – airports and hotels – has the ability to support an influx of travellers from the US. Other unknowns are the actual costs of operating to Cuba, and methods to enforce adherence to the categories of travel stipulated in the new air services agreement.

A new agreement between the US and Cuba allows for 110 flights per day between the two countries – 20 to Havana and and 10 each to nine other Cuban airports.  Airlines have submitted their service requests to the US DoT for evaluation, and the agency is weighing the merits of those proposals.

A challenge for the US government is determining an accurate level of demand to Cuba, given the 56-year absence of commercial service between the two countries. The bilateral currently limits travellers to 12 categories of travel purpose, and leisure travel is formally prohibited.

Due to the long gap in scheduled service to Cuba, American Airlines has told US regulators that other data points are necessary to judge service proposals. Due to restrictions on travel to Cuba for leisure and tourism, demand for tourist travel would not be an appropriate factor in the route evaluations, said American. In mid-Mar-2016 the administration of President Barack Obama did ease restrictions in the 12 established categories; person-to-person visits for educational purposes are now permitted, according to news outlet Reuters. Previously, educational trips were limited to groups sponsored by a US-based organisation and accompanied by a guide.

From American’s perspective, there are two relevant data points in determining demand – the largest Cuban American population centres and current charter operations to Cuba. Those two data points are, unsurprisingly, favourable to American. The airline is the largest airline operating at Miami International airports, which is located in the highest Cuban American population centre in the US. American also operates the greatest number of charter flights between Cuba and the US.

Although US regulators will obviously study those two data points as their assessment of proposals continues, other considerations must also influence their decisions. One important factor is ensuring that access to Cuba is spread among airlines/operations of different sizes, and across different business models.

In fact, American’s suggested data points are arguably logical, and provide some insight into potential demand patterns between the two countries. Nearly every airline seeking rights to serve Cuba stated that South Florida has the largest concentration of Cubans in the US.

Cuban American population in Miami-Dade county versus the US total

US airlines operating charter service to Cuba in 2015

American offered a data snapshot of its charter service from Jan-2014 to Feb-2016. During that time it operated roughly 24 city pairs – seven in 2014, eight in 2015, and nine in 2016 (Jan and Feb). In that period the airline operated 2,327 charter flights transporting 452,008 passengers, and during that time more than 90% of the airline’s charter passengers originated in Miami.

The data points offered by American are designed to convince regulators of the merits of its proposal. All the same, there is some logic to the company’s argument about initial demand patterns between the US and Cuba centred in areas with the highest concentration of Cubans living in the US, and South Florida is by far the largest population centre for that particular ethnic group.

Spirit Airlines, which is headquartered in Fort Lauderdale and is the third largest airline at the airport measured by seats (14-Mar-2016 to 20-Mar-2016), believes that the Dominican Republic offers a favourable comparison of potential market size between the US and Cuba, noting that the two countries have similarly sized economies and populations.

Population and economic (GDP) comparisons between the Dominican Republic and Cuba

One of the 12 stipulated categories for travel under the new relaxation of travel restrictions between the US and Cuba is family visits, and one of Spirit’s primary passenger segments is visiting friends and relatives (VFR). The airline stated that the Dominican Republic and Cuba’s largest cities have a mix of VFR and potential leisure traffic, and others cater mainly to VFR or leisure travel only.

One of the important discussion points in service between Cuba and the US is the infrastructure in Cuba to handle an influx of visitors from the US. Spirit stated that many of the smaller Cuban airports eligible for new flights from the US “have (a) smaller infrastructure in place today given the long absence of flights to the US, and could be overwhelmed by the addition of 10 to 20 flights per day from the US alone”. 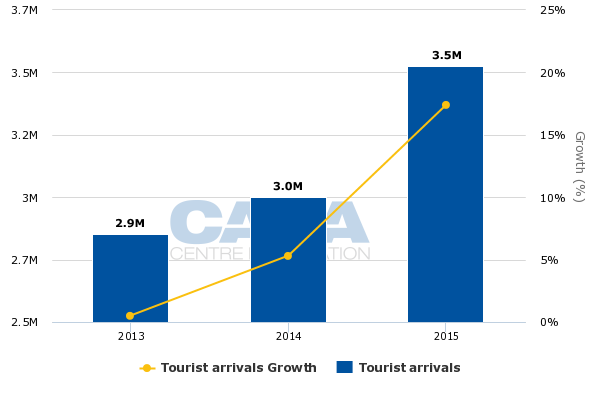 American, also, has warned of serious infrastructure limitations at Cuban airports and limited hotel accommodations. There are also more practical issues to consider. As scheduled flights to Cuba resume there are two significant practical issues: landing fees at Cuban airports and the methods that the US and Cuba intend to use for verifying that travellers between the two countries justifiably fall into one of the 12 designated (opaque) travel categories. A large portion of the responsibility will fall to US airlines, which need to make a careful evaluation and understand the process before scheduled flights commence.

The allure of US airlines resuming scheduled flights to Cuba has now transitioned to regulators determining which airlines can offer the most viable service, while ensuring broadly equal access for all airlines.

The task is made all the more difficult by a lack of meaningful traffic patterns for study to determine the viable candidates. Despite the challenges facing US regulators in evaluating airline service requests, flight awards granted to Cuba will be some of the most closely watched in US airline history.