US carriers should brace for a slight dip in domestic demand this year as the US Federal Aviation Administration (FAA) predicts that traffic on mainline carriers will fall by 0.4%. The agency believes uneasiness over the country’s sluggish economic recovery will dampen demand after traffic grew at a healthy 3.4% clip in 2011. But trends are expected to begin improving next year, with the FAA forecasting domestic traffic growth at an annual 2.7% rate throughout its 20-year forecast period.

Demand for international traffic to and from the US is predictably more robust, as the maturity of the US market deepens. FAA forecasts annual traffic growth in international markets of 4.3% during the next 20 years.

Overall the US industry in 2011 recorded a domestic capacity increase of 2.9%, and the first total capacity increase (domestic and international) in three years of 3.4%, according to the FAA forecast. But despite the expansion of supply, demand remained strong throughout the year, driving yields (adjusted for inflation) in the domestic market up 2.9%.

Capacity will shrink this year after growing in 2011, with mainline carriers posting a 0.8% decline and US regional airlines that largely feed major airlines pulling their supply down by roughly 0.5%. 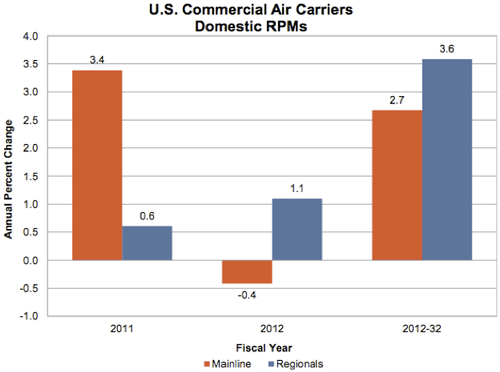 Beginning in 2012, regional capacity growth is expected to outpace US mainline carriers during the next 20 years on an annual basis by one percentage point. That is driven from the widely-known distaste for 50-seat regional jets exiting the fleet in favour of larger 70 and 90-seat jets. Average seating capacity on US regional aircraft is expected to grow from 56.4 seats in 2011 to 56.9 in 2012. Over the course of the FAA’s forecast throughout 2032, the average number of seats on regional aircraft should grow to 66.4. 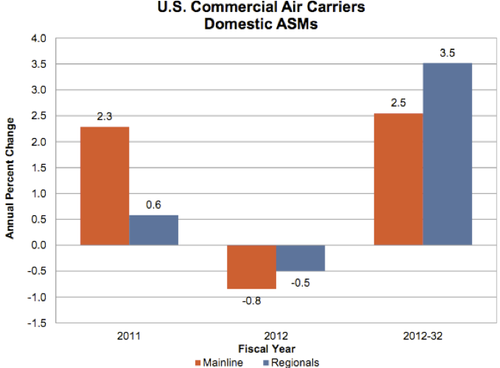 Yield growth among US mainline carriers is expected to slow this year to just 1.2%, driven in part by what the FAA assumes is of softening demand.

The FAA believes increasing competition and a convergence of cost structures between network and lost carriers will drive yields down. The FAA reasons network carriers will achieve productivity gains by retiring fuel inefficient aircraft and hold labour costs down while low-cost carriers will face maturing work forces, ageing fleets and potential unionisation.

Despite the agency’s forecast of softening demand this year, management teams at most US carriers entered 2012 holding a firm belief that the demand environment would hold steady during the next 12 months.

While two months hardly accounts for a trend, the large US major carriers reported strong passenger unit revenue growth during the first two months of the year, which is typically a slow travel time. Delta Air Lines grew unit revenues 14.5% and 13% in January and February, respectively, on modest traffic growth of 0.3% and 1.7% year-over-year. US Airways posted unit revenue gains of 10% in January on 3.8% traffic growth and a 7% rise last month on a 7.9% traffic increase. United Airline’s traffic fell both months, but in January its unit revenues grew 8.5%-9.5%. Southwest Airlines, second behind Delta in terms of domestic traffic, recorded a 3.9% rebound in traffic growth during February after posting a 2.7% decline in January.

International traffic on US flag carriers will also throttle down this year to 2.2% growth after rising 4.9% last year. Traffic growth this year to and from Latin America will eclipse the Pacific, where traffic jumped 7.4% in 2011 despite the sharp fall-off in demand following the Mar-2011 earthquake and tsunami that struck Japan. In 2012, the FAA expects only 2.2% traffic growth in the Pacific, a 5.2 ppts decline year-over-year. 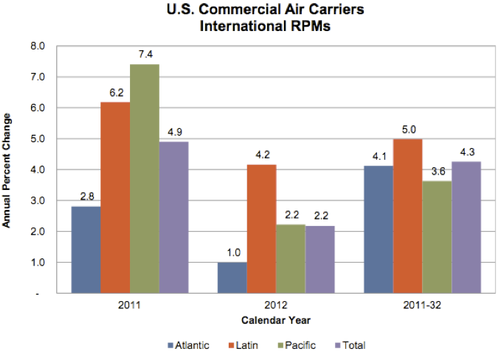 Traffic growth on Latin American routes operated by US carriers will only fall 2.0ppts this year. The FAA forecasts the region will lead international traffic growth for the next 20 years, growing at an average yearly rate of 5%. Traffic from the US to Latin America is growing despite a leveling off of GDP growth in the region’s economic powerhouse Brazil. The country’s estimated GDP growth this year is 3% after it recorded 7.5% growth in 2010. Estimated annual growth from 2013 through 2016 is 4.2%. Despite the slowdown in Brazil’s GDP, the FAA estimates total travel demand on all carriers between the US and Brazil will grow 6.2% annually over the next 20 years.

American Airlines has scheduled capacity increases this year for Latin America, and Brazil in particular. Latin America has been American’s highest-yielding market for over 10 years.

Based on schedules for April of this year, American is the capacity share leader between the US and Brazil at 30%. Star Alliance carrier TAM is a close second at 28%. In addition to American, TAM is also targeting capacity increases in the US market. 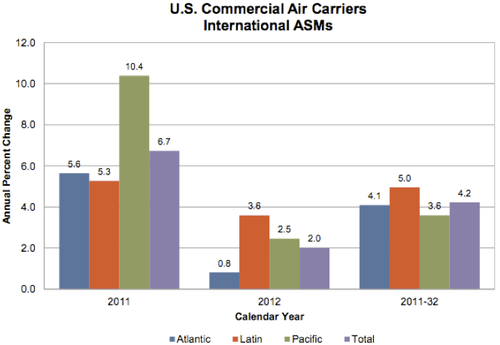 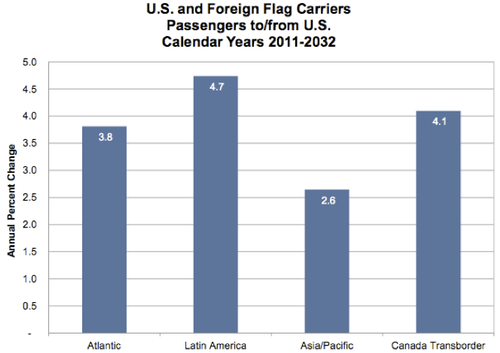 US mainline carrier fleet growth will average 97 aircraft per year during the 20-year forecast period. Assuming a relaxation of scope clauses in US major airline pilot contracts, which cap the number of jets with more than 50 seats that regional carriers are allowed to operate, the FAA estimates the number of aircraft in the 70 to 90-seat category will grow 1.7% annually through 2032 from a fleet of 1707 in 2011 to 2416. 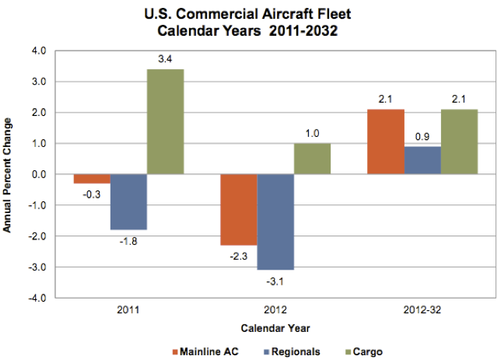 The importance of piston and turboprop aircraft will continue to decline, shrinking from 860 units in 2011 to 564 in 2032. The FAA estimates the total US regional fleet will be 2980 aircraft at the end of the 20-year period.

The US cargo fleet should grow by 15 aircraft during the next two years for a total of 894 by 2013 and a year-end total of 1345 in 2032. The FAA estimates the narrowbody cargo fleet will grow by six per year as converted Boeing 757s and 737s enter service. The widebody cargo jet fleet is projected to grow by 16 aircraft annually.

Even with some traffic trends showing positive signs, the FAA has refined its projections for US passenger levels hitting the one billion mark. The agency now estimates airlines achieving that traffic level in 2024, three years later than it forecast last year.

The culprits in the delay are delayed economic recovery in the US and abroad, especially Europe. Debt restructuring that has pulled Europe into a recession in early 2012, says the FAA, “has not helped the pace of US economic growth given the importance of trade with Europe”.