US Airways and Continental down, US airlines report another month of revenue decline

Mixed results for North and South American carriers on Friday (18-Dec-2009) pushed the AMEX Airline Index into negative territory, down 0.4% at the end of trading. The fall was the result of another gain in oil prices, up 1.4% to USD72.99. The wider market meanwhile gained slightly, with the Dow up 0.2%.

Approximately 1% fewer passengers travelled on US carriers during the month, while the average price to fly one mile fell 6.4%. Passenger revenue fell most sharply in trans-Atlantic and trans-Pacific markets.

ATA President and CEO, James C. May stated “while it's good to see the number of passengers beginning to stabilise after several months of pronounced declines, revenue remains depressed. Hopefully this is an indication that a gradual recovery is under way".

Meanwhile, domestic yields appear to be improving according to ATA, falling 4.6% year-on-year in Nov-2009, compared to a 12.5% drop in Oct-2009. Analysts at JP Morgan stated the improvement in domestic yields indicates a small recovery in Business travel demand. The analysts added that while domestic routes typically recover more quickly, international recovery is likely to overtake domestic recovery sometime in 1H2010.

US Airways removed from CreditWatch

US Airways (-2.0%) stocks were down despite Standard & Poor's lifting the carrier’s corporate credit rating from CreditWatch, as the ratings agency expects the carrier to make a recovery in 2010, citing improved revenue results and "reduced capital needs for aircraft". The carrier has been on CreditWatch since Jul-2009.

Continental Airlines (-2.1%) was downgraded from ‘Buy’ to Hold’ during trading by Stifel Nicolaus, after the carrier made some small changes to its 4Q2009 guidance. Jesup & Lamont meanwhile maintained its ‘Buy’ rating for the carrier.

Continental now expects a load factor of 81.5% for the quarter, while capacity (ASMs) is estimated to be down by 0.5% versus a prior estimate of a decline of 1%. 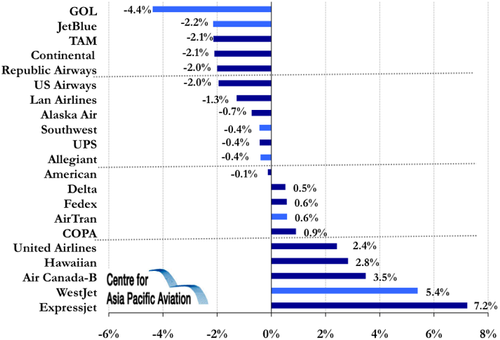