US Airways, AirTran and JetBlue lead the way up. GOL however, takes a dive.

GOL however, suffered as it reported a bigger than expected (BRR687.1 million, or over USD300 million) 4Q loss, issued a negative outlook and announced a capital raising. The Brazilian market darling lost 6.7% on the New York Exchange, as it quickly fell out of favour with investors.

The Wall Street Casino's treatment of US airlines was relatively restrained yesterday. Although the bells rang and lights flashed as starved investors rushed for the canapés, airline stocks pretty much went with the overall market.

Perhaps of most interest is the airlines which performed best yesterday. Although oil prices went up on the tide (and the impact of higher fuel prices is greater on LCCs than it is for network airlines), it was the lower cost airlines which attracted the greatest market attention.

This was presumably because investors saw the light at the end of the tunnel for the economy, a new twist in market trends. But it may be that later this week they will discover that the light was the proverbial express train coming in the opposite direction. 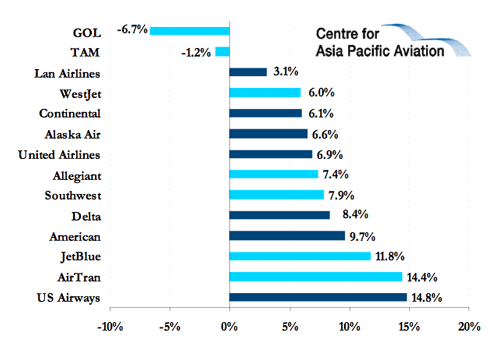