After JetBlue Airways ceases flights to Mexico City in early 2020, no US low cost airline will serve the market. JetBlue, along with Southwest and Alaska Airlines, had high hopes for Mexico City after they gained slots divested by Aeromexico and Delta as a requirement for those two airlines to launch their joint venture.

But over the course of the past year each of those low cost operators has pulled out of Mexico City, which is largely a business market. Given the dominance of Mexican airlines at Mexico City Juarez International airport, low cost operators targeting VFR or leisure passengers faced an uphill climb in making the market work, since capacity was growing at a fast pace.

Even as those airlines faced heightened capacity in the market, JetBlue is uncontested in two markets it is pulling from Mexico City and has suggested that routes to Juarez were simply not producing satisfactory margins.

The exit of all of those airlines shows that even the best predictions of a successful route performance can change quickly as market conditions shift.

After clamouring for available slots at the airport, US airlines decide to exit Mexico City

JetBlue has been serving Mexico City since 2015, when it launched service to Juarez International from its focus cities of Fort Lauderdale and Orlando International.

But the airline often said that its slot times were less than favourable, and it ended up obtaining slots that Delta and Aeromexico were required to divest in order to gain regulatory authority to establish their transborder joint venture.

Originally, JetBlue had aimed to launch flights from Los Angeles to Mexico City, but changed course and introduced service from Boston and New York JFK.

Southwest also gained slots from the Delta and Aeromexico divestment. At one point, it served Mexico City from Orange County alongside its service from Houston Hobby. The airline also planned to operate service from Los Angeles and Fort Lauderdale, but Southwest returned those slots and never launched those planned routes.

At the end of 1Q2019 Southwest exited the Mexico City market when it pulled service from Houston Hobby, determining that that market was more business oriented, and it could find better opportunities for the capacity it had deployed to Mexico City.

Alaska Air Group also gained slots from Delta and Aeromexico and launched flights from San Diego, San Francisco and Los Angeles. The Los Angeles-Mexico City market is highly competitive, and customers in San Diego have the option of crossing the border for cheap flights from Tijuana airport. Alaska no longer operates any services to Mexico City.

JetBlue serves Mexico City from its points of strength – Boston, JFK , Fort Lauderdale and Orlando. Those are the airline’s top four bases measured by seat deployment. 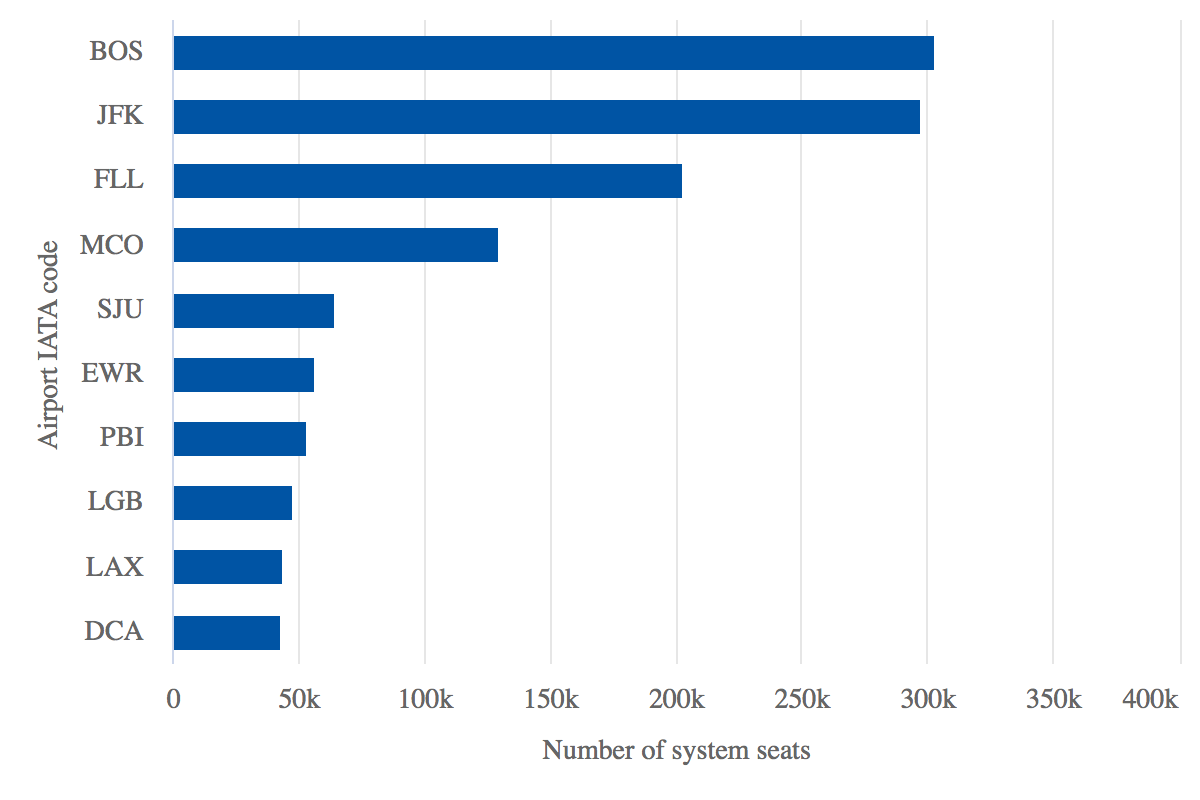 Recently, JetBlue executives remarked that the airline takes advantages of. “Opportunities where we see something underperforming, and not the ability to, in a meaningful way, turn it around such as our actions in Mexico City…”, company president Joanna Geraghty recently told analysts and investors.

Perhaps JetBlue rightfully concluded that it could garner a solid level of business traffic from Boston and JFK to Mexico City.

After Aeromexico dropped the Boston-Mexico City route in early 2019, JetBlue was the only operator on the route, and presumably could use its position as the leading airline in Boston to generate traffic on the route. JFK is a more crowded market, with Aeromexico, Delta, Interjet and VivaAerobus all operating services on the route.

From Orlando, JetBlue’s competitors to Mexico City are Aeromexico, Interjet and Volaris. Those airlines are Juarez’s three largest airlines measured by departing frequencies, and can leverage a certain point of sale strength in Mexico City.

JetBlue has no partnerships with those airlines, and while there should be a level of O&D demand from Orlando and JFK to Mexico City, having a partner for onward flights could have made those flights more viable.

But JetBlue’s partnership options are limited. Aeromexico and Delta are two years into their JV and Interjet is facing some financial difficulties and codeshares with American, so that is not a particularly attractive partnership option. 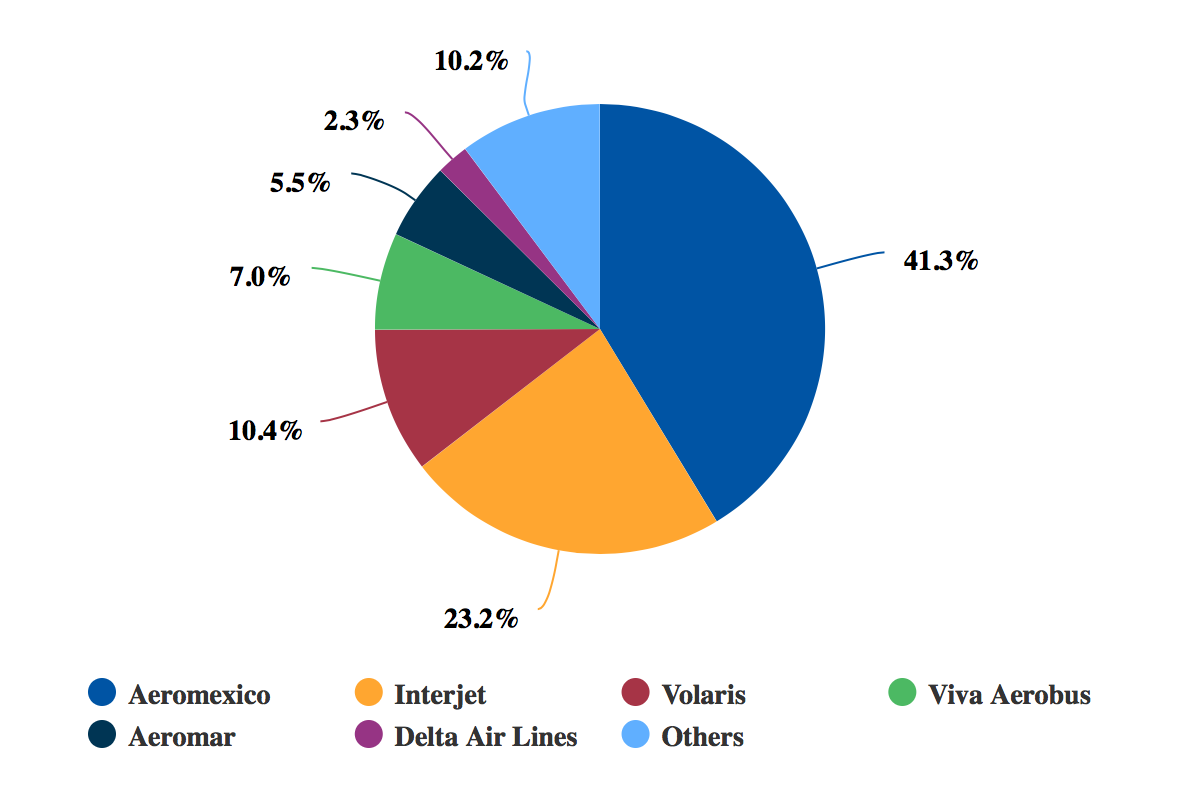 Overall, JetBlue represents approximately 5% of the seats on offer between Mexico City Juarez and the US, as of late Oct-2019.

JetBlue likely calculated that it could leverage its strength in US point of sale, given its strong presence in all of the markets where it offers flights to Mexico City.

But Southwest, JetBlue and Alaska added service to Mexico City at a time when US transborder travel to Mexico was increasing, putting pressure on fares in the market.

Although seats from Juarez International to the US have fallen by 16% year-on-year (as of late Oct-2019), after four years of operating services to Mexico City JetBlue has determined that it is not a viable market.

There has been some speculation that perhaps JetBlue could have captured more business travellers if it had deployed aircraft equipped with its Mint premium cabin on routes to Mexico. But that could have been a risky experiment, given the success of Mint on its existing routes, and the nuances of serving Mexico City, which include having a solid point of sale in Mexico.

JetBlue is not alone in deciding that Mexico City is not an optimal market for the low cost model, which largely centres on leisure passengers and visiting friends and relatives (VFR) traffic. All low cost operators are constantly working to bolster their share of corporate customers by touting their value proposition in contrast to full service airlines.

But in the end, Alaska, JetBlue and Southwest have decided that there are other, and more, opportunities with higher margins outside Mexico City, which ultimately means the market from the US to Mexico’s capital is not viable for low cost airlines based in the US.