US airlines increasing capacity for 1Q2011, but cutbacks seen beyond

US airlines took the opportunity of presenting at the JP Morgan Aviation, Transportation & Defense Conference to update investors on capacity plans for the first quarter and the year, although the United chart did not reflect the capacity drops planned post Labor Day at US Airways. Southwest, however, was standing firm on its guidance. 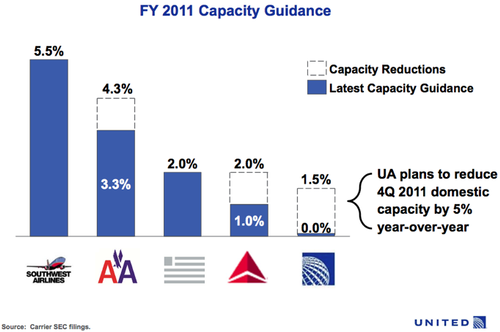 CFO Beverly Goulet said the company is looking at an average per-gallon fuel price of USD3.01 over the year and USD2.72 for the first quarter. It had guided to USD2.60 per gallon for the year.

Unit revenue, she said, is only being partially offset as first quarter unit revenue growth improves 4.1%-4.6%. 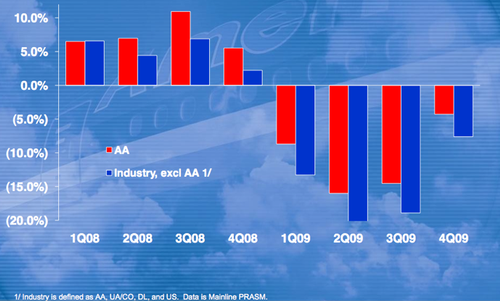 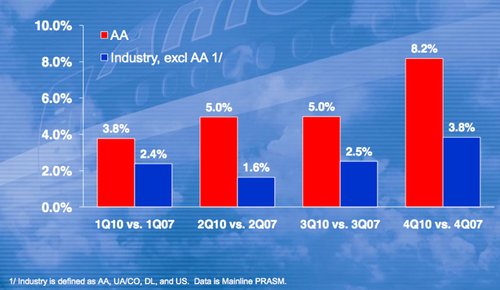 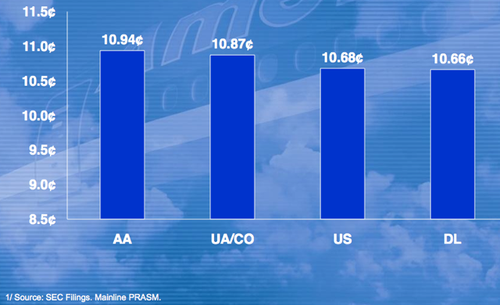 With a clear cost premium reflected by American’s chart, Ms Goulet also reiterated other carriers will close the labour gap with American in the next few years and produced an interesting chart of where everyone stands in the negotiating process. 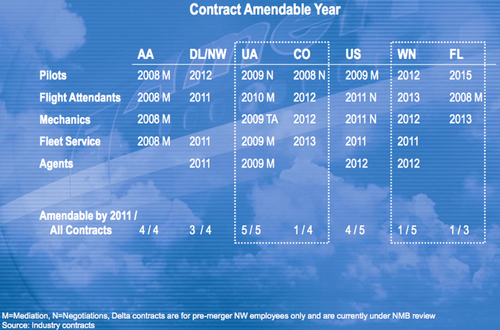 Delta President Ed Bastion noted 1Q2011 will be hit with the USD75 million cost of the winter storms in addition to the USD50 million revenue hit from the Japanese crises. He added additional fuel costs, projected at USD2.90 per gallon for the year compared to the USD2.60 originally assumed, will mean an additional USD3.25 billion in fuel expenses this year. The combined impact of fuel, storms and Japanese crisis, he said, amounts to about USD450 million for the quarter. 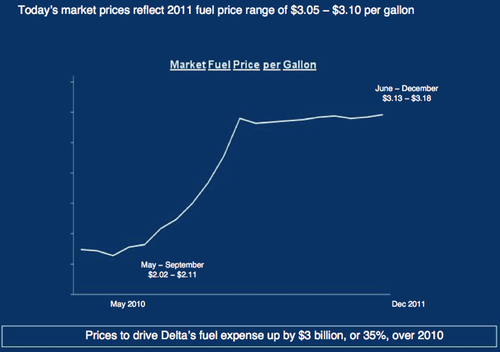 Mr Bastion said that 70% of the rising cost of fuel has been offset by this year’s eight fare increases, four of which Delta led.

Industry has raised fares in response to fuel hikes 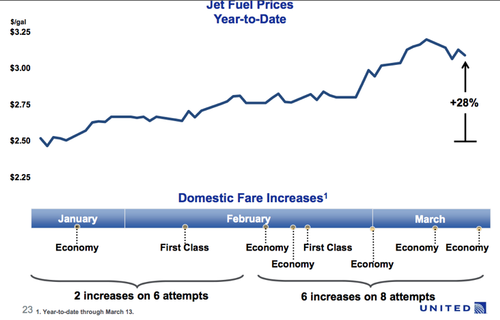 Delta unit revenue is expected to be 7-8% in the quarter while unit costs are expected to rise between 10-11%. He pointed to the “unprecedented level of pricing discipline” for the industry that has often restricted itself to discussing only capacity discipline. Coupled with increased fuel management, he expected 1Q2011 operating margins in the range of -2% to -3% prompting a drop in second half capacity by four percentage points from its 12-13% increase capacity guidance.

For the first quarter, the airline expects system capacity to jump 4-5% on only a 1-2% rise in domestic and a 12-13% surge in international capacity. The markets slated for cutbacks are those that do not keep pace with rising fuel. Mr Bastion also said Atlantic revenue was down 2-3% while unit costs were up 11-12%, reflecting a continuing softening of the trans-Atlantic market.

“That will be our focus as we start to get into busier period,” he said. “The forward bookings are healthier and are up 7-8% but we know in the softer periods we’ll have to be ready with capacity actions and we are now working with our partners at Alitalia and Air France/KLM to coordinate our capacity response which is expected to be about 6-8% capacity cut post Labor Day from the prior year. That is pretty dramatic.” 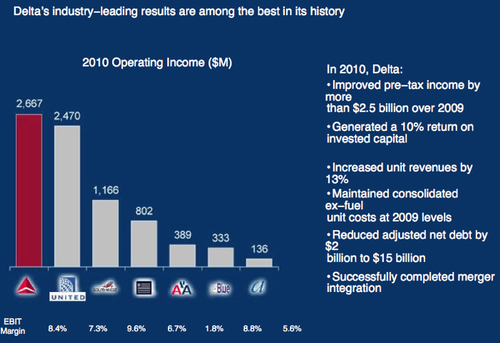 United, on Monday, issued its investor update for the first quarter, indicating its results will be better than expected, despite the measurable impact from the triple Japanese disasters. First quarter passenger unit revenue is expected to be up 10-11% from 1Q2010 when capacity will only be up only 1.2% year on year, based on a 2.1% drop in domestic flying and a 5.7% increase in international capacity. First quarter unit costs, it said is expected to be up between 2.75% and 3.25% from first quarter 2010 for the quarter when it is looking at USD2.76 per gallon. It is cutting domestic capacity between 2-3%, a half a percentage point below previous guidance. Systemwide, capacity for the year is expected to match 2010.

CEO Jeff Smisek reported that the shift of Easter into the second quarter creates a 300 basis point drop in the March quarter but said that, overall, its impact would be made up in the June quarter.

United’s guidance suggested that domestic is up 1.4% compared with international down 4.1%. Not unexpectedly, the uncertainty in Japan is forcing Pacific advance bookings down 2.6 points. The softening of the trans-Atlantic market was also in evidence during the presentations after United said Atlantic bookings are down 3.7 points while Latin America is down 5.9 points. Its United Express bookings were down 2.1 points.

In his usual frank way, Smisek said that while United loves all its customers it loves some more than others, since business/premium travelers produce most of the revenues. 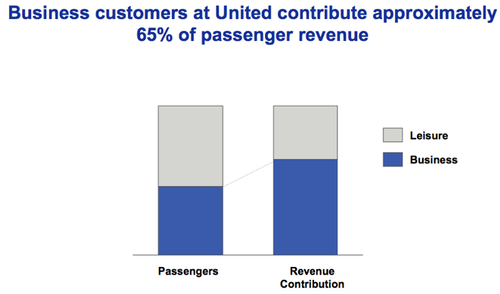 “We will never be the low-cost producer,” Mr Smisek told investors. “We have a global product and a disproportional part of our revenue is higher cost. We have to improve the value experience and profitability no matter what the cost of fuel. We have a network product with a certain service level and and there are ways of offering produces and services that drive higher PRASM. We enjoy higher PRASM because we earn it. We led the industry in pre-tax margin and that was before a penny of the merger synergies."

Legacies moving to stop commoditisation of the airline product

Smisek echoed Mr Bastion in noted that for too long the industry has allowed itself to be commoditised and a key strategy for the future was to end the power of distribution systems to continuing commoditising the product. While they did not say it in so many words, it was a clear shot across the GDS/OTA bow. Indeed, while American would not provide any update on how it is doing in its battle to impose Direct Connect, the rest of the carriers strongly signaled that they are moving in the same direction.

Delta is targeting USD1 billion in additional incremental revenue by 2013 with new products and services such as seat-related products, SkyPriority for highest-value customers and new ancillary products such as hotels, SkyClub passes and WiFi.

Both United and Delta indicated they are working on decommoditising air travel not just through driving more bookings on their own websites but through innovative products and services including the premium experience, seating and space, flexibility in booking, on-board ancillaries and baggage services. Smisek also said that airlines have to find new ways of offering them to passengers. 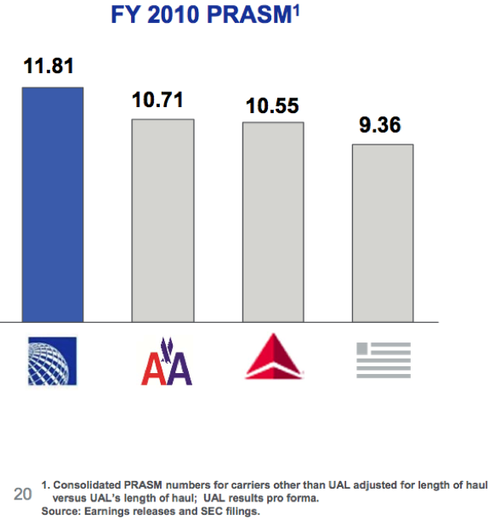 United: Over 35% of Fortune 500 companies are headquartered in its hubs 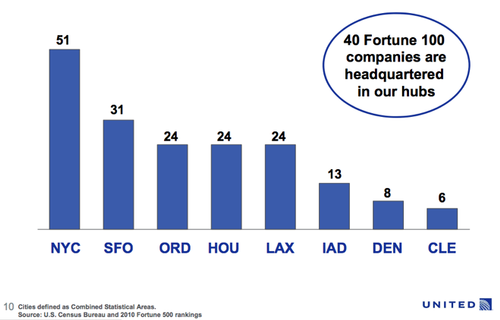 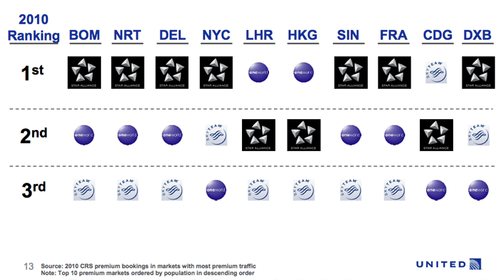 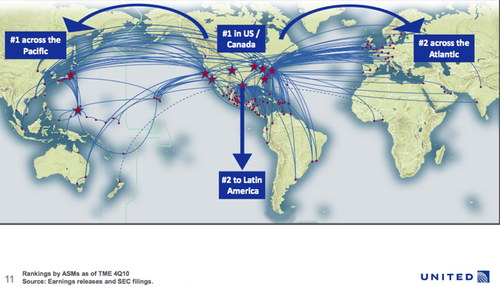 US Airways President Scott Kirby reported that US Airways would reduce fourth quarter capacity by 1-2% from original guidance. “The good news is the capacity discipline remains intact, fuel increases are being passed along successfully in higher fares and revenue,” he said. “When fuel is this volatile you have a natural bias toward cutting capacity because the downside of being wrong is larger than having a little less capacity.”

JetBlue CEO, Dave Barger meanwhile pointed out that the airline was outperforming its guidance, thanks to the fare increases as well as it Caribbean fuel surcharge. 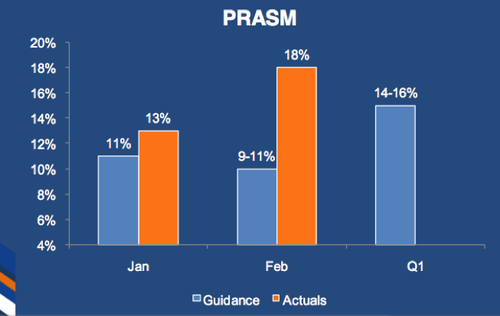 He explained that its A320/Embraer 190 fleet was second only to Alaska in fuel efficiency. 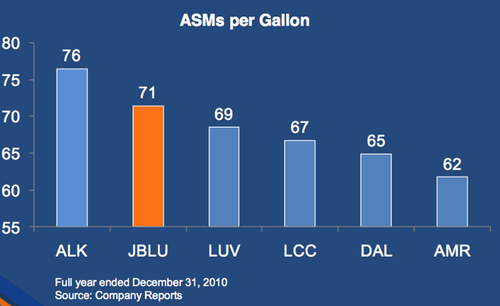 Barger emphasised the role of Boston to the JetBlue network and the networks relevance to business travelers there compared to competitors. 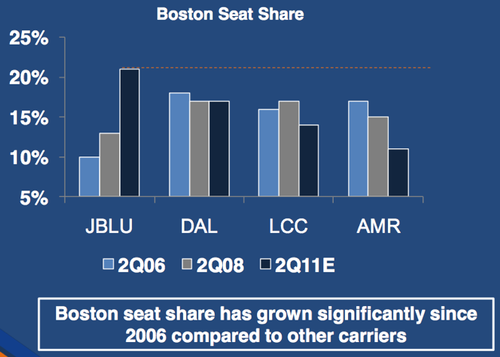 He also emphasised the unit revenue growth in the Caribbean has outpaced the system average, paving the way for increasing opportunities in the region. 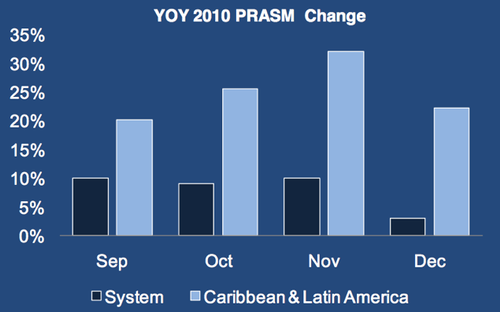 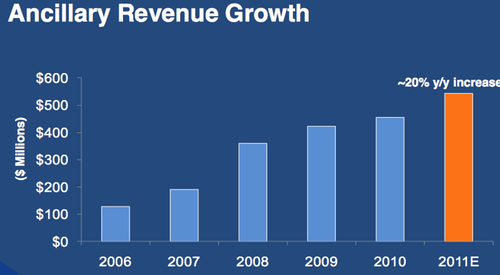 In addition, he pointed out that JetBlue continued to have the lowest CASM ex fuel in the industry at 7.03 cents and expected 2011 to be -1% to up 2% this year. 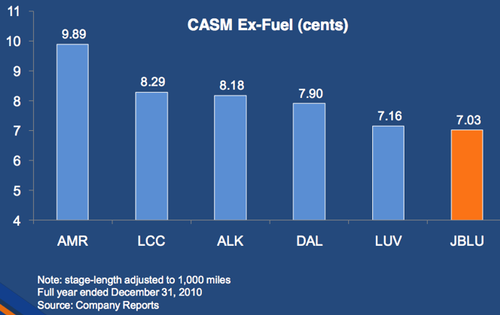