US airlines get trans-Pacific JVs started

Two major trans-Pacific joint ventures commenced on 01-Apr-2011, the first between Continental Holdings and All Nippon Airways and the second between American Airlines and Japan Airlines, which has recently exited bankruptcy. The JVs will mean closer cooperation between the airlines and are enabled by the US-Japan Open Skies agreement and antitrust immunity granted by US and Japanese regulators.

The airlines can align schedules, fares, and terms and conditions for itineraries and fares and schedules for travel to/from certain other points in Asia, Latin America and the Caribbean. Despite the short-term challenges in the Japanese market, these partnerships are part of long-term strategy tied into alliance membership, similar in flavour to the round of trans-Altantic partnerships that were entered into in 2008 and 2009.

Shares in American Airlines were down 1.1% on Friday, while United Continental Airlines shares slipped 0.2%. United, Continental, Delta and American Airlines announced they have raised base fares by USD10 per round trip however as of 01Apr-2011, some low cost carriers had not matched the increase. US carriers raised base fares twice in Jan-2011, three times in Feb-2011 and once in Mar-2011.

The major stock market mover was Skywest USA, which slipped 3.3%. The carrier downwardly revised its 1Q2011 net profit forecast to a loss of USD13-15 million, resulting in a basic and diluted loss per share of USD0.24-0.28 per share. The carrier did not state the reason for its revision. 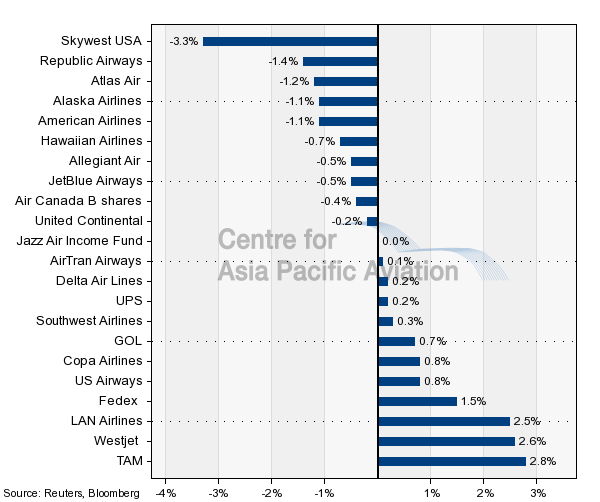