Now that US airlines seem to be enjoying a new cycle of financial stability they are attempting to create sustainability in an area that has historically lacked momentum – shareholder rewards.

The three major global network airlines have all crystallised some form of shareholder returns for the short term as rewarding investors is rising to become a new competitive attribute for airlines. Roughly seven months after American and US Airways closed their merger, the new American has outlined a share buy-back and issued its first dividend since 1980.

All of the new emphasis on rewarding shareholders is made possible by the balance sheet clean-up and de-levering occurring with most US airlines, which is allowing airlines to develop executable cash deployment strategies.

Delta outlined its first shareholder returns package during 2013, when it issued a USD0.06 dividend and outlined a three-year USD500 million share buy-back programme that was actually completed within a year. In May-2014 Delta increased its dividend by 50% and outlined a USD2 billion repurchase programme set for completion by YE2016.

The airline recently estimated that it has returned more than USD750 million to shareholders during 2014, and expects to generate roughly USD3 billion in free cash flow in CY2014.

Delta is stressing responsible deployment of its cash flow to reduce risk across its business, paying down debt and keeping capital expenditures in check. The airline’s adjusted net debt has fallen from USD17 billion in 2009 to USD9.4 billion in CY2013, and it aims to reach a USD5 billion debt level in 2016.

It estimates an annual interest expense of USD350 million when its reaches its USD5 billion debt level target, versus USD750 million in CY2014 and USD1.3 billion in 2009. Its capital expenditure target is USD2 billion to USD3 billion annually during the next five years. 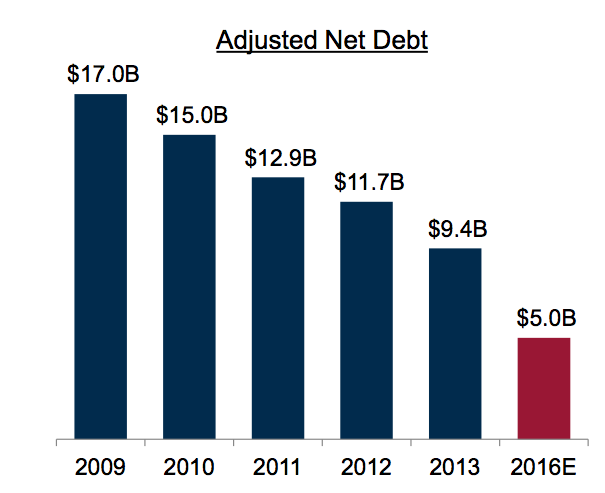 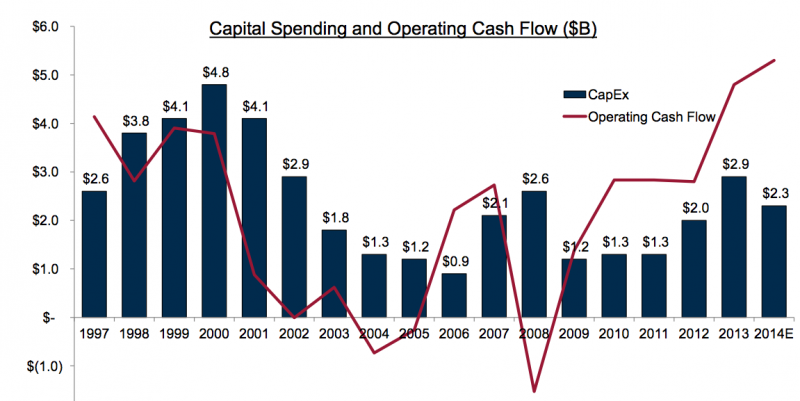 Recently Delta concluded that “historically what has been missing from this industry has been a serial return of capital back to shareholders”, said airline CFO Paul Jacobson. “Yes there were buybacks done, yes there were dividends paid, but really nothing more significant than just a check in the box dividend or a share buyback programme that was really characterised by events”.

Delta is attempting to create more certainty and predictability in shareholder rewards, and at least has a framework for how it intends to deliver on those awards during the next couple of years.

American issues a dividend just months after closing its merger

American Airlines during Aug-2014 paid its shareholders as USD0.10 dividend (slightly higher than Delta) and is undertaking a USD1 billion share repurchase programme scheduled for completion by 31-Dec-2015.

The decision by American to outline a shareholder reward package in the midst of merger integration is interesting. But it also reflects a new reality in the industry of shareholders looking for rewards as airlines are largely recording consistent profitability.

During American’s first earnings discussion after closing the merger the airline fielded questions over how it intended to deploy its roughly USD10 billion cash balance. After tabling its short-term plan for shareholder rewards, American was queried about its thought process over the long term with respect to shareholder returns.

The airline declined to outline specific targets, and perhaps it should be granted some leeway during its merger integration. But airline CEO Doug Parker did declare that the rewards were not a “one-off situation”. Contemplating shareholder returns is “really an indication of how transformed this business is”.

Consolidation is obviously a huge driver in the transformation Mr Parker believes has taken shape, and the American-US Airways merger makes the new American the largest airline in the US domestic market place based on ASM deployment. Data from CAPA and OAG show that for the week of 22-Sep-2014 to 28-Sep-2014 American and US Airways combined represent approximately 24% of the ASMs deployed in the US market. Given its sheer size and the strong demand within the US – its domestic passenger unit revenues increased 8% in 1H2014 – American’s shareholders are going to demand evidence of the business transformation in the form of continuous returns. 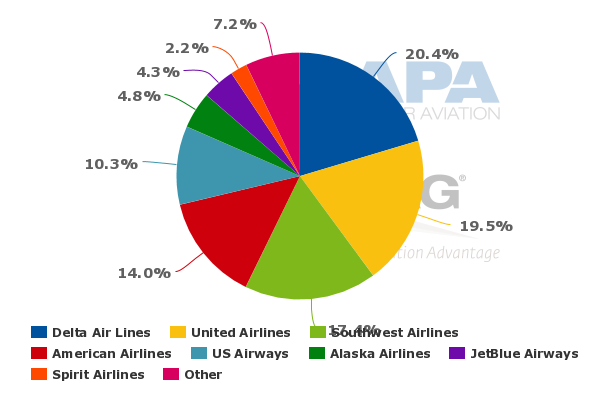 United plans a share buy-back, but has no plans for dividend in the short term

United has also joined its rivals during 2014 in outlining a shareholder reward scheme; but for the moment has no intention of joining American and Delta is issuing a dividend.

United is initiating a USD1 billion share repurchase programme for completion in 2017 after making what deems as progress in improving its capital structure. The amount of the share repurchase was roughly 6% of United’s market capitalisation as mid-Jul-2014.

United’s progress in capital structure improvement includes paying down USD10 billion in debt during the last few years. The airline has little non-aircraft debt due through CY2017 and is forecasting a capital expenditure range similar to Delta for CY2014 to CY2017 of USD2.8 billion to USD3 billion. It also aims to keep its unrestricted liquidity at USD5 billon to USD6 billion. 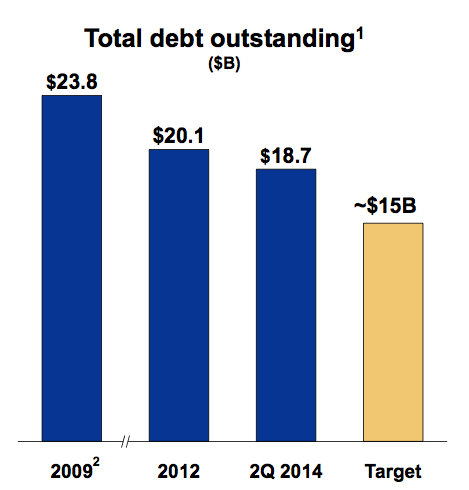 Shareholder demand for even more returns will get louder and stronger

Work by American, Delta and United to define short term shareholder reward schemes demonstrates the attention that shareholders are demanding from airline management teams who constantly stress that the business has been transformed, and that sustainable profitability should become a mainstay in the industry.

Shareholder returns are also rising to become a tool in an airline’s competitive arsenal. Delta was the first major airline in the new era of stability to outline its plans to reward shareholders and the other large network airlines followed suit within a year.

Mr Rainey remarked that the four largest airlines (American, Delta, United and Southwest) returning cash to shareholders speaks volumes about the changes throughout the industry, including the de-risking of the business and sustainability of profits going forward.

The work by all US airlines to de-risk, de-lever and shore up profitability is commendable, but as they all declare, the work is far from over. Institutional investors are becoming increasingly vocal about airline performances, and using their influence in some cases to effect change in executive management teams – evidenced by the departure of long-time JetBlue CEO Dave Barger in Feb-2015 after some investors questioned his leadership due to soft margins and general underperformance.

Even with the recent declarations by US airlines of returning to cash to their shareholders during the next two years, airline owners are now setting their sights on cash returns for the long term, and urging airlines to discuss how they intend to create the framework for sustainable returns.

Their voices are only going to get louder and their demands for even more returns stronger.

This is the first in a two-part series examining US shareholder returns.