All US carriers stocks surged on Thursday (10-Sep-09), following optimistic advice from analysts at JP Morgan stating now is the time to buy airline stocks. As a result, the AMEX Airlines Index (6.7%) rallied, its highest gain since Jan-2009, despite an increase in oil prices (0.9%), to USD71.94. The Dow (+0.8%) rose, although not as substantially. Meanwhile, only three carriers, WestJet, TAM and GOL PERCENTAGES? ended trading down.

According to JP Morgan, US carriers’ cash levels are currently at a size where Chapter 11 bankruptcy filings are unlikely to occur during Winter 2009-10. Furthermore, the analysts forecast demand will “bounce along” until Jan-2010, after which a gradual recovery in the economy in 2010 will lead to increased demand.  In terms of revenues, JP Morgan forecast a 20% decrease in US carrier revenues in Oct-2009, followed by declines of 10% and 12% in Nov-2009 and Dec-2009, respectively. However, the analysts expect revenues to increase 5.5% in 2010.

However, LCCs JetBlue (+2.2%) and AirTran (+0.6%) were downgraded from “overweight” to “neutral”, forecasting the aforementioned legacy carriers will have more success in 2010.

Fellow legacy carrier, Delta Air Lines (+10.5%) also rose, despite Barclays Capital’s widening of its 3Q2009 forecast loss to USD0.25 a share from its previous forecast of USD0.05 a share, due to fuel costs, the global financial downturn and the swine flu outbreak. However, the analysts agreed with JP Morgan’s forecast that the economy will start to recover in 2010, which will allow Delta’s stock’s  to improve next year. Delta ended trading at USD8.10, its highest price in seven months. 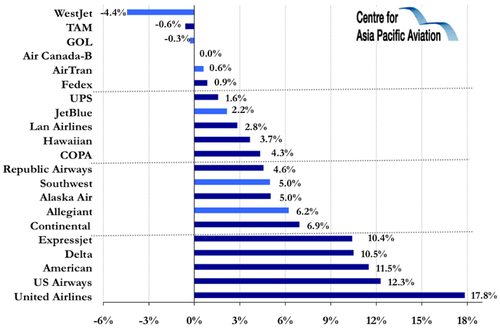