United, Alaska and US Airways lead fall in Americas, Hawaiian and Delta up

Thursday (27-Aug-09) was a poor day on the market for North and South American carriers’ stocks, with the majority down, following IATA’s latest traffic data showing international travel demand has still not recovered, and increasing oil prices (+1.5%), up to USD72.49. As a result, the AMEX Airline Index (-1.5%) fell.

The Dow (+0.4%) meanwhile wavered throughout the day, before ending the day nearly flat.

JetBlue (-2.3%) was also down. The LCC announced earlier in the day plans to increase frequencies from San Francisco to Austin, Boston, Fort Lauderdale, LA/Long Beach and New York from Jan-2010.

Across the border, Air Canada (-2.3%) remained in the doldrums with investors.

Meanwhile, Expressjet (+2%) continued its rise, along with Hawaiian Airlines (+0.5%) and Delta Air Lines (+0.4%) among the few who were up at the end of trading.

In non-listed carrier news, Frontier Airlines announced it expects to emerge from bankruptcy in Sep-2009, after reporting a net profit of USD18 million in Jul-2009. New owner, Republic Airways (+0.1%), ended the day up.

Virgin America meanwhile forecast it could be profitable by the end of 2009, after it reported an improved second quarter net loss of USD15.7 million. 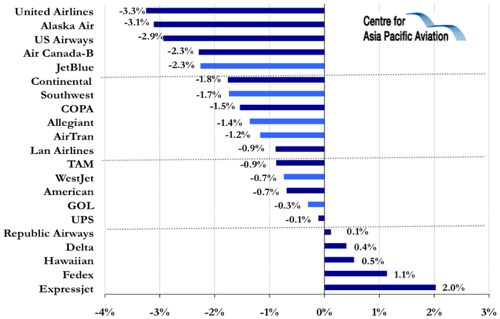