The AMEX Airline Index (+2.7%) rebounded on Wednesday (11-Nov-2009), as the majority of North and South American carriers’ stocks rose. Stocks were assisted by the wider market, with the Dow ending trading up 0.4%. Oil prices also rose slightly, up 0.3%, to USD79.28.

The carrier also during trading unveiled a revamped TrueBlue, its customer loyalty programme. The programme now has no blackout dates, meaning members can book any seat on any flight. The programme’s points are earned based on dollars spent with JetBlue or charged on a member's JetBlue Card from American Express.

In related news, Canadian LCC, WestJet (-0.6%) plans to unveil its new frequent flyer programme at the end of the month, which is set to include a "travel bank", in which consumers can save points.

Republic Airways (+6.5%) rose following news the day prior that it plans to establish a hub in Milwaukee County. The carrier stands to make USD27 million in Wisconsin tax credits from the new hub if it meets job and investment goals. 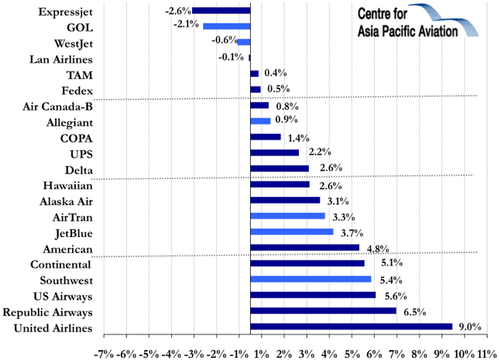