The majority of North and South American carriers’ shares were up on Thursday (15-Apr-2010) on news United Airlines has reportedly entered merger negotiations with Continental Airlines and analyst upgrades. A decline in oil prices (-0.4%), to USD85.51, and a gain in the Dow (+0.2%) also helped airline stocks move higher. The US market gained for a sixth consecutive session, as the industrial sector rose on news manufacturing is improving in a number of regions.

UPS (+5.3%) also rallied after pre-announcing a 37% increase in adjusted diluted earnings per share for 1Q2010. The results were powered by a significant acceleration in the international package and supply chain businesses and improved operating margins across all three segments.

UPS CFO, Kurt Kuehn, stated the carrier expected the first quarter to be “the most challenging of 2010 as the economic recovery gathered steam through the year," However, revenue was "stronger than expected due to international volume gains, increased yields in the US and growth in Forwarding and Logistics".

Alaska Air (+2.0%) also rose after Barclays Capital raised its price target for the carrier from USD51 to USD57, with an ‘Equal-Weight’ rating. The analysts also raised targets on the following carriers:

Meanwhile, ratings of American Airlines (+0.7%) and Delta Air Lines (flat) were both cut: 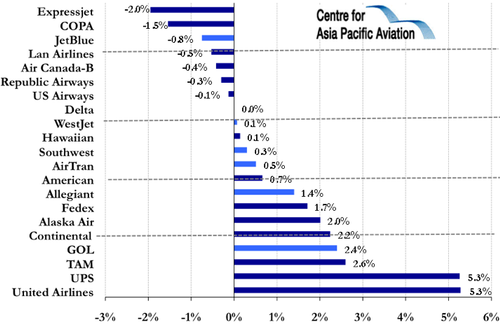