In the wider market, the Dow (+1.7%) gained, led higher by banking and energy stocks, after the Bank of America announced “significant gains” in its number of modified mortgages handled through the US Government’s Home Affordable Modification Program and Barclays reported better than expected results for FY2009.

LAN (-0.2%) and United Airlines (-1.7%) were the only two carriers to witness a decline in share price for the day, after a number of bearish investors placed put options on United’s stocks. According to Forbes, approximately 21,500 puts options were purchased at the March USD15 put price for an average premium of USD1 per contract. Investors presumably expect United’s shares to continue to erode.

In other United Airlines news, Chairman and CEO, Glenn Tilton, stated he is interested in renewing merger talks with Continental, citing investors' reaction to the successful Northwest/Delta merger. Mr Tilton stated in an interview with The Financial Times that “the investor seems to have spoken. The market seems to have suggested that scope and scale in a global business are important”. See related article: Investors like mergers says United Airlines CEO, Glenn Tilton

Meanwhile, Continental Airlines (+1.1%), United Airlines (-1.7%), Delta Air Lines (+1.9%), American Airlines (+3.9%) and Hawaiian Airlines (+2.7%) separately submitted or announced plans to submit applications to the US Department of Transportation to provide services from select US destinations to Tokyo Haneda Airport. The carriers are seeking rights under the Dec-2009 Japan-US open skies agreement, which is anticipated to come into force later this year. See related article: US airlines jump at first opportunity at Tokyo Haneda Airport in 30 years

Other stories in today’s America Airlines Daily include: 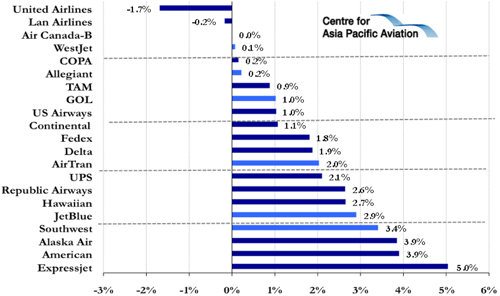