North and South American carriers’ stocks rebounded on Friday (25-Sep-09), following three straight days of losses. Consequently, the AMEX Airline Index (+2.4%) was up, despite a slip in the Dow (-0.4%) and a slight increase in oil prices (+0.2%), to USD66.02. The rise came from an upgrade in ratings for five US carriers.

UBS upgraded United Airlines (+5.3%), Continental Airlines (+4.9%), American Airlines (+3.8%), Alaska Airlines (+3.2%) and US Airways (-0.4%) from “neutral” to “buy” late on Thursday, due to improved outlooks for the carriers’ stocks, a “modest” improvement in unit revenue and demand and lowered risk of bankruptcy. As a result, United led the rise, as UBS stated it believed it was to benefit the most from the economic recovery, while US Airways still ended trading down.

SmarTrend analysts also advised that it remains bullish on these carriers' stocks, forecasting a continuation of a technical uptrend, with all carriers above their 50 and 200-day moving averages as follows:

American Airlines to pay 10.5% yield on its private offering

American Airlines also benefited from its announcement that the pricing of its private offering of USD450 million aggregate principal amount of its 10 1/2% senior secured notes due in 2012. The notes are expected to be secured by the carrier's aircraft, and proceeds from the offering of the notes will be used to refinance the airline's existing USD432 million secured bank term loan facility. The notes will be guaranteed by AMR. Completion of the offering of the notes is subject to customary closing conditions and is expected to occur on 09-Oct-2009.

GOL up on plans to issue new shares

GOL (+3.8%) also ended the day strongly following its announcement of plans last week to issue at least 51.8 million shares on the Bovespa, which would raise approximately USD535 million for the LCC. Investors will be able to reserve shares from 02-Oct-09 to 07-Oct-09, which are expected to commence trading on 13-Oct-09. 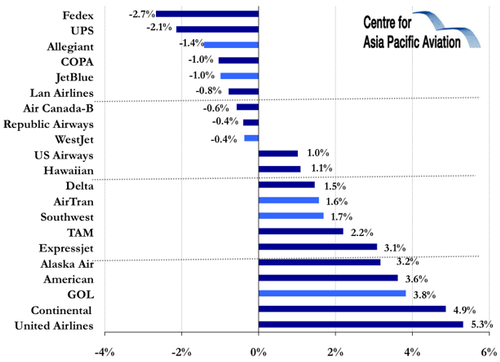