Aer Lingus’ traffic has been on a downward trend for at least the past 18 months. For the first six months of 2011, a period that has been beset with non-recurring events, Aer Lingus carried 4.5 million passengers, a drop of 2.5%. Capacity increased 0.7% in the period, pushing load factor down 3.2%.

The figures reflect CEO Christoph Mueller’s plans to shrink Aer Lingus into sustained profitability, after years of struggles against LCC rival and shareholder Ryanair. Mueller has refocused Aer Lingus on managing for yield, something which proved successful in the most recent financial year. This new focus has seen yields increase by 11% in FY2010 and by 9.0% in 1Q2011. The threat of industrial action by the pilots’ union, IALPA-IMPACT, however, remains a constant threat to scheduled services, and follows lingering, but now resolved, threats with cabin crew, also represented by IMPACT. 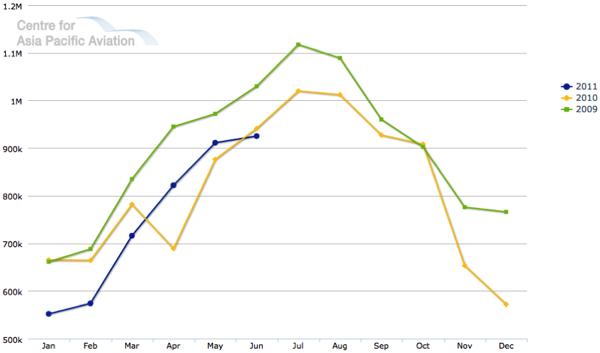 In another negative for Aer Lingus, Ireland’s Minister for Transport Leo Varadkar has stated the government will not sign an order to abolish the EUR3 air travel tax until Aer Lingus and Ryanair confirm their winter schedules from the country. Mr Varadkar stated he “definitely does not want to give the airlines something for nothing”. 01-Jul-2011 had been “pencilled in” as the date for abolishing the tax, he stated, but he has “not been comfortable in advising the Minister for Finance that the responses have been sufficient”, from the airlines.

Most concerning for Aer Lingus are the conditions demanded by the Irish government in return for dropping the tax. Services must be reinstated in order for the tax to be abolished. With question marks still hanging over the strength of the Irish economic recovery, now is not the time for Aer Lingus to resume previously loss-making services.

Ryanair, in marked contrast to its Irish counterpart, reported the strongest growth of the four carriers reviewed by CAPA in the first month of summer. Passenger numbers increased 9% year-on-year to 7.33 million. Load factors were steady at 84%. CEO Michael O’Leary stated in May-2011 that the LCC expects passenger numbers to grow 10% in the seasonally strong six months to Sep-2011, while numbers will fall 4% in the following six (winter) months. The strategy, which would be the first time Ryanair records a seasonal year-on-year fall in traffic - and certainly the first time it has had the explicit intention to do so - is part of plans to restore profitability during the winter. Mr O’Leary has also expressed concern at the impact of the recession, austerity measures and falling consumer confidence on airfares.

Ryanair’s growth trend over the past three years appears almost as the reverse to Aer Lingus’. 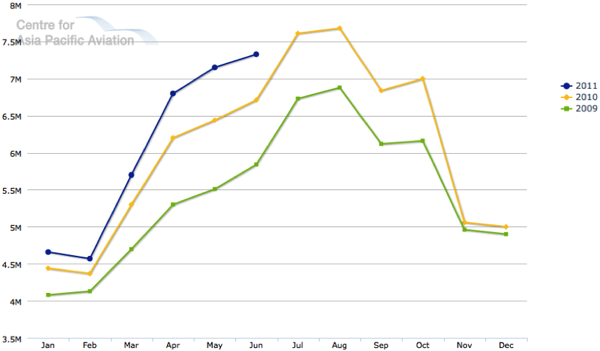 The LCC has far less exposure to the Irish market than does Aer Lingus, so any delay in the Irish government’s travel tax will have a more muted impact on Ryanair’s performance. Both airlines are a similar size in terms of seats offered to/from/within Ireland. The traffic figures would be closer between the two carriers, as Ryanair operates with higher loads. 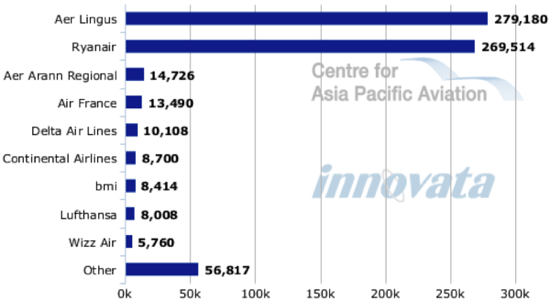 Ryanair, although not a member of IATA, welcomed the industry body’s news in late Jun-2011 that it carried the most international passengers, carrying 71.2 million in 2010. The number provides a good measure as to how large Ryanair has become in Europe. The figure is 62 million more than Aer Lingus, 30 million more than Lufthansa and 10 million more than easyJet and British Airways combined.

easyJet increased passenger numbers by 9.2% in Jun-2011 to 4.95 million. The LCC maintained its industry-leading load factor, which increased 1.1ppts to 88.3%. easyJet’s montly traffic does not fluctuate as much as Ryanair’s season-to-season, with the British LCC maintaining a more stable growth profile around the year. It has also posted higher monthly growth traffic than its Irish rival for the past eight months, with the exception of Jun-2011. 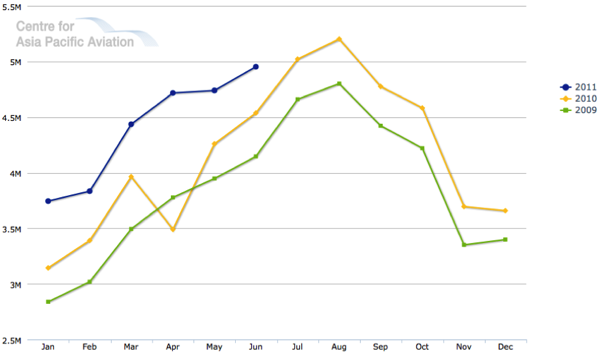 easyJet has warned in recent months that it will be far more ruthless when it comes to underperforming routes, stating it will continue to adjust capacity growth in the face of short-term uncertainties. The airline passed the 200-aircraft mark in May-2011 and noted that capacity growth will be under close watch going forward - an issue which majority shareholder Sir Stelios has repeatedly raised with management.

easyJet will continue its push for higher-yielding corporate passengers as part of plans to become Europe’s “preferred” short-haul carrier. About 20% of easyJet’s passengers are business travellers. The airline, which now seeks to avoid the “LCC” tag, has launched its flexi fares via its website. The fares, which are aimed at the corporate client, were previously only available through the GDS. The Flexi fare provides passengers with unlimited flexibility to change their flight date up to two hours before scheduled departure.

Domestic traffic in the UK continues its "structural decline" as the airports increase charges and the government increases taxes and provides incentives for people to use other modes of transport. In Spain, Iberia’s troubles in the domestic market have become more pronounced as Ryanair expands across its six bases. To better compete against LCCs, Iberia is increasingly using 46%-owned subsidiary Vueling on short-haul sectors to and from Barcelona el Prat and Madrid Barajas, leveraging the LCC's lower cost base. This trend is expected to continue across the region. 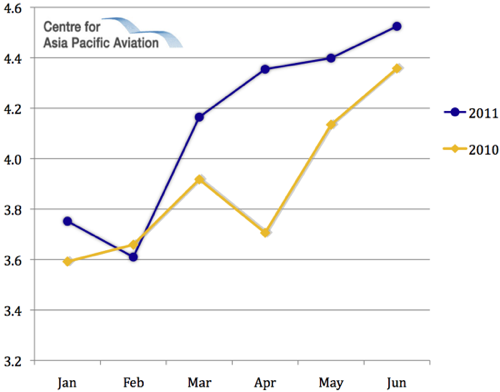 Most of the growth was due to strong premium traffic and trans-Atlantic demand. RPKs in Jun-2011 increased 9.2%, with the strongest growth coming on North American, Latin American and Asian routes. Reflecting the strength of the rebound in business travel relative to leisure, group premium traffic increased 25.2% against a non-premium traffic increase of 6.8% in the period. Part of the strong growth in the group reflects Jun-2010 disruptions caused by strikes at British Airways. British Airways accounts for 70% of RPKs in the group.