If a nation is not a country until it has a local beer and airline, then an extension may be that the carrier needs to fly to London. That is based on the constant theme for Asian carriers – such as Garuda, Philippine Airlines and Vietnam Airlines – opening routes to London and maintaining them despite financial pressures. But this does not apply to China. Chinese airlines have as many seats to Italy as to the UK; more Chinese tourists fly to New Zealand than to the UK. All seven of China's long haul carriers intend to fly to Australia but only four will fly to the UK.

This backwater issue is a problem for UK tourism - and for British Airways. Concurrent with President Xi's visit to the UK, visa restrictions will be loosened for Chinese nationals. But this is not enough; British tourism is hurt by the UK not being a member of the Schengen zone, where Chinese visitors can apply for one visa and visit multiple countries on one trip. The resulting limited Chinese interest in the UK hurts British Airways, which has the smallest presence of major European carriers in China. Finnair for one is bigger, furthering the case for deeper IAG-Finnair ties, or even a takeover. BA has a strong if quiet strategy to grow its China business, but still needs more support.

The UK relaxed visa procedures for Chinese visitors on 21-Oct-2015, concurrent with President Xi's visit to the UK. Although such visa moves are meant to reflect mutual ties, the direct benefits are firmly on the British side: each Chinese visitor to the UK spends on average GBP2,688, with 22 Chinese visitors sustaining one UK job.

Under the latest changes, the standard visa (single entry, valid for six months) will be extended to multiple entries for two years. The cost, GBP85, will remain the same although it is approximately twice the cost of a Schengen visa, which is easier to obtain and permits travel to a far wider area. Previously the multiple entry, longer duration visa cost GBP324. Eventually the UK could follow Canada and the US in making a 10 year multiple entry visa the default and for the standard GBP85 fee; currently a 10 year visa is GBP737. Reports indicate a more liberalised approach will require assessment of economic impact, but this seems contradicted by the UK's own statistics about the value of local spend. British Airways and luxury shops (at which 40% of Chinese visitors reportedly shop) have been lobbying for an easier system to welcome Chinese visitors and their spend, which the UK misses out on. In 2012, two thirds of Chinese visitors to Europe went to France but only 18% went to the UK.

Cost is the not the sole issue. The UK's visa form is 10 pages and requires fingerprinting at one of nine centres, although this could increase to 50. Visa centres could expand beyond the current number of 12.

IAG CEO Willie Walsh has been blunt on the matter. In May-2013 The Guardian quoted Mr Walsh saying: "People need to feel that the UK is actually welcoming. There is a perception in China that the UK doesn't want to see Chinese tourists or business." In May-2015 the Daily Mail quoted him saying the UK's visa policies for Chinese had "failed miserably" and that "the UK is tinkering with changes to a system that is not fit for purpose. What we need is a radical overhaul". In Sep-2015 The Telegraph quoted him remarking: "The Americans know how to attract these Chinese high-spenders...They have introduced a 10 year visa as standard for £100, while the UK’s is six months with the Chinese being fingerprinted every visit."

The UK has been trying to increase Chinese visitation with various initiatives, none involving a sweeping overhaul. in 2014 Chinese nationals could apply for a UK visa at the same time as a Belgium Schengen visa (often seen as more valuable since it grants access to the entire 26-member Schengen zone) but still had to complete different processes. From 01-Jul-2015, the UK and Belgium systems were aligned, meaning only one set of paperwork and a single visit was necessary. This "twin system" visa system aimed at strengthening the appeal of both the UK and Belgium, which does not receive many Chinese visitors but can offer them a Schengen visa to visit elsewhere in Europe. More popular European destinations for Chinese – such as France – have little incentive to issue UK visas at the same time. Bolder steps are needed to address unimpressive visitor figures to the UK.

Chinese tourism to the UK decreased in 2014. There are no geopolitical or health factors to blame

The UK has the unfortunate distinction of posting a decrease in Chinese tourists in 2014 compared to 2013. 185,000 Chinese visited the UK in 2014 compared to 200,000 in 2013, a decrease of 8% or 15,000. Overall in 2014 global tourists to the UK increased 6.1%. Asian visitors did not fare so well. Visit Britain posts individual statistics of eight Northeast/Southeast Asian markets (mainland China, Hong Kong, Japan, Korea, Malaysia, Singapore, Taiwan and Thailand).

Collectively these eight regions sent 1% more visitors to the UK in 2014 than 2013. Mainland China was not the only country to decrease, but it was the largest in both percentage decline and absolute reduction in visitor numbers. 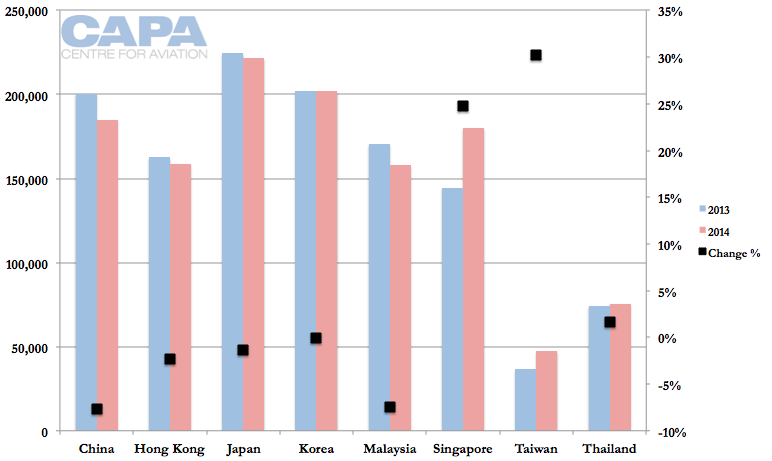 There are some explanations to be found. In Malaysia, which posted the second largest decrease after mainland China, the ringgit has depreciated. Likewise for Japan's yen. But there is seemingly no acceptable excuse for the decrease in mainland Chinese visitors. Their outbound traffic has soared. Where Chinese visitors have stopped travelling within Asia, it is typically due to a geopolitical factor (anti-Chinese protests in Vietnam, political uncertainty in Thailand, sour relations with Japan) or health (MERS in Korea in 2015). None of these traits is found in the UK market. (The lack of public data from other European nations makes comparisons difficult.)

The UK's 200,000 Chinese visitors in 2013 compare to France's 335,961, Italy's 333,705 and Germany's 268,404. 2014 figures are not known to be public. Visit Britain does not supply monthly updates on visitor volume from specific nations, but in Aug-2015 reported that over a rolling 12 months to Jun-2015, there was no change in the volume of Chinese visitors to the UK. Although this unfortunately did not show growth, it also did not show a further contraction. Hong Kong, Singapore and Korea showed increases in the year to Jun-2015 while Japan, Malaysia and Thailand posted decreases.

Another factor could be the US and Canada stealing the show – because of their liberalisation. Both nations now issue 10 year visas to Chinese nationals and have simplified the visa process. Trans-Pacific airline capacity has significantly grown. It can easily be cheaper to travel to North America than the shorter distance to Europe. The VFR market can be larger in North America (thereby potentially helping to reduce accommodation costs) and the sheer size of the market and various destination points provides many travel options. 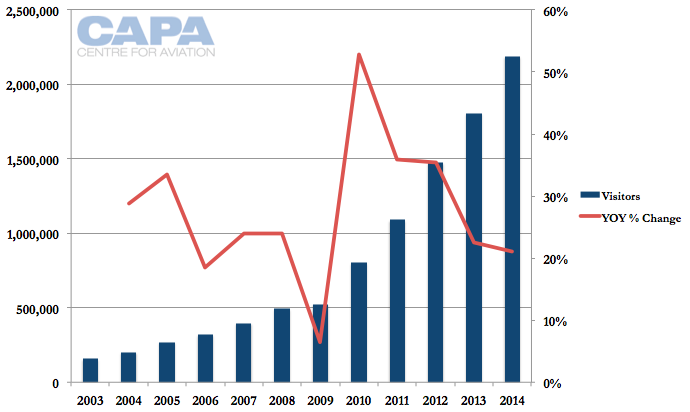 Meanwhile Australia and New Zealand persist as popular leisure destinations. This is reinforced by strong tourism campaigns from those two countries and is made possible through generous air traffic rights, which cannot always be said of Europe (Germany is not expanding traffic rights for China). Besides more Chinese visiting France, Germany and Italy than the UK, more also visit (small) New Zealand.

See related report: Australia is most popular long-haul market for Chinese airlines while USA is the largest 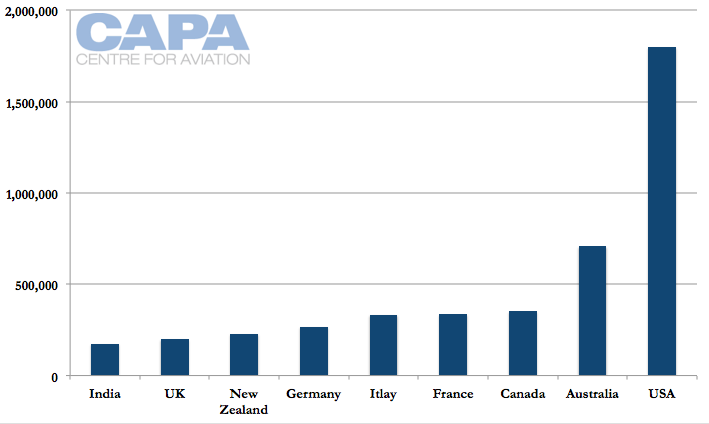 British Airways lags AF-KLM and Lufthansa in China. Finnair is bigger – should IAG buy it?

The limited interest in UK travel hurts its flag carrier. British Airways accounts for only 4% of the China-Western Europe market (available seats) based on schedules for Jul-2016, as of Oct-2015. Air China is the leader with 24% of capacity. The largest European carrier, Lufthansa, has 13% (three times that of BA) and the second largest is Air France with 10%. BA is dwarfed by these individual airlines – and more so by groups.

Lufthansa Group accounts for 18% of the market while AF-KLM is 17%. Only IAG's BA flies to China. IAG's Iberia is expected to commence Asian services, but not to China. The potential of a Lufthansa-Air China JV (the exact parameters to be determined) potentially give them upwards of 43% of the market. 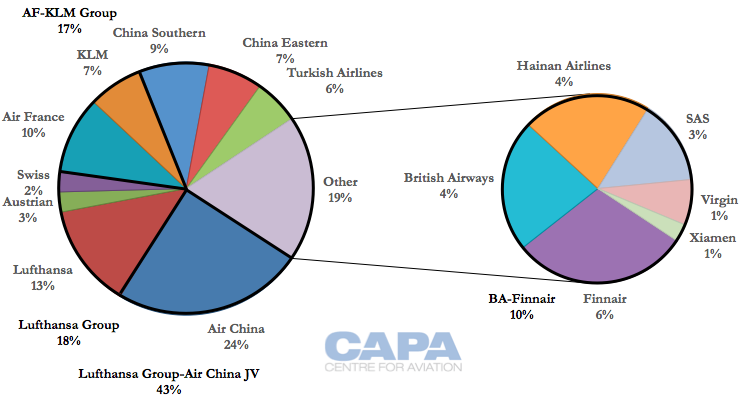 Finnair is larger than BA in China, with a 6% share – almost as much as KLM or China Eastern. Finnair earlier in Oct-2015 announced resumption of service to Guangzhou in 2016, making the southern China city its fifth in mainland China (after Beijing, Shanghai, Chongqing and Xi'an). BA's network still holds at three (Beijing, Shanghai and Chengdu).

There has long been discussion about IAG's interest in Finnair. Both seem to have concluded any potential deal will not occur until Finnair completes its restructuring. IAG's growth remains largely anchored on the trans-Atlantic. Aer Lingus adds to its trans-Atlantic portfolio. Chengdu, Kuala Lumpur and Seoul have been added to BA's Asian network in recent times, and there has been up-gauging elsewhere, but it is still the more profitable trans-Atlantic that receives investments. Finnair has a trans-Atlantic presence, which is incorporated in the IAG/AA led trans-Atlantic JV, but its growth focus is Asia. (Finnair's Japanese capacity is part of the BA-JAL JV.)

On the trans-Atlantic, BA is advantaged by having the closest major hub (London) to North America. That facilitates connecting traffic. Between Europe and Asia, connections over London can be circuitous, but not so with Finnair's Helsinki hub. In addition to the UK making it difficult and expensive to acquire a visa, BA's smaller size in China compared to Lufthansa and even KLM is also partially a reality of BA having lower connecting traffic than those two.

BA and Finnair would jointly have 10% of the China-Western Europe market, the size of Air France but still less than the AF-KLM and Lufthansa groups. But it would be a welcome boost, and there is much potential for them to grow market share, especially if they find a Chinese airline partner. It has been a quest for some years.

Being bold in China is not necessarily commensurate with financial discipline. The challenge of balancing short term shareholder with long term vision

British Airways has a directive to grow its China business. It has not been helped by the UK's visa procedures. The latest moves to boost the UK's appeal to Chinese visitors are welcome but more must be done. However, even if this is (hopefully) accomplished on a suitable time frame, it will not be plain sailing for BA.

IAG is Europe's strongest performing airline group. It consistently receives praise from the financial community for its discipline. But therein lies the challenge: growth in China is not necessarily profitable in the medium term. Frequency growth to existing main destinations (Beijing, Shanghai) has clearer profitability timelines than secondary cities (such as Chengdu). It is the secondary cities that tend to be the growth focus, with airlines driven by a need to position themselves for the long term; if they do not serve the market and endure years of losses, another airline will enter and seize the market, making it difficult to establish a presence once the market becomes profitable.

This long establishment strategy is very much old school airline planning. IAG is mostly new school. Lufthansa and KLM have wider networks of service to secondary Chinese cities. Their groups, however, also face financial challenges. Another China long haul point will not break IAG's back, but it will undo hard won gains made elsewhere in the group.

The challenge is finding not only a balance between short term shareholder returns and a long term strategic vision, but also gambling if a large presence in China with weak or no returns really is necessary for the future. The most acceptable compromise may be an equity partnership.