The ordering boom of 2005-2008 saw airlines order more close to 8,200 aircraft, an aircraft spending spree that has never been equalled in the history of the industry.

As with most ordering cycles, it was tied to economic and passenger growth for airlines, as they approached the peak of the cycle (and even after the cycle had peaked in 2008, some airlines were still ordering strongly), as well as the growth of emerging markets and airline business models, such as the burgeoning LCC sector.

However, the fallout from the global financial crisis cut back years of growth for airlines. In Europe, flight numbers retreated back below 2005 levels.

With the economic cycle swinging back, Airbus and Boeing are looking at improved ordering prospects and higher aircraft output from mid-2010. However, if UBS is to be believed, the manufacturers may be in for more pain, even as they deliver their new aircraft to the market.

Last week, UBS released a report which states that airlines massively over-ordered in the last cycle, particularly for the new generation of twin engine widebodies. UBS believes that the result could be cancellations or deferrals of aircraft, something manufacturers have struggled with over the past two years.

According to the report, the top 100 customers accounted for approximately 70% of the manufacturers’ combined order backlog of approximately 6,800 aircraft. These customers have heavily invested in the A350 and B787 programmes. UBS stated that airlines have over-ordered nearly 800 aircraft, including 275 B787s (of 866 firm orders) and 250 A350s (of 530 firm orders).

Customers that could possibly cancel of defer their orders, according to UBS, are mostly airlines in the fast-growing Middle East and Asian markets; Qatar Airways, Singapore Airlines and Kingfisher Airways. US Airways and Alitalia also make the list.

Approximately 12 months ago, UBS forecast that Boeing would cut B737 production by 30-40%. After maintaining production levels through the economic downturn, Boeing is reportedly considering moving to increase production, with a decision expected in late 2010/early 2011. Airbus has already announced plans to increase A320 output.

Airlines identified as at risk of cancelling or deferring their A320 orders are mostly low cost carriers Wizz Air and Tiger Airways, as well as India’s IndiGo.

In trading on Monday, shares in Boeing were up 2.7%, while EADS, parent of Airbus, saw its shares down 1.3%. 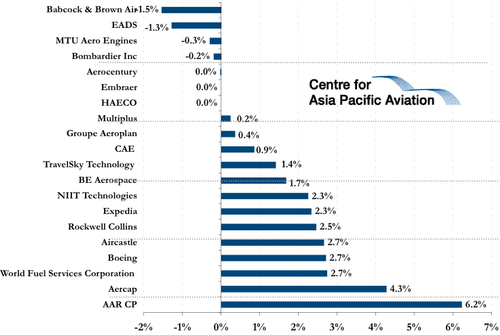