Turkish Airlines (-2.8%) was one of the biggest falls of the day, despite stating during trading it plans to add 20 widebody aircraft to its fleet in 2011. The new aircraft are expected to help the carrier lift turnover to in excess of USD8 billion next year.

Lufthansa (-0.1%) also slipped on news it plans to commence mediated talks with the UFO flight attendants union on 20-Dec-2010, covering their ongoing wages dispute. The parties hope to resolved the dispute by mid-Jan-2011. Lufthansa wants to extend its existing wage freeze until the end of 2011, in return for guarantees not to cut staff until the end of 2012.

Aeroflot to sell stake in Nordavia

Aeroflot (+0.1%) made a marginal gain. It was reported during the day that the carrier plans to sell a 51% stake in Nordavia, its subsidiary that operates in the north-west of Russia. Aeroflot has reportedly approved the agreement under which Taimyr Airlines would acquire a 51% stake in Nordavia, which has failed to fit into Aeroflot's new development strategy. The Aeroflot board reportedly unofficially approved the agreement in Nov-2010 and will officially discuss the sale at the end of Jan-2011. Nordavia operates a fleet of 23 aircraft. 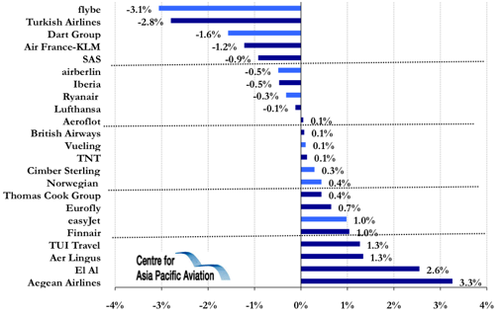