Turkish Airlines improves 2015 margins thanks to lower fuel; growth to accelerate in 2016

Turkish Airlines reported its highest absolute profits for at least a decade in 2015. Both unit revenue and unit cost were lowered by the weakness of TRY versus USD (the airline reports its financial results in USD). With the benefit of lower fuel prices, Turkish managed to reduce CASK somewhat faster than RASK.

However, its 2015 operating margin (operating profit as a percentage of its revenue), while slightly better than in 2014, was still little more than half its 2008 peak level. Moreover, its profit improvement was not evenly spread through the year, instead relying mainly on a strong 3Q result.

Rapid expansion sustained over many years, and exposure to markets with geopolitical and macroeconomic uncertainties, make Turkish Airlines vulnerable to volatility in unit revenue. Capacity growth will accelerate in 2016, when the airline should again benefit from lower fuel prices. However, it will need to continue to focus on further labour productivity improvements and other non-fuel cost efficiencies in order to maintain or improve its margins, without help from low fuel prices.

In 2015 Turkish Airlines' net profit increased by 27% to USD1,069 million, a result that was boosted by currency-related items. The operating profit, which excludes these items, increased at the more modest rate of 6%, to reach USD682 million. Nevertheless, this improved operating result was achieved in spite of a 5% fall in revenue to USD10,522 million and so, the operating margin rose by 0.7ppts to 6.5%. 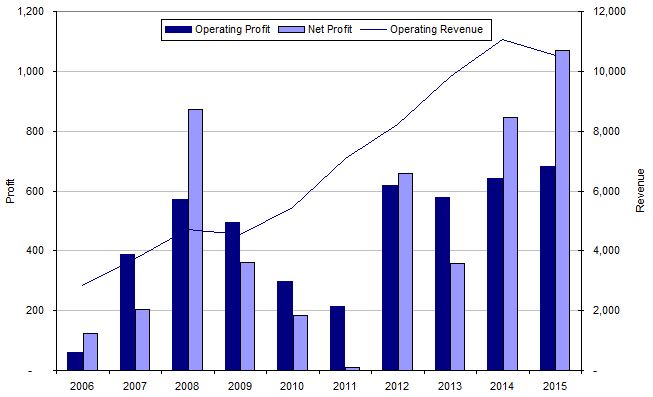 Another year of double digit ASK growth: up 13.6%; yet load factor dips and RASK plunges

Strong capacity growth and currency effects led to a 17.0% fall in traffic revenue per ASK across THY's network. In the domestic market, THY's unit revenue (revenue per ASK, or RASK) fell by 15.4%. This reflected currency impacts and also its strong capacity increase at Istanbul Sabiha Gokcen, the principal base of LCC rival Pegasus Airlines.

Capacity growth in ASKs was highest on routes to North America (+24.1%), thanks to a full year of routes launched during 2014 to Boston and Montreal, and new routes launched to Miami and San Francisco in 2015. North America will remain an important growth area for THY. In South America, THY increased its ASKs by 13.6%. Local currency depreciation versus USD in South America and the strong capacity growth put downward pressure on RASK, which fell by 14.% in the Americas.

Capacity growth was also strong on routes to Asia/Far East (ASKs +14.8%), where Hucend, Taipei and Manila were added as new destinations. This region also experienced heavy falls in RASK (16.2% fall) as a result of local currency depreciation and demand weakness.

THY opened 11 new routes to Europe/CIS, growing its ASKs in the region by 11.5%. This growth rate was dampened by the suspension of Donetsk and Simferopol services as a result of the political situation in Ukraine. Much of the Europe growth came from THY's second Istanbul base at Sabiha Gokcen. Demand weakness and an increase in transfer traffic contributed to a RASK fall of 19.9% in Europe.

In Africa, ASKs were up by 13.2% as new routes to Abuja, Bamako, Maputo, Durban, Antananarivo and Mauritius were offset by route suspensions (Tipoli, Misrata and Benghazi). Increased market capacity from Gulf airlines, demand weakness caused by security and political uncertainties, and currency weakness all weighed on RASK, which fell by 20.3% in Africa. Capacity to the Middle East increased by 13.0% and RASK fell by 9.8% to the region, mainly due to currency. 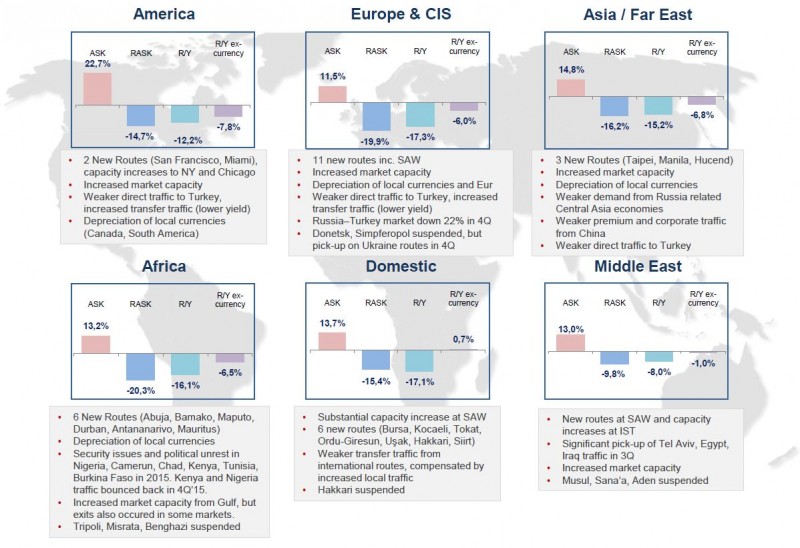 Total revenue fell by 5.0%, in spite of the 13.6% growth in ASKs. This was primarily due to a 4.7% fall in scheduled passenger revenue, which accounted for 88% of the total. Total revenue per ASK fell by 16.4%, with around 10ppts of this decline attributable to movements in currency exchange rates.

Nevertheless, passenger yield excluding currency was lower by 5.2%, a decline explained by THY as due to lower fuel prices, resulting in increased capacity supply.

Turkish has increased its ASKs at an average rate of 18% pa over the last decade, doubling its ASKs every four or five years. This level of capacity growth over a long period inevitably also puts downward pressure on yields.

Total operating costs fell by 5.6% in 2015, which was achieved in spite of capacity growth and was a bigger rate of decline than the fall in revenue. Fuel costs fell by 21.3%, thanks to lower prices, while the 3.3% growth in non-fuel costs was less than the increase in ASKs.

Labour costs, the second largest cost category, fell by 3.2% despite a 10.2% increase in group head count. Given that the majority of personnel are paid in TRY, but that the airline's financial statements are in USD, this cost reduction owes much to the depreciation of TRY versus USD.

Nevertheless, encouragement can also be taken from the fact that labour productivity, measured by ASK per employee, improved by 3.1%. The airline's targets for 2016 imply a further improvement in ASK per employee.

As with revenue, costs reported in USD were also reduced by the depreciation of TRY, which accounted for 31% of costs. Excluding currency impacts, CASK fell by 9.6% and ex fuel CASK actually increased by 2.6%. 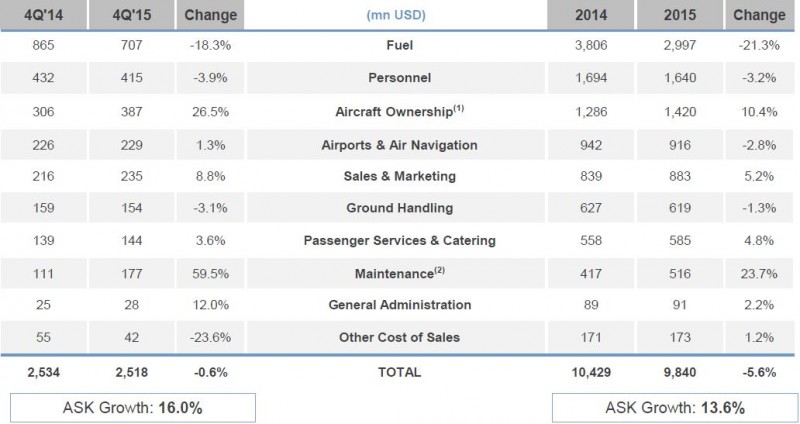 As discussed above, the significant currency movement of 2015, when TRY lost 20% of its value against USD, served to distort the trend in both RASK and CASK for Turkish Airlines. RASK rose a little between 2009 and 2011, before easing back in each of the following years to 2014. Its bigger fall in 2015 (-16.4%) was exacerbated by currency movements, but there was still an underlying decline in RASK excluding currency.

The group's ex fuel CASK had been on a downward path since 2010, although this had flattened out from 2012 to 2014. The plunge in ex fuel CASK 2015 (-17.0%) was caused by TRY weakness, without which it would have increased slightly. Without the fuel price fall in 2015, this underlying increase in ex fuel CASK would not have sat well with THY's currency-adjusted RASK decline.

Fortunately, the decline in total CASK in 2015 outpaced the fall in RASK, driving an increase in the operating margin, but only thanks to lower fuel.

Turkish Airlines – index of operating cost per ASK and revenue per ASK (each indexed to 100 in 2011, based on USD figures) 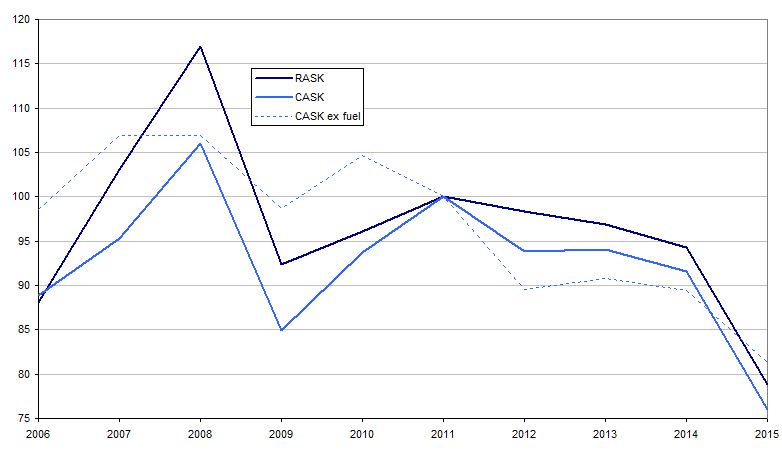 Performance, CASK and RASK movements, were not consistent through the year

Moreover, THY's outperformance of RASK growth versus CASK growth, and the consequent widening of its 2015 margin, was not achieved consistently through the year.

The improvement for the year was thanks to 1Q and, in particular, to 3Q. In 2Q and 4Q, RASK fell more rapidly than CASK.

The year-on-year improvement in its 3Q operating profit was USD145 million, while it improved by USD33 million in 1Q, and the FY2015 improvement was only USD41 million.

Lower fuel prices should help Turkish to drive profit growth in 2016, but there is demand uncertainty

This inconsistency suggests some fragility in THY's markets, especially surrounding demand strength and the consequent robustness (or otherwise) of unit revenue. The airline plans an acceleration of capacity growth in 2016, when ASKs will increase by 21% and the total fleet size will increase by 40, to 339 aircraft.

As CAPA noted in a Jan-2016 analysis of the airline's targets for this year, lower fuel prices and cost control with respect to non-fuel costs should drive further profit growth in 2016. Nevertheless, that report pointed to potential clouds on the horizon:

the key risk is the strength of demand. This is linked to the economic and geopolitical backdrop, which will determine THY's ability to fill its significant new capacity at a yield that allows healthy profits.