Thomas Cook Group's entry into liquidation on 23-Sep-2019 is a sad end for the business that started in 1841, invented the package holiday, and became one of the most enduring brands in the travel industry.

However, together with two other non-UK charter focused airlines (Thomas Cook Airlines Balearics and Thomas Cook Aviation), the group's German airline Condor is still operating its own flights (but cannot board passengers that have booked a package holiday through Thomas Cook Group companies). Condor has applied for a bridging loan guaranteed by the German government.

Headlines are plentiful about the need to repatriate 150,000 UK citizens that would otherwise be stranded on holiday in locations across Europe, North Africa and the Americas. However, the impact on the tour operator, airline and lessor industries and on airports will be felt long after that operation – carried out by the UK Civil Aviation Authority – has been completed.

The situation is fluid and will continue to change, but this report gives CAPA's initial analysis of the possible impact of Thomas Cook Group's liquidation.

According to the CAPA Fleet Database, Thomas Cook Group's fleet as at 23-Sep-2019 comprised 102 aircraft in total.

The Group had the 15th largest fleet among European airline groups, according to the same source.

The UK and Scandinavian fleets, comprising 46 aircraft, suspended operations before the start of their flying schedules on 23-Sep-2019, while the other group airlines continued to operate. Thomas Cook Airlines Scandinavia subsequently posted a statement on its website indicating that it would resume flights on 24-Sep-2019.

CAPA analysis of data from OAG Schedules Analyser shows that Thomas Cook Group is the 14th largest European airline group by scheduled seat capacity in the summer 2019 season, with 1.4% of all seats to/from/within Europe.

Just over half of this seat share is attributable to Condor, which is still operating, while the seat share of the operations that have now ceased is just under 0.7%.

*Based on scheduled seat capacity for the summer 2018 season planned before the start of the season.
Source: CAPA - Centre for Aviation, OAG Schedules Analyser.

Thomas Cook was squeezed by competition, such as TUI Group…

This ranking between TUI and Jet2.com is illustrative of the squeeze felt by Thomas Cook between these two competitors, particularly in the UK.

TUI Group and Thomas Cook Group have much in common at first glance.

In addition, the airline divisions of both groups have undergone a process of increased integration from a disparate history of running separate group airlines.

However, TUI has been financially more successful, with lower levels of debt and a broader base of leisure-related operations, with a higher proportion of up market operations.

Thomas Cook had essentially two businesses – a tour operator (which includes hotels and travel agents) and an airline – whereas TUI has these two plus cruises.

…and by Jet2.com and other LCCs

Jet2.com is different from both of the other two groups, in that it has a UK focus and has grown from a predominantly seat-only low cost airline to a provider of package holidays combining its own tour operator business with the airline.

Focusing on online distribution, Jet2.com has been able to achieve rapid growth with a lower cost base than was built into Thomas Cook's large chain of high street retail outlets.

In the year to Mar-2019, 49% of Jet2.com's airline passengers were also package holiday customers of Jet2 Holidays. This share has been stable for the past three years, but was zero as recently as FY2008 and was only 17% in FY2013.

The rapid expansion of Jet2's package tour business and in the sheer size of the airline, whose passenger numbers more than doubled to 12.8 million over the past three years, has added to the competitive pressure felt by Thomas Cook in the UK, which is its number two market.

In developing seat-only sales as a major part of its business, Thomas Cook Airlines has also felt strong competitive pressure from the other major European LCCs that operate in the UK – most notably Ryanair and easyJet.

Among the three operating under their own code, the biggest is Condor and this is the only one that was due to increase its seat numbers this year.

According to data from OAG, Condor's share of Thomas Cook Group's planned seat capacity for 2019 is 48.4%. 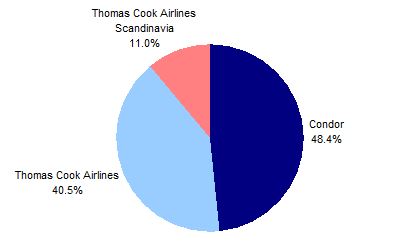 *Seat number planned for the year before the liquidation.
Source: CAPA - Centre for Aviation, OAG.

The data from OAG indicate that the group's total annual seat count was planned to fall by 1.5% in 2019, with the UK airline shrinking by 3.7% and the Scandinavian operator cutting back by 10.1%.

Condor's capacity is scheduled to grow by 2.7% this year.

The UK airline had 225 routes, mainly (but not all) in Europe

Its international airport network outside the UK consisted of 62 airports.

The UK airline's capacity planned for the week of 23-Sep-2019 was mainly focused on short/medium haul.

Europe accounted for almost 80% of its international seats, with North Africa accounting for 7.1%, taking the short/medium haul share to 86.6%. Its long haul regions were North America (7.9% of international seats), Central America (3.1%) and Caribbean (2.3%). 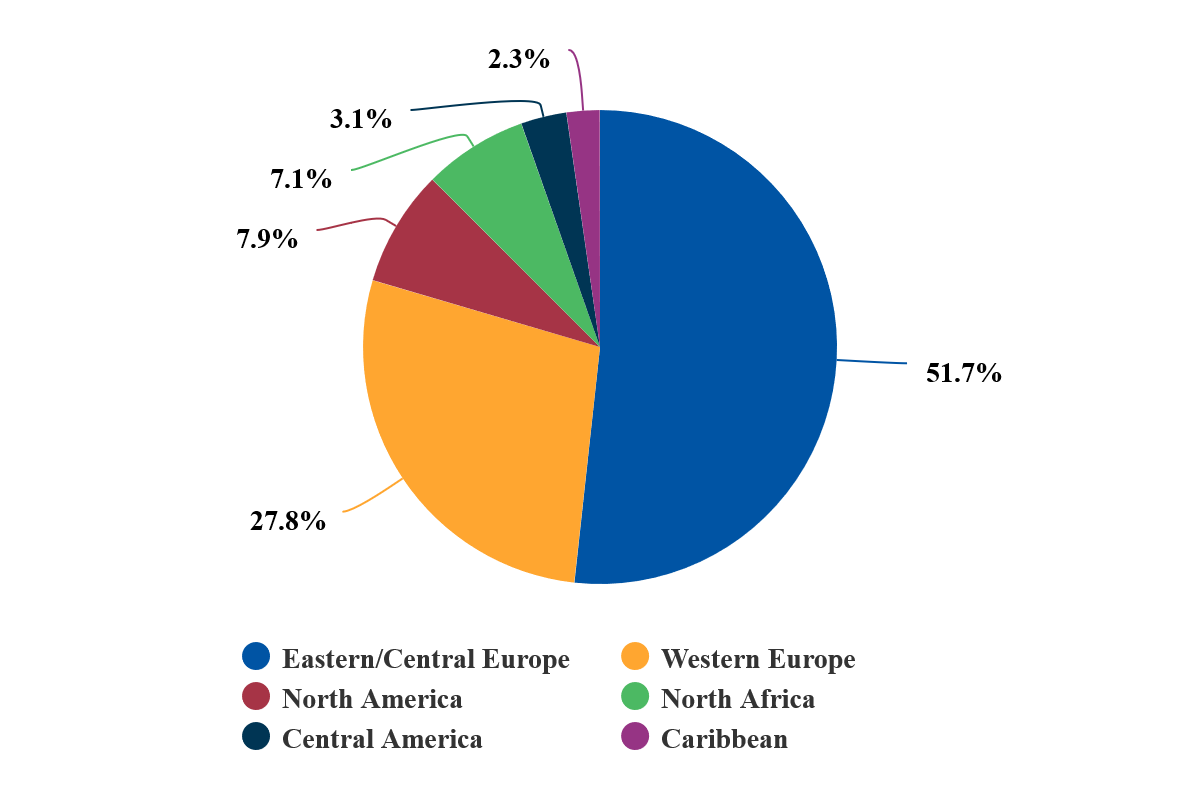 *Seat number planned for the week before the liquidation.
Source: CAPA - Centre for Aviation, OAG.

Spain, Turkey and Greece were the UK airline's three biggest destination countries, followed by the US. Cyprus, Tunisia, Mexico, Egypt, Bulgaria and Cuba were also among its top 10.

Its biggest airports by seats outside the UK were Dalaman and Antalya in Turkey, followed by Palma de Mallorca, Zakinthos, Tenerife-Sur, Orlando International, Enfidha-Hammamet (Tunisia), Menorca, Cancún and Kerkyra Corfu.

Thomas Cook Airlines was the UK's number six airline by scheduled seats for the week of 23-Sep-2019, with a seat share of 3.7%.

The big three of Ryanair, British Airways and easyJet have a clear lead, each with broadly 16% to 17% of international seats. They are followed by Jet2.com and TUI Airways, both keen rivals to Thomas Cook.

Thomas Cook Airlines' biggest UK airport was Manchester, where its seat share in the week of 23-Sep-2019 would have been 10.7% and where it would have ranked as the fourth largest airline. Among its 10 UK airports, this was its second highest share after Cardiff, where its 12.4% share put it in third place.

Thomas Cook Airlines was a top five airline in each of its UK airports and in the top four in six of them.

All of the leading UK airlines will benefit from Thomas Cook's demise.

Jet2.com, Ryanair and easyJet are all top four airlines in seven of Thomas Cook's UK airports, and TUI is top four in six of them (also top five in two others). BA is top four in only two of the 10 airports.

The table below summarises Thomas Cook's seat share in each of its airports, which are shown in the descending order of its capacity at each airport, and also shows the top four airlines in each (data for the week of 23-Sep-2019, source: OAG).

*Shown in order of Thomas Cook's planned seat capacity at each airport before the liquidation.
Source: CAPA - Centre for Aviation, OAG.

The liquidation of Thomas Cook Group could attract bidder interest

The collapse of the Fosun-led rescue deal for Thomas Cook Group and the group's liquidation proceedings has cast considerable uncertainty over the future of the entire business.

It seems unlikely that there will be any interest in buying all, or even most, of the group as a single entity. However, the group's airline activities may attract some interest – if not for them as operating airlines, then possibly in acquiring some part of their capacity through the acquisition of slots and/or aircraft.

Since Condor is still operating and is hopeful of a bridging loan from the German government, it may be the most likely part of the Thomas Cook Group to attract bidders for it as an ongoing entity.

Lufthansa has been quick to rule out an acquisition of the group and has previously backed away from buying Condor, but the liquidation of the parent company could revive its interest.

TUI Group might also be expected to show an interest in Condor and/or other Thomas Cook assets in Germany.

In the UK, TUI, easyJet, Ryanair, Jet2.com and British Airways might all be expected to be looking for opportunities to acquire at least some slots, if not aircraft capacity, as a result of Thomas Cook's demise.

However, the group fleet had an average age of 20 years at 23-Sep-2019 and may not be very appealing to prospective bidders. Moreover, according to the CAPA Fleet Database, only 11 of the group's 102 aircraft were owned by Thomas Cook Group companies at 23-Sep2019.

In the UK, the parent company and the airline are in liquidation, but the receivers will be open to bids for any assets that can be converted into cash. As noted, the majority of the group's aircraft are leased, but aircraft were still the biggest tangible asset on the balance sheet at the last reported balance sheet date.

The 91 leased aircraft in the Thomas Cook Group fleet are spread among a total of 31 lessors. The CAPA Fleet Database lists 11 leased aircraft owned by Altavair and 10 owned by Aviation Capital Group, but no more than seven owned by any other single lessor company.

The chart below shows the number of aircraft in the Thomas Cook Group fleet owned by each lessor and the group airline that operates them (note that operators that ceased operations on 23-Sep-2019 are shown in shades of red/pink, while shades of blue denote those whose flights were not interrupted). 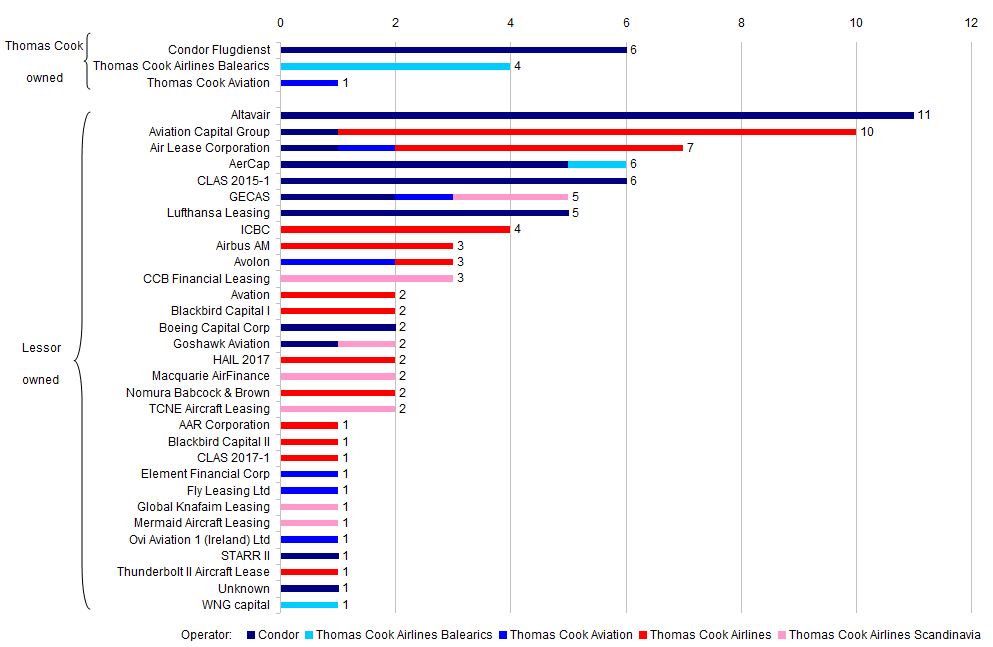 With 1.4% of Europe seats in summer 2019, the group is bigger than Monarch Airlines but smaller than Air Berlin Group, both of which went bankrupt in 2017.

However, half of the group's capacity is still operating under Condor in Germany, which limits the degree of market consolidation that could take place through the exit of capacity.

In pure airline terms, easyJet, Ryanair, Jet2.com, BA and TUI Airways should benefit in the UK.

In Germany, where Condor is still flying (with its own AOC), the situation may depend in the near term on Condor's ability to achieve a loan from its government. In the long term, Lufthansa Group seems likely to benefit in one way or another, as may LCCs operating in Germany, such as easyJet in particular.

Whatever happens, and there are considerable uncertainties, the travel industry is saddened by the loss of one of its oldest brands. Nevertheless, there is clear demand for the underlying products and services that Thomas Cook provided and others will likely find a more efficient way of satisfying that demand.