Skymark Airlines has made more A380 announcements sure to shake up the Japanese market. Its A380s will feature a record-low 394-seats, comprising only business and premium economy classes, and will fly to London.

Skymark Airlines President and 49% owner Shinichi Nishikubo, who stated “there’s no competition in the business-class segment”, said he expects annual sales of around JPY15 billion (USD180 million) for an operating income of around JPY2.2 billion (USD26 million) and a profit within 12 months on the proposed Tokyo-London A380 service, where Skymark will compete against incumbent majors British Airways, Virgin Atlantic, ANA and JAL. Leveraging his lower cost base, Mr Nishikubo will price business-class fare on the route for about JPY300,000, compared with about JPY700,000 offered by Japanese rivals.

Despite being described as a major “gamble” by analysts earlier in the week, Skymark gained 4.7% to JPY888 yesterday.

Also in Asia, Tiger (+2.7%) and AirAsia (+2.1%) gained. Tiger Airways received good news as the board of Thai Airways approved the establishment of Thai Tiger, but insisted on a change in ownership structure. Thai will take a 49.9% stake, employees of Thai Tiger will take a 1.1% stake, with 10% held by Ryan Asia Limited and 39% by Tiger Airways. Thai will have four board members, Tiger two and Ryan Asia one.

US Department of Transport (DoT) has reportedly requested more information from Virgin Blue and Delta Air Lines over their proposed trans-Pacific JV. Requested information includes their latest passenger and fares data to “substantiate their assessment that market conditions have stabilised”. DoT made an initial tentative decision to deny the application in Sep-2010. Virgin Blue shares declined 2.2% yesterday.

Among other losers, Vueling (-3.2%) posted the sharpest fall, mirroring moves in wider European markets as concerns grew that debt problems might spill over to other troubled countries, particularly as Portugal and Spain. 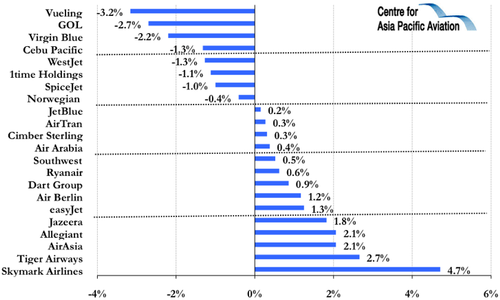