The Big 3 US airlines work to bolster their sagging valuations; the investor base is still sceptical

In 2015 US airlines posted a collective profit of approximately USD19 billion, continued to de-risk their balance sheets, and generated approximately USD10 billion in free cash flow. Additionally, most of those companies expanded their return on invested capital and increased shareholder returns.

Management of the large three US airlines has tirelessly stressed the transformation that has occurred in the industry during the last few years. But the message has fallen on deaf ears with investors. The valuation of those companies has endured pressure during the last year as investors seek to understand the relationship between increasing capacity and falling passenger unit revenues.

For now, it seems that the all airlines can do is to continue to stress what those companies deem as fundamental shifts in the business. In the meantime, airline undervaluation could remain a major issue until investors are fully convinced about the durability of the US airline industry.

Delta trades at a discount to high-quality industrials, despite better metrics

During the last two to three years Delta has consistently stressed to investors not to compare the company with other airlines, but instead to track its financial performance against other high-quality industrial companies.

The airline achieved one of its important goals in early 2016 when the ratings agency Moody’s deemed Delta to be investment grade. Its net debt at YE2015 was USD6.7 billion, and the airline has a stated debt target of USD4 billion by 2010. Among its large global network airline rivals, American and United, Delta has the highest market capitalisation and P/E ratio.

Market capitalisation and P/E ratios for the Big 3 US airlines, as of 10-Mar-2016

Delta has recently stated that it is managing a 20%-plus annual return on invested capital, and free cash flow between USD4 billion and USD5 billion. The company believes that its ROIC, free cash flow and growth in earnings per share place it in the top 10% of S&P Industrials, yet in fact it still trades at a sizeable discount to those companies. 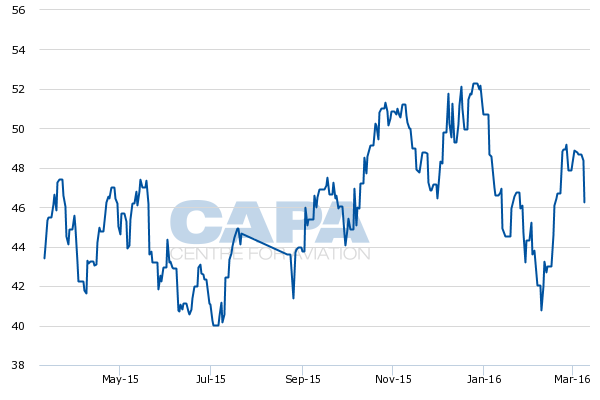 Much of the stock price pressure experienced by Delta and many other US airlines stems from falling passenger unit revenue (PRASM) in 2015, which is continuing at least through 1H2016. Although airlines are recording record profits largely driven by significantly lower fuel prices, softness in pricing has been a challenge, particularly in the US domestic market. Some airlines have chosen to steer investors away from a singular focus on PRASM, and instead to take into account margin expansion and top-line earnings growth. Air Canada has gone so far as eliminating quarterly guidance for capacity, yield and unit revenue.

Unlike some airlines, Delta is addressing investor concern about PRASM head-on. Recently the company president Ed Bastian, who will be elevated to CEO in May-2016, stated that the metric is the single most important one that “we have in the business”, and Delta is working to regain positive PRASM. The company has previously stated its intent to start reaching a positive performance in the metric during 2H2015.

Delta’s capacity is falling to flat to 2% growth in 2016, compared with 3% growth in 2015. The company is stressing that its action on capacity, along with the easing of F/X headwinds that also pressured PRASM during 2015, should help it to lift its unit revenue results.

Outlining the fundamental shifts in the US airline industry, Mr Bastian stated that cumulative profits were USD5.3 billion in 1999, but free cash flow was negative USD1.6 billion. By contrast, profits in 2015 reached USD15 billion while free cash flow was USD10.7 billion.

The American Airlines CEO, Doug Parker, also recently struck a similar tone when talking about the US airline industry’s transformation. He compared profitability in 2005 with 2015, when oil prices per barrel for Brent Crude were USD55 and USD54 respectively. The industry lost USD28 billion in 2005, versus the USD19 billion profit in 2015. Mr Parker concluded that investors had not yet taken the leap of faith to believing the US airline industry is fundamentally different.

American’s stock peaked at USD55.76 in Apr-2015 and fell to USD35.55 in Feb-2016, before inching back up to USD41.65 in early Mar-2016. One feature unique to American, according to Mr Parker, was that during 2015 investors avoided the company due to the looming and complex passenger systems cutover that the airline successfully executed late in the year. Although the cutover was arguably flawless, Mr Parker said that “no one came back to the stock”. 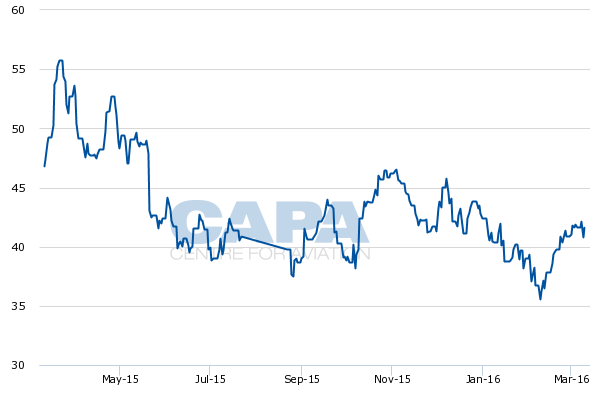 Although American has paid off much of its high-interest debt, its leverage ratios are higher than Delta's and American's. Data from the Wall Street Journal show that American’s long-term debt to equity at YE2015 was 328.71, compared with 115.99 at United and 62.36 for Delta. American is opting to access capital markets at lower interest rates for aircraft financing, and also to keep its cash balances higher. American believes that it is more prudent to exploit lower interest rates and keep a higher cash balance, to offset the fact that it has fewer aircraft as collateral.

At the beginning of 2016 Mr Parker was queried about the disconnect between valuations and airline performance. He remarked that there is a distinct connection between fuel prices and fares, and the industry is going through a time when salaries after pay cuts are being restored. There could be some investor discomfort in oil prices falling and wages increasing, but Mr Parker stressed that the airline business is “starting to act like a real industry”.

American’s CEO concluded that he has never seen a bigger disconnect between financial performance and valuations, but saying, “in some sense, that’s good”, noting that American would use excess cash to buy back shares at the lower valuation.

Shareholders press United to expand buybacks, given the trading price

United, which underwent a CEO shake-up in 2015 and is now facing a challenge to board leadership, understandably talks less about its valuation challenge. Its shares peaked at USD70 in Apr-2015 and have fallen to USD56.34 as of early Mar-2016. United has been less vocal about a return to positive passenger unit revenue and has urged investors to give the same weight to margins and earnings as PRASM. 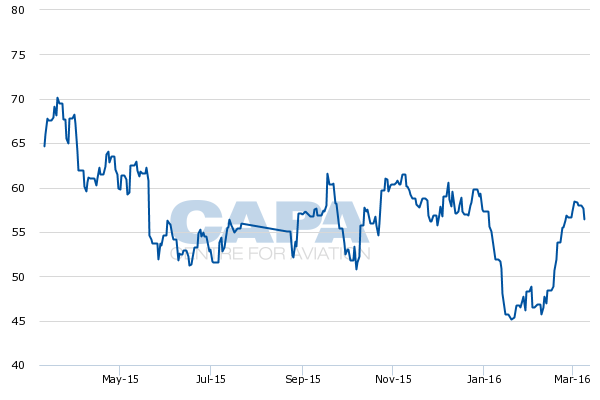 Much of United’s message to shareholders rests on allocating capital sensibly to investment in the business, to strengthen its balance sheet and to improve shareholder returns. For now, those rewards are in the form of a USD3 billion share repurchase, which is being accelerated in 1Q2016 with a buyback of USD1.5 billion. During 2015 the airline spent USD1.2 billion in share repurchases. At the beginning of 2016 some shareholders were pressing for larger returns, given United’s trading price and the cash flows it should generate in 2016. At that time, the message from management was that more clarity would follow in the ensuing months.

Building up investor confidence is an evolution, not a revolution

Delta seems more determined in raising its valuation while American, which continues to press the case of genuine industry transformation, seems poised to continue buying back shares at what it considers to be an unrealistically low valuation. United may continue to be pressured to expand its shareholder rewards, after a rocky 2015 and a weaker unit revenue environment for 1H2016.

Although airlines are frustrated with the lack of recognition from investors, the reality is that there is no frame of reference to indicate that the current performance can be sustained. The cyclical nature of the airline industry has created historical boom and bust cycles that have generally sent investors fleeing. Building up investor confidence in a real industry transformation will take a grant of time and patience from the airline management teams.