Thanks to a clever and disciplined strategy, Bangkok Airways has been the most profitable airline in Thailand in 2015 and by some measures is also the most profitable in Southeast Asia. Bangkok Airways has generated a significantly higher profit than Thai AirAsia so far this year despite its smaller size while the other four publicly traded airlines or affiliates in Thailand have all been unprofitable – Thai Airways, Nok Air, Thai AirAsia X and NokScoot.

Bangkok Airways also reported the largest profit among Thai carriers in 2013 and 2014. Its outlook for 2016 is bright as its codeshare partners continue to expand in the Bangkok market, providing Bangkok Airways more high yielding short haul traffic.

LCC competition continues to intensify in Thailand, resulting in overcapacity and pressuring yields. But Bangkok Airways is relatively immune to the irrational competition at the bottom end of the market because it focuses heavily on traffic originating outside Southeast Asia and has a large and growing operation at the resort island of Samui, where it owns an airport that is not served by any LCCs.

This is the first in a series of reports on Bangkok Airways and the Thai market. This report focuses on the financial performance of Bangkok Airways compared to other Thai carriers in 3Q2015 and the first nine months of 2015.

The second report in this series will look at Bangkok Airways' expansion plans for 2016, including fleet growth, new routes and new codeshare partners.

Thai Airways, Nok, Thai AirAsia X and NokScoot were in the red in 3Q2015

Long haul low cost start-up NokScoot had a negative 127% margin on a very low revenue base. A margin figure for the other long haul LCC start up in Thailand, Thai AirAsia X, is not available as its shareholders did not disclose a revenue figure but it incurred an average loss of THB1882 (USD53.43) per passenger in 3Q2015.

Bangkok Airways is on track to report record profits for the full year 2015, raising its total three year group operating profit figure to about USD250 million for the 2013 to 2015 period. The three year profit figure for its airline segment should approach USD400 million. This gives Bangkok Airways the third largest operating profit in the Southeast Asian airline sector over the last three years but the highest margin.

Thai Airways and Nok both had small operating losses for the first three quarters of 2015 while Thai AirAsia had an operating profit of THB1955 million (USD58 million).

Thai AirAsia X and NokScoot have incurred larges losses due to regulatory restrictions blocking their planned expansion in Japan and South Korea.

All Thai carriers have been unable to expand in Japan and South Korea since ICAO raised concerns with Thailand’s DCA in early 2015. But Thai Airways has not been impacted as it was not planning any expansion in these markets while Thai AirAsia, Nok and Bangkok Airways have not been impacted as they are only short haul carriers.

Domestic market conditions in Thailand have been challenging

In Thailand the second and third quarters are typically much weaker than the first and fourth quarters. But intensifying competition, particularly in the domestic market, impacted market conditions in the last two quarters. Demand in late 3Q2015 was also impacted by the 17-Aug-2015 bombing in Bangkok.

In its 3Q2015 results statement, Nok said the domestic market was impacted by “fierce competition from over supply during low season and sluggish economic growth”. As CAPA has previously highlighted, Thai Lion Air particularly pursued rapid and aggressive expansion in the Thai domestic market.

Thai Lion has quickly expanded since its late 2013 launch and now accounts for over 20% of domestic seat capacity in Thailand. The Lion Group affiliate does not provide financial figures as it is privately owned but Thai Lion has stated it is not yet profitable and aims to reach break-even three years after its launch.

Its relatively large and growing international operation has enabled Thai AirAsia to improve yields over the last year despite the pressure on yields in the domestic market. Thai AirAsia’s RASK was up 4% in 3Q2015 while Nok’s RASK was down 11% in the quarter.

Conditions in Thailand’s international market have been more favourable

Thai AirAsia has a particularly strong network in China, which has enabled it to participate in the rapid growth of the Thailand-China market. Visitor numbers from China have nearly doubled so far in 2015, more than offsetting the decline from 2014 when Thailand’s tourism sector was impacted by political instability.

Thailand reported a 24% increase in total visitor numbers in 3Q2015 and a 28% increase for the first three quarters of 2015. For the full year Thailand is expected to attract a record 28 million visitors, which represents growth of 12% compared to 2014.

In Oct-2015, visitor numbers were up by only 1%, due to the higher base from Oct-2014 and the Aug-2015 bombings in Bangkok. All Thai carriers reported that bookings quickly recovered after the bombings but there was some impact on visitor numbers from some source markets in September and October. 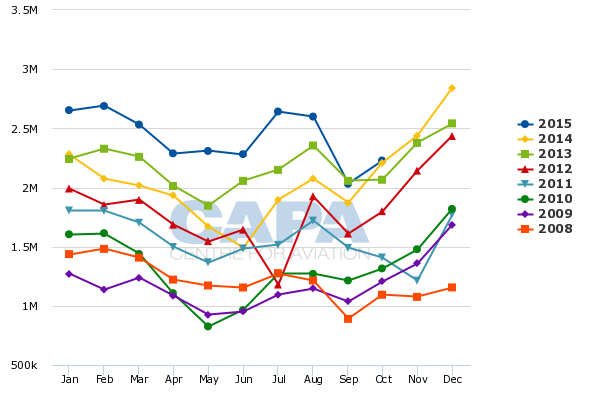 Source: CAPA – Centre for Aviation and Thailand’s Ministry of Tourism

Bangkok Airways has benefitted from the recovery and surge in visitor numbers over the last year as it relies mainly on passengers originating in markets outside its own area of operation – which includes Southeast Asia, South Asia and Hong Kong. Between 70% and 80% of Bangkok Airways passengers are from other regions, depending on the time of year.

About 30% of Bangkok Airways passengers fly on tickets sold by its airline partners through interlines and codeshares.

Another 40% to 50% of its passengers come from outside the region but buy separate tickets which are issued by Bangkok Airways.

Bangkok Airways has a large domestic operation, which accounted for 974,000 passengers or 74% of its total traffic in 3Q2015. But its exposure to the intensifying LCC competition in the domestic market is relatively limited as it focuses on flying passengers around Thailand that are visiting from other regions. About 40% of Bangkok Airways domestic capacity is also allocated to Samui, where there are no services from LCCs.

In theory international passengers arriving in Bangkok can buy tickets on LCCs to domestic and regional international destinations. But all of Thailand’s LCCs now operate from Bangkok Don Mueang while Bangkok Airways operates from Bangkok Suvarnabhumi, which is served by all foreign full service carriers as well as Thai Airways. This gives Bangkok Airways a competitive advantage as travelling between airports in Bangkok is inconvenient.

Suvarnabhumi is currently served by about 90 foreign carriers. Bangkok Airways currently codeshares with 20 of these carriers and has interlines with most of the others.

Foreign airlines have expanded at Suvarnabhumi in 2015 as Thailand’s tourism sector has recovered. Bangkok Airways stated in its 3Q2015 results presentation that its codeshare partners has grown seat capacity by 24% in 2015 at Bangkok, Kuala Lumpur and Singapore.

Bangkok Airways is projecting a further 14% increase in seat capacity by its partners at these three gateways in 1Q2016. While its main gateway is Suvarnabhumi, Bangkok Airways also codeshares with several of its partners from Kuala Lumpur and Singapore to Samui.

Gulf carriers in particular have expanded rapidly in Bangkok. Emirates and Qatar both recently up-gauged more Bangkok flights from 777s to A380s with Emirates deploying its new 615-seat A380 to Bangkok from 1-Dec-2015.

Bangkok Airways codeshares with Emirates, Etihad and Qatar Airways. The three carriers combined have more than doubled capacity in the Bangkok market over the last four years, according to CAPA and OAG data. Middle Eastern carriers overall have overtaken European carriers in recent years as Bangkok Airways’ largest group of partners.

Bangkok Airways also has inevitably benefitted from the restructuring of Thai Airways’ long haul operation as it has led to market share gains for some of its partners. Thai Airways has been increasing its focus on regional connections as part of a new commercial strategy but the focus is on connections within its own network – and to a lesser extent with existing Star Alliance partners – rather than with potential new partners.

Bangkok Airways is well positioned to further grow interline and codeshare traffic, which in turn should give it the yields to remain profitable even if competition in Thailand continues to intensify. Bangkok Airways is already the most profitable Thai carrier despite having by far the lowest average load factors.

While there is room to improve load factors, Bangkok Airways' load factors will remain below industry norms as it designs its schedules to maximise connections with partners, which typically results in relatively full flights in one direction but relatively empty in the other direction. There are also strong seasonal fluctuations in the feed coming from its partners, making it difficult to sustain a high year round load factor.

But Bangkok Airways has the yields – and a low enough cost base – to post high profit margins despite the low load factors. Bangkok Airways’ ability to post profits over the last three years is impressive as it has come in the face of intensifying LCC competition in Southeast Asia’s short haul market and very challenging conditions in the Thai market, particularly in 2014.

The carrier’s track record of profitability was highlighted by the judging panel for the CAPA 2015 Asia Pacific Aviation Awards for Excellence in selecting Bangkok Airways as the Asia Pacific Regional Airline of the year. The judging panel also highlighted Bangkok Airways’ innovative partnership strategy, which has enabled the carrier to differentiate itself in a short haul market dominated by LCCs and grow profitably.

CAPA noted that over the last year Bangkok Airways has become the largest foreign airline in Myanmar while maintaining its status as the second largest foreign carrier in Cambodia and Laos, which gives its partners unrivalled access to key and growing secondary markets in Southeast Asia.

Over the last year Bangkok Airways’ stock price has increased 4%, a modest figure but an impressive showing given the difficult market conditions and the relative performance of its peers. Over the past year the stock price of Nok Air has tumbled by 47% and Thai Airways by 48% while Thai AirAsia parent Asia Aviation is up by only 1%.

Despite its IPO and recent success Bangkok Airways remains a relatively unknown airline and maintains a very low profile.

It has quietly emerged as the best performer in Thailand’s dynamic airline sector and it is well positioned to maintain this distinction.

In the second part in this series of analysis reports CAPA will look at Bangkok Airways’ expansion plans for 2016, including fleet growth, new routes and new codeshare partners.