The key dynamic to watch in the Australian airline market during the last few months of 2020 is the growth of domestic capacity as more state borders reopen. Although progress has been made to remove interstate restrictions, the pace is still uneven, and in some cases has even reversed as restrictions are resumed.

Every month CAPA examines the key trends and developments in the Australasian region as part of the CAPA Live event. The Nov-2020 update focused mainly on the Australian domestic market, since this sector is where most of the movement is occurring. However, there have also been some interesting signals on the more distant prospect of international resumption.

Aside from state borders, one very interesting development in the domestic market is the ambitious effort by Regional Express Holdings (Rex) to launch jet operations on Australia’s east coast trunk routes.

Some of Australia’s major interstate flows have already resumed, and a big development occurred when New South Wales announced it will open its border to Victoria from 23-Nov-2020. This will spur the recovery of the Sydney-Melbourne route, which was previously one of the top domestic flows in the world.

The chart below shows Australia’s domestic capacity climbing as airlines add flights back, with a steeper uptick beginning in late November. 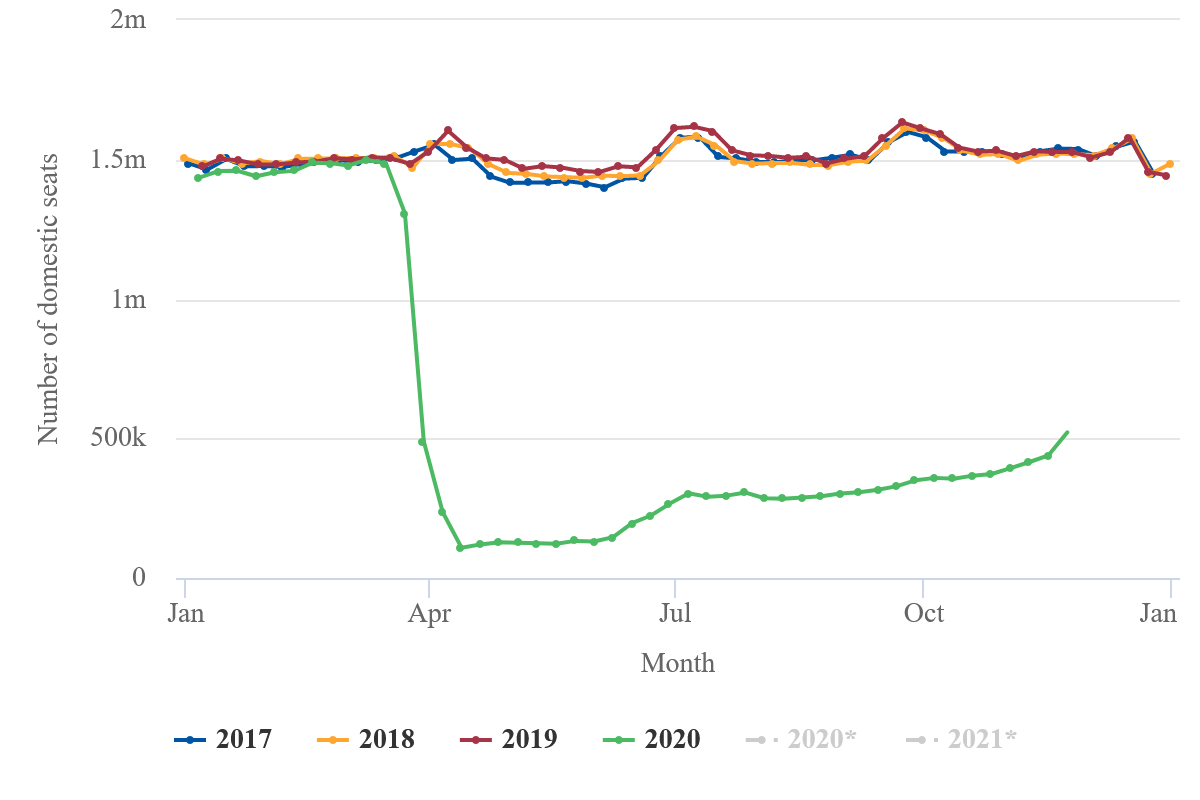 ….but others slower to reopen, and Adelaide restrictions return

There are still some important domestic flows that remain restricted, however.

For example, Queensland and Western Australia are still imposing quarantine for travellers from the greater Sydney area. Airlines have been highly critical of these state governments, saying that the continued block on Sydney is illogical and is holding back domestic recovery.

More optimistic signs emerged when all the states and territories – aside from Western Australia – committed to a framework for national reopening of borders by Christmas.

But then an unwelcome surge in COVID-19 cases in Adelaide in recent days has resulted in some states reimposing quarantine restrictions for travellers from Adelaide or South Australia. This continues the two steps forward, one step back nature of the travel recovery.

The state border openings that have occurred have produced shifts in the chart below, which shows the top 10 routes in the Australian market, as of 16-Nov-2020.

When CAPA looked at this in the October CAPA Live event, almost all of the top 10 were routes within state boundaries, due to the domestic state border closures. The top route at that time was Queensland's Cairns-Brisbane. Now, an interstate route, Sydney-Adelaide, holds the top spot, and three others have also moved up the list.

Prolonged travel restrictions for Adelaide would drive routes to this city down the list. And the resumption of Sydney-Melbourne later this month will boost this route from 18th place to probably taking the lead again. 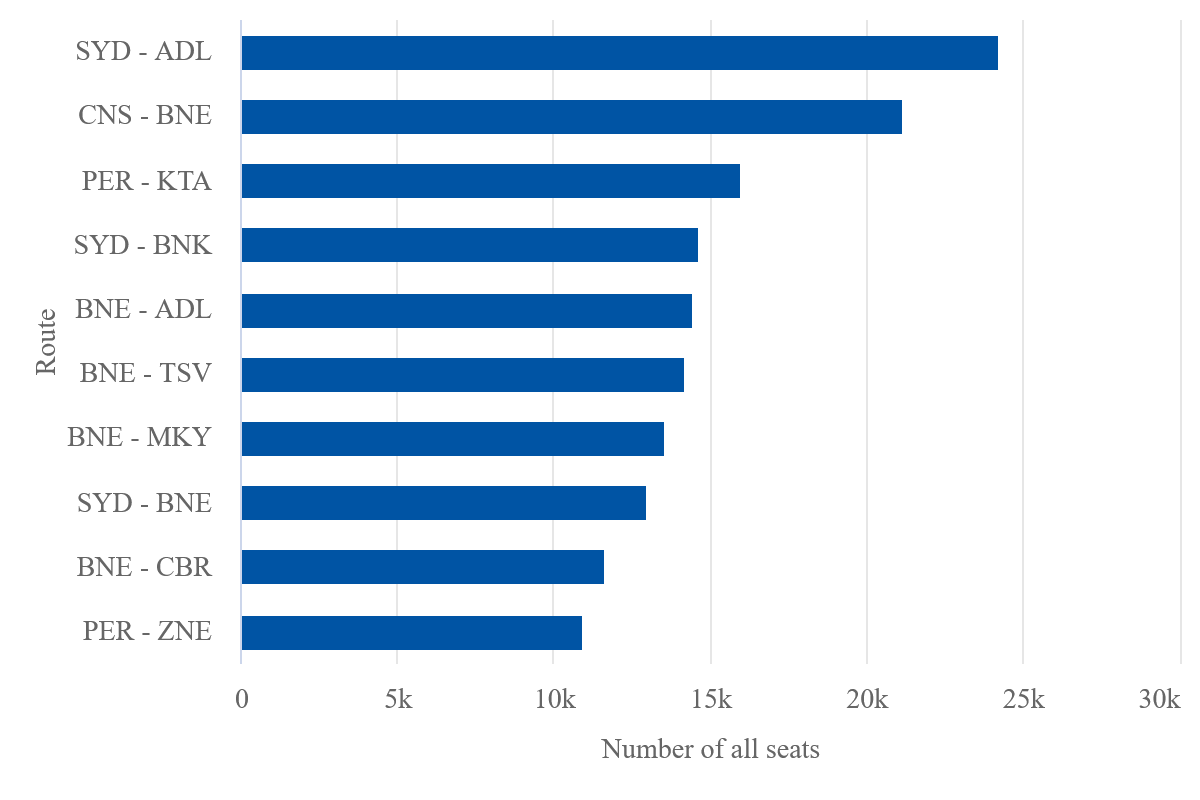 Now, a closer look at the individual airlines in the Australian market.

The opening of the New South Wales-Victoria market is a particularly major step for Qantas. It plans to operate more than a hundred weekly return flights between these states from 23-Nov-2020, versus just 10 at the moment. The massive increase in this market will be enough to bump the airline’s nationwide tally from 30% of pre-COVID-19 levels to 40%.

With Virgin Australia cutting back its operations, Qantas estimates its group domestic market share will lift from 60% before COVID-19 to approximately 70% after the pandemic.

This slide shows how the market is divided at the moment. 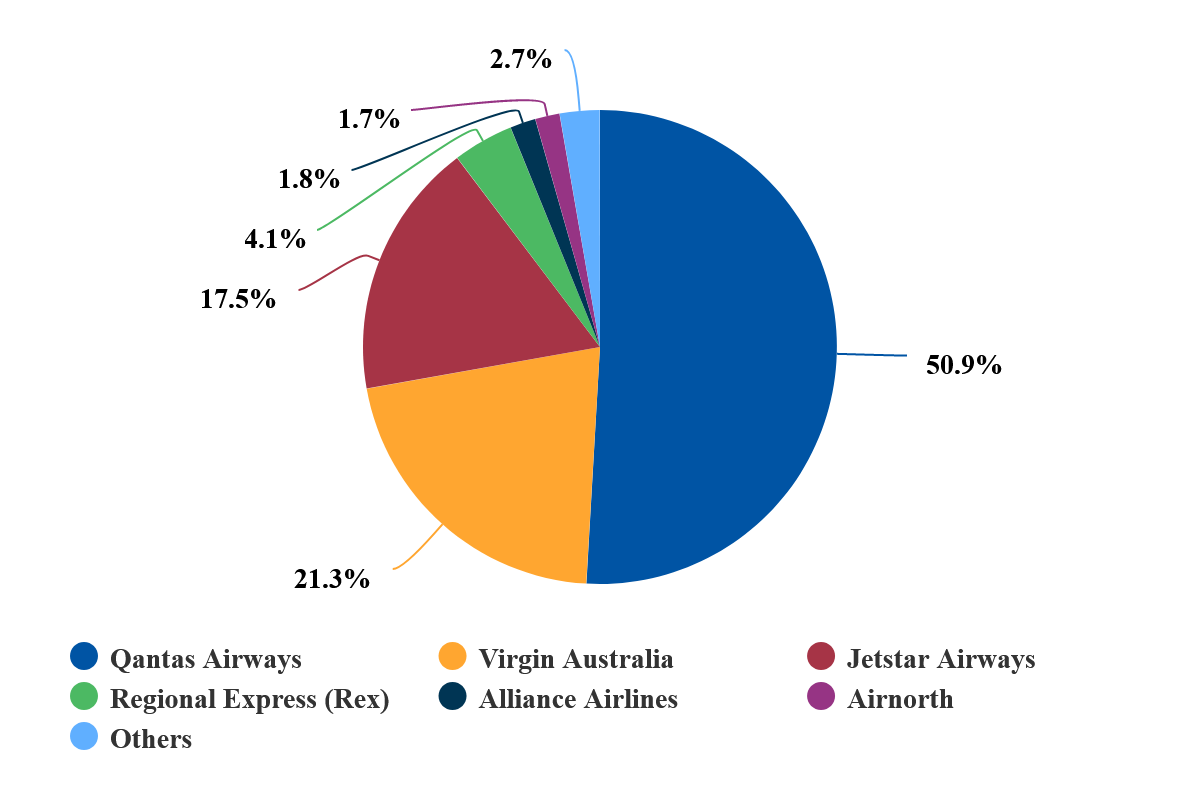 Reciprocal trans-Tasman opening would be another big boost for Qantas

Qantas has also given more signals about how it sees international prospects.

The airline still has a pessimistic outlook regarding European and U.S. flights, which are not expected to resume at any significant level until at least late 2021. Qantas CEO Alan Joyce has said that this would require a COVID-19 vaccine becoming widely available.

Closer to home though, the prospects are a bit brighter. Some Australian states have opened their borders to New Zealanders for quarantine-free travel, although this arrangement is not yet reciprocal.

Qantas has launched some flights in this market already, and it will significantly boost services when the New Zealand government does eventually match the Australian move.

However, such a step appears unlikely before the end of 2020. There is hope that it could occur in the first quarter of 2021, but then again, similar expectations have been dashed before, and airlines will be cautious until something is officially announced.

Travel bubbles could lead to return of some Asia-Pacific routes

Beyond that, the next steps for international travel are likely to be so-called travel bubbles with certain Asian or Pacific Island markets.

Qantas is watching these potential developments with great interest. Travel bubbles will be based on which markets are making the best progress on controlling the pandemic, rather than those with the highest demand.

Qantas noted recently that this could mean flights to destinations that were not even on its pre-COVID-19 network. For example, places like Korea or Taiwan could be leading international destinations for Qantas early next year.

There will also be strong prospects for some routes that were very important to Qantas before the pandemic – Singapore, for example, has opened its borders to travellers from Australia, and could be one of the first to have a reciprocal bubble if the Australian government also eases restrictions.

Mr. Joyce predicts that the airline’s international market share will also increase post-COVID-19 as overseas airlines could take a conservative approach to restoring flights to Australia.

As for Virgin Australia, the chart below shows how its domestic capacity is gradually trending up from a low base.

Like Qantas, Virgin will also substantially increase its domestic flights when the New South Wales–Victoria border reopens. Virgin plans to operate four daily return services between Sydney and Melbourne from 23-Nov-2020, and then progressively ramp up further before the Christmas period.

The airline also intends to accelerate the resumption of Melbourne-Newcastle flights, with four weekly flights due to begin 23-Nov-2020 instead of 15-Dec-2020. And Virgin plans to increase frequencies on the Melbourne-Canberra route in anticipation of the Australian Capital Territory reopening to Victoria. 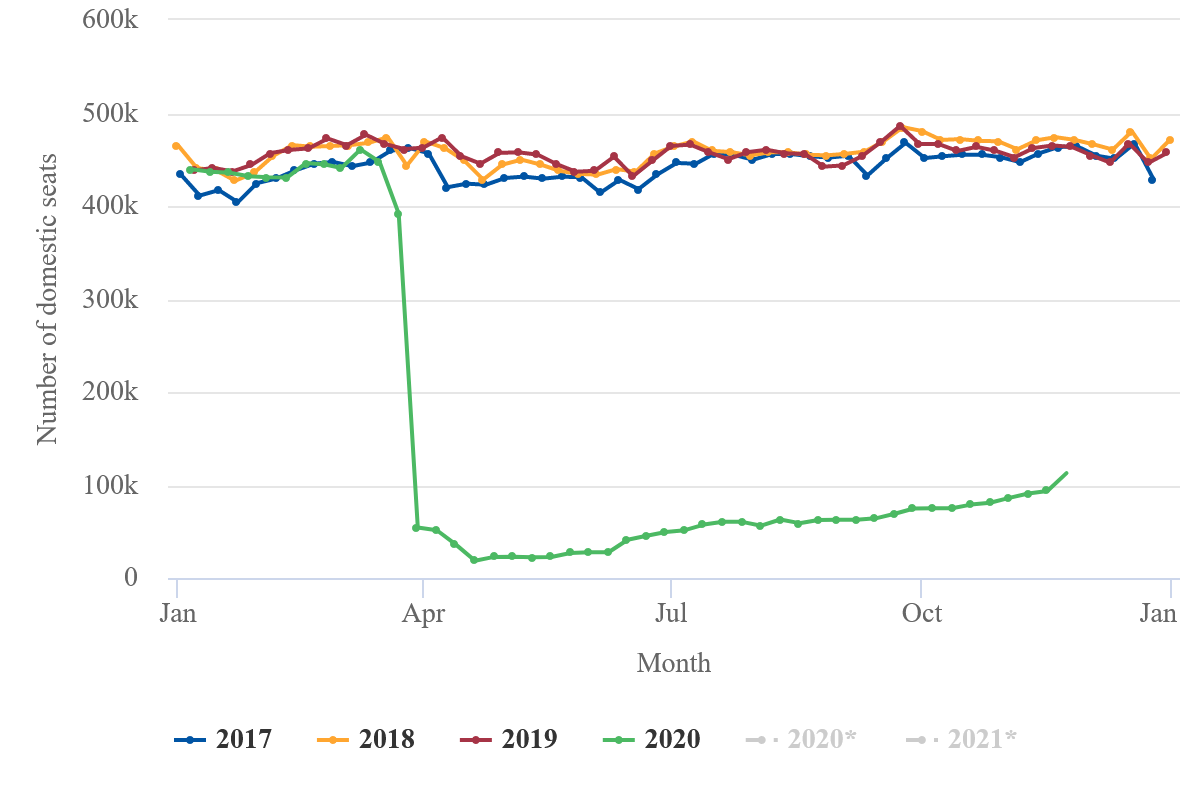 Meanwhile, Virgin Australia is continuing to work through its restructuring following its acquisition by Bain Capital. Effctive 18-Nov-2020 it re-emerges with industry veteran, and former Jetstar CEO Jayne Hrdlicka as CEO, in place of the previous CEO, Paul Scurrah.

More details have been revealed about what Virgin’s network and fleet will look like after the restructuring. The airline intends to reduce its Boeing 737 fleet to 56 – about 30 less than before the pandemic. Virgin has previously said it will cut its widebody fleet, leaving its domestic and international short haul flights to be operated by its narrowbodies.

According to Ms Hrdlicka on 18-Nov-2020, the re-emerged Virgin Australia will "compete in its mid-market heartland for guests who want a more premium experience at an affordable and competitive price. While Virgin Australia will serve all segments of the market, it will build its proposition around its long-standing and most loyal guests, which include price conscious corporate travellers, small to medium businesses, premium leisure travellers and holidaymakers", and will seek "to retain a domestic market share of roughly one third."

Virgin’s first scheduled international flights are likely to be to New Zealand. However, it does not plan to resume these routes until quarantine-free travel is allowed in both directions.

Another important player in the Australian market is looking to grow its fleet. Rex has provided more details about its ambitions to introduce narrowbody jets to compete on domestic trunk routes.

The airline has previously announced that it has leased six 737-800s to start serving the major east coast “triangle” trunk routes from Mar-2021. However, the airline intends eventually to build up to a fleet of 30-40 narrowbody jets, or possibly even more, said Rex Deputy Chairman John Sharp at the November CAPA Live event.

Rex wants to grow its jet fleet “gradually and constantly,” said Executive Chairman Lim Kim Hai during the same event. After the first six aircraft, Rex is aiming to add another 737 every 4-6 weeks from about Jul-2021 onwards, if market conditions are favourable, Mr. Lim said.

The airline currently operates turboprop aircraft on regional routes, so the addition of narrowbody jets is a significant move.

Preparations to start jet operations are “very advanced”, Mr. Lim said. The first of the leased 737s has already been delivered, and training is under way. A proving flight has been booked with the Civil Aviation Safety Authority for 2-Dec-2020. Approval from the regulator is expected soon after that, said Mr. Lim.

The initial three aircraft will be used to launch a Sydney-Melbourne route, and Rex will start with nine daily return flights in this market. Flights to Brisbane will be added with the next two deliveries. Rex intends eventually to serve all of the state capitals and major cities, Mr. Lim said.

The six aircraft leased so far were formerly operated by Virgin Australia. Mr. Sharp indicated that Rex will continue to tap into the surplus Virgin 737s for its future growth needs. He noted that there is not a lot of competition to lease these aircraft, which are owned by multiple lessors.

Rex will offer a business class product on the jets, Mr. Lim confirmed. The regional airline already has lounges at three of the major airports, and these could be expanded.

Although Rex will essentially offer a full-service product, pricing will be at LCC levels, Mr. Lim said. He states that Rex will operate with far lower costs than Qantas or Virgin Australia. The undoubtedly low lease prices will assist in this regard.

"A perfect time to start a new airline"

The jet services will probably get 15-20% of their feed from the existing Rex regional flights, Mr. Lim said. He estimates that 80% of the backbone infrastructure required is already in place with the regional services, so only 20% more will have to be added for the expanded services.

A combination of low interest rates, cheap aircraft, workforce availability, unused airport capacity (slots), and the weakened condition of the incumbents, have all created a unique opportunity for expansion into new markets, the Rex leaders said.

A year ago the launch of a domestic service would have been a “mission impossible”, said Mr. Sharp. But due to the conditions created by the COVID-19 crisis, now is "the perfect time to start a new airline".

In the absence of international markets, Australian airlines are reliant on the domestic market to a greater degree than ever before. But they are essentially at the mercy of the state governments and their differing approaches to travel restrictions. A more standardised approach by the states would undoubtedly be useful – but this goal remains elusive.

While important progress has been made on some interstate routes, the recent Adelaide restrictions show that traffic flows can still be cut off at any time if COVID-19 cases surge. This complicates all aspects of airline planning – the airlines are making network decisions based on where they are allowed to operate, rather than where demand is strongest.

The competitive landscape is also undergoing significant change. Although Ms Hrdlicka intends to pursue a one third market share, Virgin Australia is becoming smaller, while many of its discarded 737s could be put back into service by Rex.

Meanwhile, Qantas, which celebrated its 100th anniversary on 18-Nov-2020, will be regarding with relish the reopening of borders in order to unleash its market strength.