Spirit Airlines’ top priorities for 2016 are: improving its dismal operations after regularly underperforming the industry, and engendering a more positive relationship with its customers. The results so far are relative. Its on-time performance and customer complaint ratios have improved, yet Spirit's ranking remains near the bottom among airlines whose operational metrics are tracked by the US government. Nevertheless, Spirit is pleased with its progress so far.

Spirit acknowledges its operational performance will never rise to the level of some of the top performers in the US; but it believes that the progress it has made during the country’s busy summer high season will continue into autumn 2016, and the improvement will bolster its ULCC model over the long term.

Spirit’s unit revenue performance during the past year has shown that the ULCC model is not immune from the industry yield pressure that has stubbornly hovered over the US domestic revenue environment during that time. While the market place does remain competitive, Spirit is starting to see encouraging signs of capacity restraint among higher-cost airlines.

Spirit makes progress in operations, but still settles at the bottom of US airline rankings

Soon after replacing former Spirit CEO Ben Baladanza at the start of 2016, the company’s new CEO Robert Fornaro remarked that one area of focus for the airline was an improvement in operations, particularly in an environment where higher-cost airlines could price match due to lower fuel prices. He concluded that as other airlines lowered their fares to match Spirit’s price points, a corresponding improvement in Spirit’s operation would occur.

Some of the changes that Spirit has undertaken to bolster its operational performance include reducing aircraft utilisation in peak periods, and making adjustments to staffing and operational systems.

Data from the US DoT show that Spirit’s on-time arrival rate from Jan-2015 to Oct-2015 was 68%. Its 78% performance in Oct-2015 was a marked improvement, but still the worst among airlines tracked by the agency.

Source: CAPA - Centre for Aviation and the US DoT.

*Note: Envoy was included in the 2015 rankings, but no longer is a reporting airline. 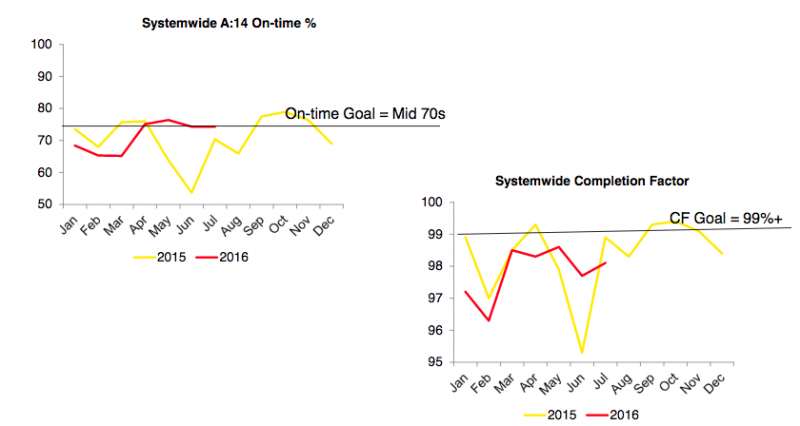 Recently, Spirit CFO Ted Christie explained Spirit’s operational performance for the busy US summer months was a record performance for the company from an on-time perspective. DoT data show that in Jun-2016 Spirit’s on-time performance was 73%, and its ranking was 10th out of 12 airlines tracked by the US government. The company posted an on-time arrival rate of 72.8% in Jul-2016, and its ranking moved up to seventh. Spirit also recorded a significant improvement in consumer complaints per 100,000 year-on-year in Jul-2016 – from 12.56 to 6.46; but the airline was still ranked in last place in that metric.

Mr Christie stated that Spirit would never be at the top of the industry in on-time performance “ever”. However, he explained that the company's view is: “actually putting ourselves into the discussion actually helps the model, long term”. Spirit expects to continue posting an improved on-time performance against its own targets in the US autumn season.

Posting an improved performance in certain operational metrics smooths out the rough edges for Spirit, said Mr Christie, and makes the airline’s product value stand out in a competitive environment when fares are being matched.

Spirit has calculated that in Jun-2016 its highest route overlap was with American (56%) and Southwest (54%). According to DoT data, American’s on-time arrival rate was 72.4% in Jun-2016 and it ranked last among the 12 airlines tracked by the agency.

One data point hardly leads to a trend, but two of Spirit’s largest competitors that have actively matched the ULCC’s prices themselves posted on-time arrival rates that were in line with Spirit’s performance in Jun-2016 and Jul-2016. That data snapshot gives credence to Sprit’s conclusion that it could help the ULCC model long term. Obviously Southwest and American are working to improve their on-time arrival rates, and over time should gain a competitive advantage over Spirit, since their internal on-time goals are far beyond Spirit’s stated target of mid-70s.

Spirit has stressed the importance of maintaining its cost structure while improving its operational reliability. Its unit costs of USD5.44 cents for 1H2016 excluding fuel and special items (a 5.6% drop year-on-year) were some of the best cost performances in the US industry.

Similarly to all US airlines, Spirit’s cost performance and margin expansion – its operating margins jumped from 19.2% in 2014 to 23.7% in 2015 – have been overshadowed by its unit revenue declines. Spirit’s drop in unit revenue has been more pronounced than it has at other airlines. Its unit revenues fell by double digits in 1Q2016 and 2Q2016, and the company has previously observed that Southwest engaged in aggressive discounting during the final weeks of 2Q2016.

Spirit has recently projected a 9% unit revenue decline for 3Q2016, citing some stability in the US market place.

Mr Christie has characterised the US market place as aggressive since the summer of 2015, and believes that the overall dynamics have not drastically changed. He highlighted that domestic capacity has grown 6% to 8% during the past couple of years. However, Spirit has picked up some signs that the industry “is attempting to do things to be supportive around unit revenue improvement and capacity constraint at the highest cost levels”, Mr Christie has stated.

The large three global US network airlines – American, Delta and United – have all made capacity adjustments for 2016, but data from CAPA and OAG show that US domestic seats are projected to grow year-on-year in early 2017, which means that the supply-demand balance may not reach rational levels until later that year.

United States of America domestic seats per week: 2014 to early 2017 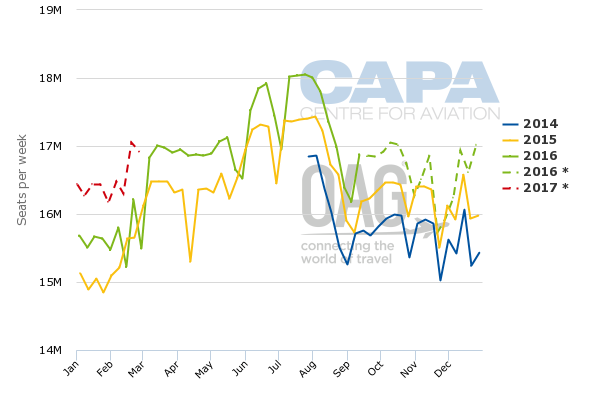 Spirit has not revised its 20% growth projections for 2016, and is likely to record annual growth rates in the 15% to 20% range for the foreseeable future. Its operating margin for the 12M ending 2Q2016 was 23.6%. The airline has repeatedly stated that it can attain high margin growth at those growth levels. Projections from CAPA and OAG show that Spirit’s system seats should be up year-on-year in early 2017. 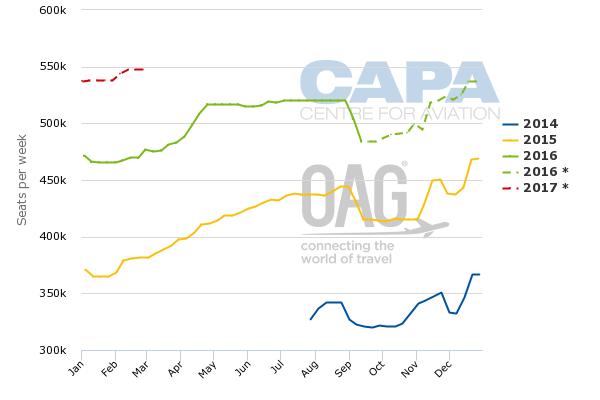 Spirit also maintains that it can achieve a solid margin performance – even in a US domestic pricing environment that is still tough. But its stock price has been on somewhat of a roller coaster ride during the last year, which in some ways reflects continued outsized investor concern about the competitive US pricing environment. 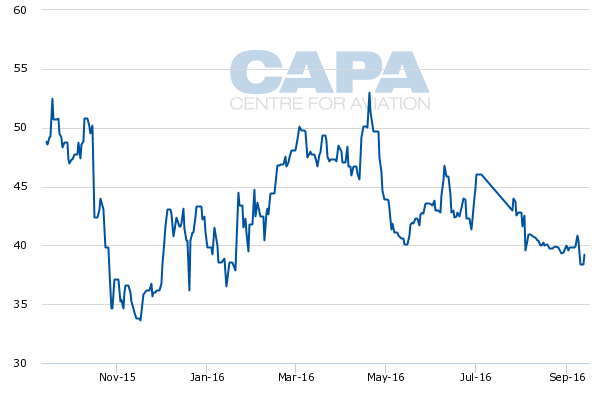 An improvement in operations was arguably a competitive imperative for Spirit Airlines, since lower fuel costs have allowed its larger rivals to lower their price points at the margins and match Spirit’s low base fares. By its own measurements, Spirit has made strides in its on-time performance; however, the company still lags behind other US airlines in key metrics, and may need to revise its internal targets at some point in the future.