Delta Air Lines and jetBlue Airways are the latest US airlines to trim their capacity forecasts, after the US major global network airlines American and United made adjustments to their projections in early 2016. The latest cuts initiated by US airlines appear to be driven by a continuing depressed pricing environment and rising fuel prices, as oil touches USD50pb again.

By reducing capacity airlines hope to restore a supply-demand balance that allows for fare increases to shore up passenger unit revenues, which have been on the decline for more than a year. Overall airline valuations show that investors remain anxious over negative PRASM, and are essentially ignoring the record profits and margins recorded by US airlines.

Delta has previously missed two separate time periods in which it aimed to return to a flat PRASM performance and has pledged to reach that goal by YE2016. As targets have slipped, most US airline executive management teams continue to stress the importance of positive PRASM and the weight it carries with investors.

American, Delta and United have all made some type of capacity adjustment for 2016

In mid-May-2016 Delta refined its capacity targets for 4Q2016 by one point to improve its unit revenue trajectory and counteract rising fuel prices. The result is system capacity growth of 2% in 2H2016 and a 3% increase in domestic markets. The airline is projecting flat international ASM growth year-on-year for the second half of 2016.

Among the three large global network airlines, Delta had the largest growth in both system capacity and domestic ASM expansion in 2015.

Delta’s domestic increases for the period 1Q2016 to 3Q2016 are averaging approximately 4.6%

Previously, Delta has stated that its overall system growth for 2016 would range from flat to an increase of 2%, which is lower than current projections for United and American. American has previously adjusted its 2016 system capacity growth by half a point to 2.5%, with both domestic and international ASMs now each rising 2.5%. Previously, American’s 2016 international growth projections were as high as 6%.

United now expects its consolidated, international and domestic capacity growth to increase 1% to 2% in 2016. At the beginning of 2016 United’s international capacity forecast was for growth ranging from 2.1% to 3.1%, a domestic increase of 1% to 2%, and a rise in consolidated system ASMs of 1.5% to 2.5%.

All of the capacity moves by the three major network airlines are driven in large part by a desire to quell investor fears about the industry’s negative passenger unit revenue performance.

Although Delta had the best performance among the three large US global network airlines during 1Q2016, and projects the smallest decrease in that peer set for 2Q2016, the airline has missed two previously stated targets for a return to positive PRASM. Recently, according to Reuters, the airline stated that it would likely hit the upper end of its PRASM guidance for 2Q2016 and trend toward the lower end of its operating margin forecast of 21% to 23%.

The company's chief revenue officer, Jim Compton, recently explained that the airline’s Latin and Atlantic entities are performing better than expected, with slightly better yields. United expects underperformance on its domestic routes, said Mr Compton, but he explained that most of the weakness was weighted toward the beginning of the quarter. As 2Q2016 was coming to a close, better close-in bookings offset some of the weakness that United encountered early in the Mar-2016 to Jun-2016 time period. It is not clear if that is an industry-wide trend, or specific to United.

United believes that it can achieve a flat PRASM performance in its domestic, Latin, and Atlantic entities by 4Q2016.

Perhaps wisely, American has not stated a specific goal for restoration of flat to positive PRASM growth, but has generally concluded that a rebound would not likely occur until 2017. It has wisely expressed the view that there are changing industry dynamics that will lead to revenue improvement, but that nothing will happen instantaneously.

See related report: American Airlines pulls many levers to improve PRASM, but cautions there is no overnight solution

jetBlue – which outperformed the industry in PRASM performance during 2015 – posted a 7% decline in total unit revenue (including non-ticket revenue) for 1Q2016 and projects a 7.5% to 8.5% drop in 2Q2016. (The company is now only reporting RASM.)

The company has opted to lower its 2016 capacity growth to 8% to 9.5%, from an original projection of an 8.5% to 10.5% increase. jetBlue cited a continuing assessment of fuel and revenue environments as the main factors in revising its capacity growth downward.

jetBlue’s valuation has fallen from the highs reached in late 2015 due, in part, to its industry outperformance in PRASM. In Sep-2015 the company’s share price reached nearly USD27; but by mid Jun-2016 it had fallen to USD16. The decline is a reflection of investor trepidation over the fact that the industry’s unit revenue performance has not yet reached an inflection point. 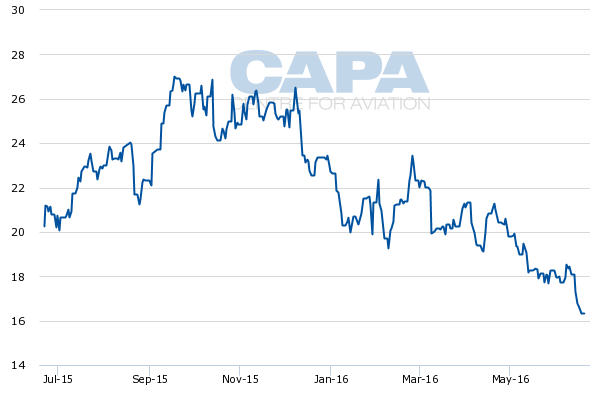 Prevailing logic dictates that once fuel costs start to increase, so too should unit revenues. Although fuel costs remain well below historic highs, crude oil prices per barrel were trading around USD49 around 3-Jul-2016, which is higher than prices the year prior.

Even as capacity growth from US airlines appears to be moderating in 2H2016 compared with 1H2016, a lag time exists between airlines reducing capacity and an ability to raise fares and reap the benefits from higher prices. American Airlines has recognised that much of the concern among investors is around the historical inverse between fares and oil prices and a solution will fail to materialise in the current cycle.

American Airlines president, Scott Kirby, has recently said that rising oil prices and capacity revisions: “I think, are correlated, and it is rational, so I think we will see that link if oil prices go up, that revenues will go up as well”.

But most US airlines are digging themselves out of a deep passenger unit revenue or total unit revenue trough, and investors should understand that regaining lost ground will not happen instantaneously.

Delta and United could reach their PRASM goals, but substantial progress could be far off

One added risk for some airlines that have declared attaining a certain PRASM performance and missing those targets (which for Delta would be a third time) is losing a certain level of credibility among anxious investors. The logic of declaring specific recovery targets is understandable to assuage jittery investors, but failing to meet those goals only deepens investor anxiety.

There is a high likelihood that Delta and United will meet the PRASM targets they have set for themselves in 2016: for Delta – reaching a flat system performance; for United – attaining a flat trajectory in all its regions except the Pacific.

But a return to robust passenger unit revenue growth may not occur until well into 2016 or beyond. Ultimately, investors will prefer a healthy performance in that metric rather than a mere break-even.