Spirit's business model is simple - having the lowest fare while focusing on ancillary products. The result has been a virtually unbroken run profitability since the carrier adopted this model in 2006. 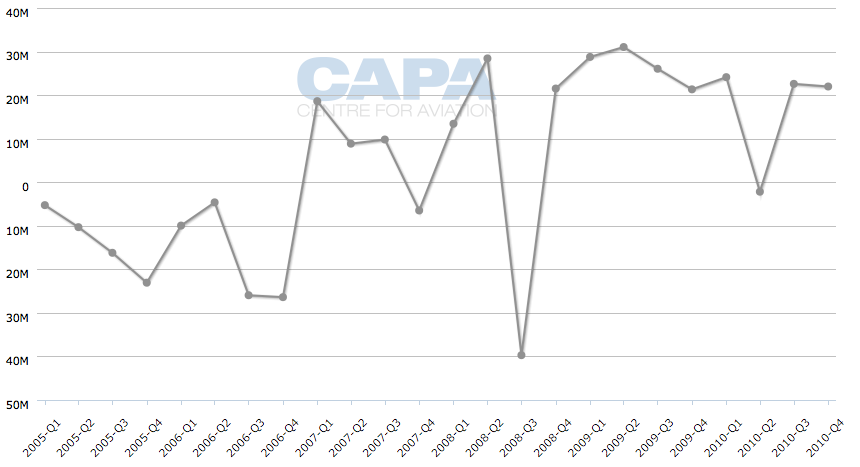 But Spirit has so far been able to become one of world's leading carriers in terms of ancillaries without offering hotels or travel packages, which is a big revenue source for most of the industry's other top ancillary revenue generators. Mr Biffle pointed out that 70% of the carrier's passengers stay in hotels and Spirit's success in its new venture all boils down to price. “If we deliver good value we get good attachment rates on hotels,” he said.

Spirit has been looking at adding hotels for some time. In a recent interview with CAPA sister publication Airline Leader, Spirit CEO Ben Baldanza cited hotels as one of several possible new ancillary revenue streams which do not involve extra charges. Spirit has primarily been growing ancillaries by focusing on in-flight sales and extra charges, including for carry-on luggage that can only fit in overhead bins.

"We see more upside in the ancillary world certainly," Mr Baldanza said in the interview with Airline Leader. "There’s a couple of ways of thinking about it. First of all, some of the growth in ancillary revenues comes without necessarily charging another fee. For example if someone pays to advertise onboard our airplane – that’s revenue that doesn’t come from any individual customers pocket that allows us to offset expenses and lower ticket prices. That’s really good – it essentially subsidizes our cost and doesn’t take it out an individual’s pocket."

"A large percentage of our customers stay at hotels. We don’t sell hotels to customers at all. If we can sell them a hotel down the road you take that commission from the sale, they are not spending any more than they were otherwise spending but we are taking a little cut off that and that helps our ancillary revenue as well. The point is our ancillary revenue can grow without us having to think how to take some money out of someone’s pocket," Mr Baldanza added.

Based on Spirit’s financial results for 2Q2011, 35% of the carrier’s revenues are now generated by ancillaries, up from 29% in 2Q2010. By expanding into the hotel and holiday package arena, Spirit will likely see its ancillaries approach 40% of total revenues - an impressive and unprecedented figure for the industry.

Spirit also announced earlier this year plans to begin charging for boarding passes that are issued at the airport. This new USD5 charge, which will be implemented from Nov-2011, should help Spirit further expand its ancillary revenues to the 40% threshold. But Mr Baldanza said the new boarding pass charge is more about reducing Spirit’s own costs rather than increasing ancillaries.

"In the case of the boarding pass fee that is as much a cost strategy for us rather than a revenue generating strategy," Mr Baldanza explained. "Certainly the $5 that customers pay for the boarding pass will show up in ancillary revenues but it’s really more of a cost strategy. A large percentage of our customers buy tickets online but don’t check in online and we don’t understand why that should be."

"Our view is we invested a lot in online check in and it works very well. There are some types of passengers who can’t check in online but that’s a very small percentage and we can handle those at the airport. We see the airport evolving over time to principally a baggage checking facility and just a small function of check-in. That’s where we see the world going and this fee is about making that happen a little bit faster. I’m not sure we expect all that many people to pay $5 for the boarding pass. We expect people to say: 'Oh, let me print it online before showing up' and that will save us a lot of money."

Mr Biffle also told investors last week that the new boarding pass fee is being introduced as part of an effort to smooth out boarding and deplaning. Even so, Spirit has lowered its fares a corresponding amount which is the carrier's standard practice when rolling out new ancillary products. Other ancillary products include airport parking, online and onboard advertising and GDS fees.

Mr Biffle said Spirit now generates on average over USD43 in ancillary revenues per passenger. He claims Spirit's ancillaries-per-passenger rate is now number one in the world. 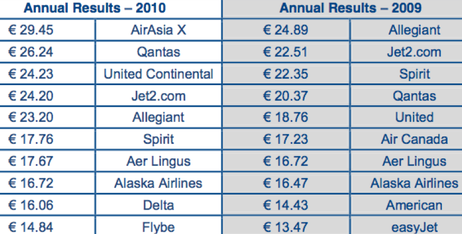 Source: IdeaWorks
Note: Results based on most recent 12-month financial periods for each carrier which in some cases ended in 2010 and 2011

Spirit more likely will be the industry leader for 2011 in terms of ancillaries as a percentage of total revenues. US low-cost carrier Allegiant Air, whose roots are in the holiday package business, was at the top of this ranking in 2010. But while Spirit has seen its portion of revenues generated by ancillaries grow from 29% in 2Q2010 to 35% in 2Q2011, Allegiant has seen its figure slip from 30% in 2Q2010 to 27% in 2Q2011. 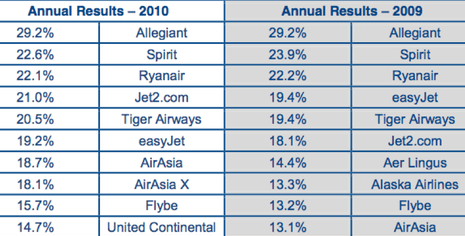 Source: IdeaWorks
Note: Results based on most recent 12-month financial periods for each carrier which in some cases ended in 2010 and 2011

Echoing the comments of his CEO, Mr Biffle does not see an end to the innovation in ancillary revenues. “We have studied the cruise industry, amusement parts and hotels and 50-60% of their revenues are from non-ticket items so there is a lot of growth left for ancillary fees,” he said. “We have a lot of things in the pipeline.”

Mr Biffle outlined the company’s strategy for success in consistently searching for new non-ticket products to enable it to lower its base fares. As it looks to enter new markets, Spirit only considers routes where it can lower fares by 25%. When it is able to lower fares by 25%, it typically stimulates a 43% increase in traffic.

“There are over 300 markets with over 150 passengers per day so there is considerable growth for us out there,” Mr Biffle said. “We expect to grow 15-20% per year through 2015. There is no another airline in world that is our size with no lower cost competitors. Break even is much lower with ancillary subsidy and there is still room to grow.”

Explaining there is no value in market share, Mr Biffle said Spirit will only grow to make money and will quickly exit a market if it does not perform to expectations.

Mr Biffle outlined the differences between the two carriers, claiming there is no way for American to compete. Mr Biffle noted its beak-even ticket price was USD65.16 while American must price tickets 186% higher just to break even. Even Southwest needs fares 50% higher to break even while JetBlue must have 110% more.

Average breakeven fare per passenger flight segment , YTD 2Q2011, for Spirit vs four other US carriers 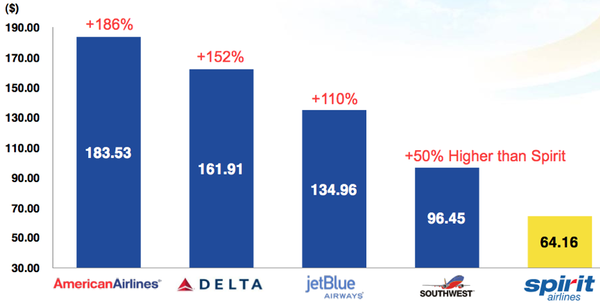 In addition to higher ancillaries, the lower break even fares are made possible through lower unit costs. Mr Biffle pointed out American has 60% more costs than Spirit. With the comparative statistics between American’s MD-80s and Spirit’s Airbus A320 family aircraft, which are 25% to 39% more efficient, it is easy to see why American sees the necessity to re-fleet with its recent mega narrowbody order.

In addition, Spirit enjoys the lowest fuel burn per seat among US carriers. “We have a 39% cost advantage just in fuel,” Mr Biffle said. 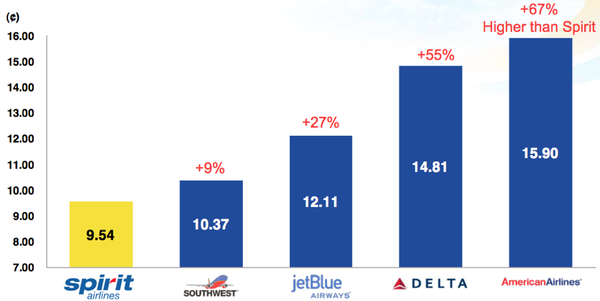