The group at least for now plans to continue relying on its full service brand in the short-haul international market despite growing competition from LCCs. African LCC groups flyafrica.com and fastjet now compete against SAA on some of its most lucrative routes and are aiming to launch several more routes to South Africa.

Competition has intensified even more significantly in South Africa’s domestic market as new LCCs FlySafair and Skywise have launched, breaking the duopoly of SAA and rival airline group Comair. Mango is responding by adding two more 737-800s, which will be used primarily to add domestic capacity.

This is Part 2 in a series of CAPA reports analysing the SAA outlook. In the first report, CAPA looked at the ongoing efforts to turnaround the carrier’s long-haul operation. A third report will focus on SAA’s evolving partnership strategy.

As CAPA highlighted in the first report, SAA’s long-haul operation has been highly unprofitable over the last four fiscal years (FY2012 through FY2015). The long-haul operation now covers nine destinations outside Africa, including three in Europe, two in the US, two in Asia-Pacific, one in Latin America and one in the Middle East.

SAA’s two regional partners, privately-owned Airlink and government-owned SA Express, account for another 16% share, giving the SAA Group control of about 56% of the market. Comair has about a 35% share including 20% for its budget subsidiary Kulula and 15% for its British Airways-branded full service operation. 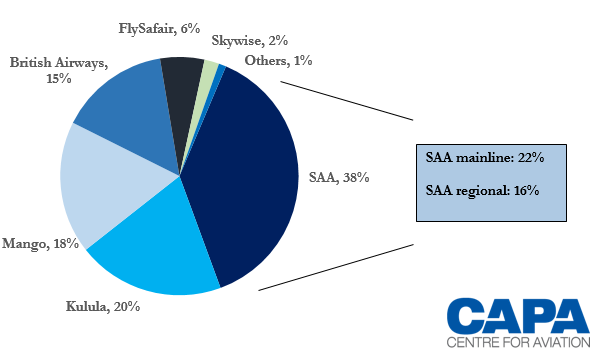 Mango has now been profitable for three consecutive year (FY2013 through FY2015) after incurring losses in FY2011 and FY2012. Mango CEO and SAA interim CEO Nico Bezuidenhout told CAPA at the IATA annual general meeting in Miami on 8-Jun-2015 that Mango had a record profit for the year-ending 30-Mar-2015 (FY2015). He said SAA mainline domestic operation was also profitable in FY2015 and is improving.

Mango currently operates eight domestic and one international route with a fleet of 10 737-800s in 186-seat single-class configuration. It currently offers about 67,000 domestic seats and only 744 weekly international seats, according to CAPA and OAG data.

Johannesburg-Cape Town and Johannesburg-Durban are Mango’s two largest routes, accounting for nearly half of its total capacity. Mango also has a large presence on Cape Town-Durban, which is no longer served by SAA mainline. As a result almost 70% of its domestic capacity is allocated to South Africa’s Golden Triangle. 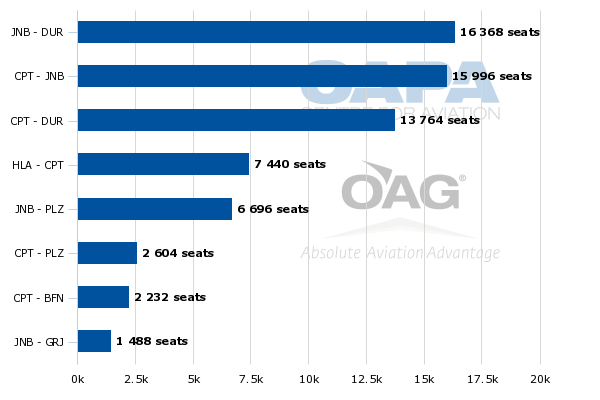 Mr Bezuidenhout said Mango plans to increase total capacity by about 20% in FY2016 as two more 737-800s are added, giving it a fleet of 12 aircraft. Almost all this capacity will be allocated to the domestic market. Mango is not currently expecting to launch new international routes but is looking at potentially adding capacity to Zanzibar in Tanzania, which it now serves with only two weekly flights.

Both of the additional 737-800s are coming out of the SAA mainline fleet but with new leases at lower rates, following the model Mango has used to expand over the last four years. Mango launched services with four 737-800s in 2006 but did not pursue any expansion until 2011, when it added its fifth aircraft. Expansion accelerated in 2013 as market conditions improved following the 2012 collapse of South African LCCs 1time and Velvet Sky.

South Africa’s domestic market again has four LCCs following the Oct-2014 launch of FlySafair and the Mar-2015 launch of Skywise. As CAPA wrote in Jan-2015, “four LCCs is generally not seen as a sustainable scenario for the long term – not even with the recent reduction in fuel prices… South Africa’s domestic market could again prove to be too small (and too seasonal) to provide the scale that an independent LCC will need in order to thrive over the long term.”

Mango is responding to the intensifying competition by accelerating expansion. As it places into service the two additional 737-800s Mango will likely add capacity on some of its existing domestic routes as well as potentially launch new routes.

Skywise has indicated it plans to launch new routes in Aug-2015 as well as add capacity on Johannesburg-Cape Town. Skywise has been evaluating Durban, East London and Port Elizabeth but has not yet announced or begun selling any additional routes. It also has not yet started selling any additional Johannesburg-Cape Town flights.

FlySafair currently operates five routes and has about a 6% share of seat capacity in the South African domestic market. About half its capacity is on Johannesburg-Cape Town and the other half is spread across Johannesburg/Cape Town to George and Port Elizabeth. 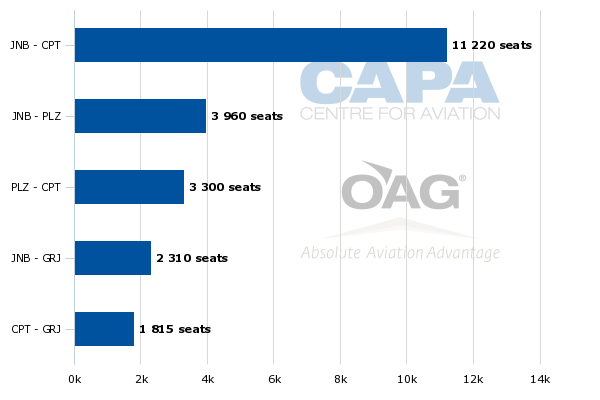 The four new routes will give FlySafair nine domestic routes in total for its one-year anniversary. Mango currently only has eight domestic routes although will be turning nine years old later this year.

So far neither Mango nor Kulula have filed any capacity increases for the upcoming southern summer season, according to OAG. But increases are likely for both LCCs as they respond to the expansion at the start-ups.

Mango could be tempted finally to enter the East London market

The launch of services to East London by FlySafair and possibly Skywise could also persuade Mango to finally start serving South Africa’s seventh largest airport. Johannesburg-East London and Durban-Lanseria are the only top 10 domestic routes in South Africa that are not already served by Mango. (Lanseria, an alternative airport for Johannesburg, is currently only served from Durban by Kulula although both Mango and Kulula serve Lanseria from Cape Town.)

Johannesburg-East London is currently only served by SAA and Kulula, according to OAG data. The SAA-branded operation includes a mix of flights operated by SAA mainline as well as flights operated by its regional partners. The SAA regional operation is currently the only non-stop competitor in the Cape Town-East London market although this will change after FlySafair launches services on Cape Town-East London in late Oct-2015.

Over the years SAA has withdrawn or handed to Mango or its regional partners several domestic routes including point to point routes such as Cape Town-Durban. SAA mainline is currently only serving four domestic routes – Johannesburg to Cape Town, Durban, East London and Port Elizabeth.

SAA management has previously stated it expects the full service mainline brand to ultimately only serve two domestic routes, Johannesburg to Cape Town and Durban, where it sees a sufficient volume of international connections to sustain a full service product as well as significant local demand from business travellers. SAA continues to study potentially handing over to Mango the East London and Port Elizabeth routes. Mango launched services from Johannesburg to Port Elizabeth in late 2012 and currently operates alongside SAA on the route – as it has done on Johannesburg-Cape Town and Johannesburg-Durban since its 2006 launch.

But Mr Bezuidenhout noted that any adjustments which are made by SAA on domestic routes could be temporary and that the group has no intentions of withdrawing the full service mainline brand entirely from the domestic market. The idea is to remain flexible and respond to demand accordingly. For example during a period of challenging economic conditions and low consumer demand for a full service product SAA could reduce capacity in a certain domestic market. But once the economy picks up again that capacity could be restored.

SAA recently increased capacity on the core Johannesburg-Cape Town route as it saw rising demand, driven by network flows. About 80% of SAA’s passengers between Johannesburg and Cape Town connect onto other SAA flights. But SAA saw a drop in demand for Johannesburg-Durban and reduced capacity. 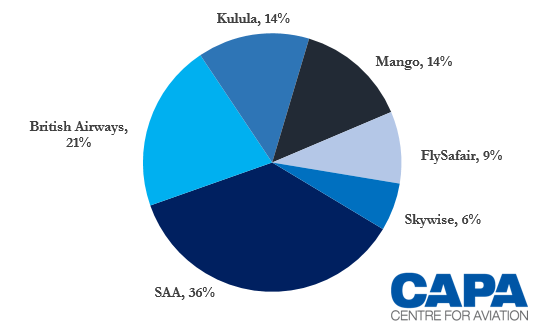 SAA still has a leading 39% share of seat capacity on Johannesburg-Durban despite decreasing capacity by 4% over the year to about 12,700 weekly one-way seats. Mr Bezuidenhout said a recent reduction on Johannesburg-Durban has been driven by down-gauging some flights to A319s which were previously used on regional international services.

SAA mainline is focusing narrowbody growth on regional routes within Africa. Capacity is being added on several existing regional international routes during FY2015 through a combination of increasing frequencies and up-gauging from A319s to A320. SAA is also increasing the average utilisation rate of its A320 fleet.

Mr Bezuidenhout said SAA projects it will be able to grow regional international revenues by 30% in the fiscal year ending 31-Mar-2016 (FY2016). The surge in revenues is expected to be generated by capacity growth along with yield and load factor improvements.

SAA is keen to add capacity on several regional international routes where it sees robust demand. But the group is not currently able to expand on most of these routes due to bilateral constraints. However, it does expect to be able to secure additional traffic on some routes and where capacity is added in FY2016 will partially hinge on where there are breakthroughs in bilaterals.

flyafrica.com added service in Mar-2015 on Johannesburg-Bulawayo, its third route in the South Africa-Zimbabwe market. But it is still aiming to launch services from South Africa to Namibia and Zambia after a regulatory setback prevented its Namibian subsidiary from launching planned Windhoek-Johannesburg-Lusaka and Windhoek-Cape Town routes in Mar-2015.

So far SAA claims the impact from new LCC competition in the Tanzania and Zimbabwean markets are not significant and it does not see a need to use Mango on any international route already served by SAA. The focus instead is on continuing to use the main SAA brand to expand in regional international markets.

Mango’s current international route, Johannesburg to Zanzibar in Tanzania, is not served by SAA. Mr Bezuidenhout said Mango could potentially be used to launch services in other similar leisure-focused international destinations that are not served by SAA such as Mombasa in Kenya. But he said “it’s nonsensical to encroach on SAA’s well-performing regional operations”.

Mr Bezuidenhout pointed out Johannesburg-Dar es Salaam is one of SAA’s 10 highest yielding and most profitable routes and remains highly profitable while fastjet has struggled initially in the market. SAA is not concerned if African LCC groups are able to launch more international routes to South Africa, or if its new local LCC competitors are able to launch international routes from South Africa, as most SAA passengers in these markets connect beyond Johannesburg to other international destinations. For example 85% of SAA’s traffic from Maputo in Mozambique, another destination targeted by the Africa's emerging LCC groups, connects beyond Johannesburg

Eventually the SAA Group may have to relook at its dual brand strategy and start to use both its full service and low-cost brands on regional international routes. fastjet, flyafrica.com, FlySafair and Skywise are all eager to pursue expansion in South Africa’s regional international market, which has some of the highest average yields in the world.

But the reality is the pace of liberalisation will continue to be very slow, giving SAA little incentive to use Mango internationally.

The focus at Mango for now is domestic expansion and given the sudden surge in new LCC domestic competition it makes sense for the group to use its well established budget brand to counter this threat.

South Africa's two start-ups will face an uphill battle against Mango and Kulula, which have a successful track record against smaller domestic LCC competitors.

Meanwhile any attempts by the start-ups to enter South Africa’s lucrative regional international market could be set back as SAA seeks to swallow up any traffic rights that become available to meet its own full service regional expansion ambitions.