Skymark Airlines President Shinichi Nishikubo, speaking at a Foreign Correspondents Club of Japan luncheon in Tokyo yesterday, outlined plans to almost triple its B737 fleet from 18 to up to 50 aircraft in four years to meet rising demand in the region.

The carrier will eventually add up to 15 A380s as it expands internationally to markets in Asia, Australia, Europe and the US. See today’s edition of Asia Pacific Airline Daily for the full report. Skymark’s shares surged 5.8% yesterday.

Virgin Blue dropped back 2.2% yesterday. CFO Keith Neate announced his resignation from the carrier on the same day the airline received approval from the New Zealand Transport Ministry for its trans-Tasman alliance with Air New Zealand. It follows the green light from the Australian Competition and Consumer Commission last week. The alliance will cover coordination of pricing, revenue management, schedules, capacity and routes flown.

In a research report, Goldman Sachs stated: “While the implementation of the trans-Tasman alliance is a positive for VBA, uncertainty around the US DoT's final decision on the proposed VBA/Delta alliance (which has more strategic importance) as well as continued weakness in domestic leisure yields are likely to continue to weigh against the stock.” Goldman Sachs retained its "hold" rating on the stock and will revise its earnings estimates alongside the release of the November traffic statistics in the next few days. 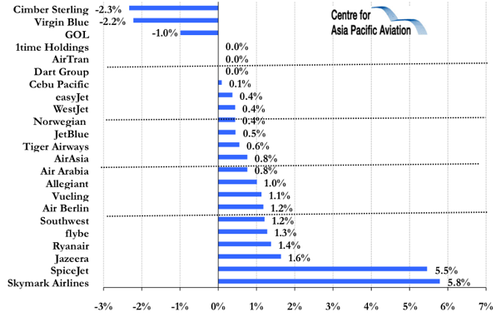