Worldwide LCC share prices were generally down on Friday (17-Jul-09), despite a stronger day on global equity markets. Investor concerns may have reflected oil prices which rallied on Friday to be back above USD63/barrel, in the wake of positive economic data and earnings results in the US and official China pointing to economic recovery in China.

Among the other major European LCCs, Ryanair slipped 1.6%, while easyJet gained 1.5%. SkyEurope led the way among the losers, slipping 18.8% after soaring 60% on Thursday.

In the Asia Pacific, shares in AirAsia and Virgin Blue remained stable on Friday. Virgin Blue shares are also stable in morning trading today, despite speculation the carrier is in talks with a Middle East carrier to become a cornerstone investor, in an effort to raise capital.

Elsewhere, in the Americas, Southwest's shares were down 0.7% on Friday, with AirTran, Allegiant and JetBlue also slipping, down 3.7%, 2.2% and 1.5%, respectively. GOL shares were also slightly down, slipping 0.6%, after a week in which its shares rallied more than 20%. 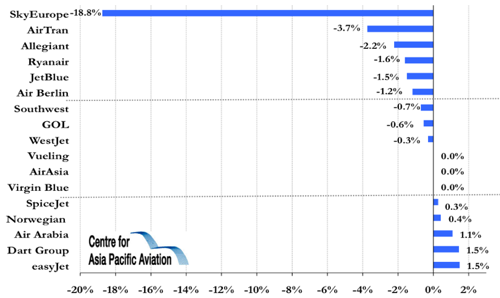