According to most who use it, Singapore Changi Airport works, and it works very well. As the recipient of countless “best” awards over an extended period, it has attained an almost mythical status, combining efficiency, service and amenities in a unique and passenger-friendly mix. Despite the airport code of SIN, it appears to err very rarely.

It’s largest tenant, Singapore Airlines enjoys a similar favourable reputation and one is tempted to assume that this symbiosis has benefitted both.

Singapore’s location made it a transport hub long before aircraft but once people took to the skies, its position made it the perfect intermediate stop between Australia and Europe. Yet as the island nation developed, it became an economic force in its own right, with its residents now having one of the world’s highest per capita incomes.

The previous airport at Paya Lebar had been activated in 1955, but by the 1970s it was clear that a larger facility would be required. Singapore Airlines, established in 1972 when Malaysia-Singapore Airlines was divided, was growing and in need of a larger facility as well. Like Bangkok’s Don Mueng, the Paya Lebar site was in danger of being constricted by urban expansion and a new site was chosen on the eastern end of the island.

With more than half of the field’s land area needing to be reclaimed and filled, the project, begun in 1975, was a huge undertaking for the nation. Six years later, in July 1981 the airport saw its first operation and was officially opened in December of that year. During the 1980s Singapore Airlines redoubled its expansion and was soon serving both Europe and North America, necessitating a second terminal, dedicated just 10 years later.

The airport ranking released in 2000 (1999 figures) found SIN ranked number 30 globally with 26 million passengers. In the 21st century a third mainline terminal was added in 2008 and a budget terminal, designed for the needs of the low cost market, was brought online in 2006. Those improvements made it possible for the airport to deal with 2010’s 42 million with room to spare.

As is to be expected, the largest share of seats is provided by Singapore Airlines with about 34%. Adding in the other two carriers based in Singapore, SQ’s Silk Air and Tiger in which it has an investment, the seat share total is 47.6%, almost identical to the “home team” allocations seen at both Hong Kong and Bangkok.

However, the number of LCCs operating at SIN is greater than was seen at either of the other two and unlike HKG and BKK, Qantas is a sizable presence. Emirates, ubiquitous at many Asian airports, also makes the A-list. But both Qatar and Etihad also fly to Singapore so the Gulf “presence” is real. 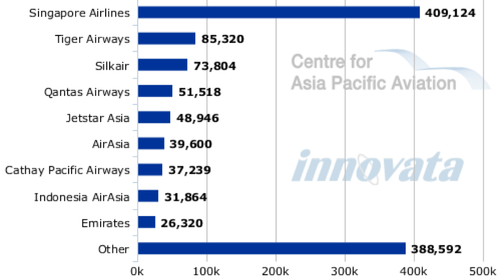 Yet the distribution of those seats is somewhat different than at either Bangkok or Hong Kong. HKG’s top region was North East Asia with a special focus on the rest of China. North Asia also led at BKK but with smaller numbers.

However, at SIN, due to the presence of Qantas, the third largest block of seats heads to the Southwest Pacific. And while the airport has service to a broad diversity of points, there are fewer seats overall to some other markets; less than half to the Middle East when compared to BKK.

It should be noted in the case of both Bangkok and Singapore that the number of seats to North America is deceptively small as only the non-stop flights are counted — which are relatively few. However, from both cities there are numerous through seats on aircraft that make an intermediate stop en-route, appearing mostly in the North Asia numbers. 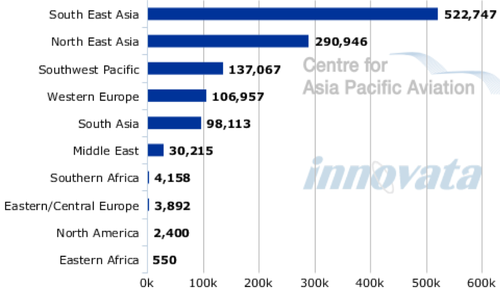 Being an island nation-state means that there is no domestic traffic at all, an attribute shared with Hong Kong, Dubai and Amsterdam, also in the top 30.

But unlike many of its peers which are dominated by network carriers, Singapore has a healthy and expanding low-cost contingent with more than 20% of its seats supplied by the group. The recent announcement that Singapore Airlines intends to create a low cost, long-haul subsidiary will further boost the segment. 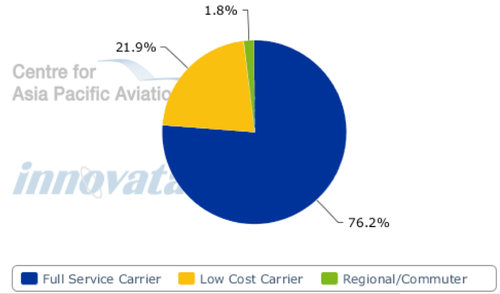 Given that the information is very recent, there is no indication as to whether the new entity will use the main terminal complex or will be based at the budget terminal which may need tweaking for longer flights. 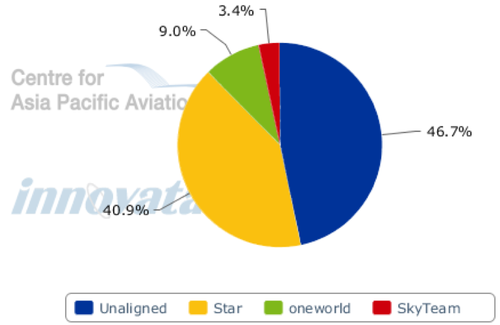 As has been the case elsewhere in the region, the presence of low cost and Gulf airlines results in a very large group of unaligned airlines serving the airport. But SQ’s membership in Star gives that group by far the lion’s share of the alliance pie.

At Bangkok, and again in Singapore we see the same pattern of minimal representation by the other two alliances, giving Star a strong position at two major Asian transit airports.

Whether the new SQ venture will add to either the Star or unaligned sector is unknown. Or, as was the case in Hong Kong with its “oneworld affiliate category”, it may occupy a new subgroup at Singapore as well.

While initially a convenient geographic way-point between mature economies, Singapore has emerged as a vibrant centre of commerce and tourism that, in addition to being a transit airport, makes it a solid and fully developed destination in its own right.

The airport is not likely to exit the top 30 any time soon.