The investment is part of a strategic industrial partnership to be forged with the shareholders’ pact of Gemina, which includes Investimenti Infrastrutture, Mediobanca, Assicurazioni Generali and UniCredit. Under the proposed industrial partnership, CAI will "play a key role in the future expansion and development of the AdR by establishing a long-term technical partnership with AdR to provide management support in areas such as airport operations, commercial development and master planning". In addition, CAI will also be represented on the Board of Directors of both Gemina and AdR.

Shares in New Zealand’s Infratil closed flat yesterday, upon the release of the company’s Jan-2010 traffic report at its investment airports in Europe. Glasgow Airport reported a decline in both passenger and cargo traffic, details include:

Meanwhile, Infratil acquired 171,000 of its Perpetual Infratil Infrastructure Bonds for an average price of NZD 66.4 cents. The securities were acquired on 26-Feb-2010.

Shares in Japan Terminal Company, operator of Tokyo Haneda Airport, were up 0.4% yesterday. Passenger numbers at the airport remained low in Jan-2010, down 7.2% year-on-year to 59.3 million, despite a boost in international passenger numbers. Details include: 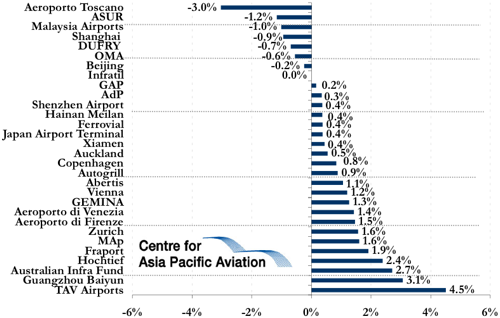