Singapore Airlines sees further improvement in load factors in May-2010

Singapore Airlines achieved a 12.3% year-on-year increase in systemwide passenger traffic (RPKs) in May-2010, which handsomely outpaced the 0.5% increase in capacity (ASKs), leading to a 7.9 ppts surge in passenger load factor to 74.8% from a weak base last year. SIA stated, “general improvement in the economic environment continued to contribute to the improvement in both passenger and cargo load factors across most regions”.

The carrier however did not disclose the impact of rising traffic and load factors on yields. 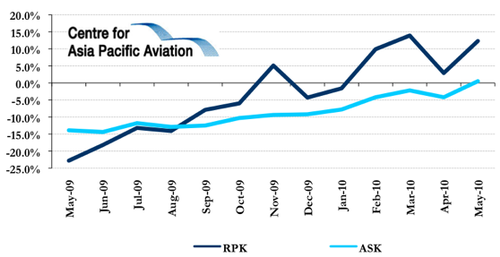 The number of passengers carried rose by 8.4% over the same month last year to 1.3 million.

The year-on-year increase in capacity arose from the injection of additional frequencies to Americas (Newark and Houston), South West Pacific (Perth), North Asia (Beijing and Shanghai), West Asia and Africa (Mumbai and Colombo) and the introduction of direct services to Munich. Five times weekly Singapore-Munich-Manchester service commenced on 28-Mar-2010.

Singapore Airlines passenger number and PLF: May-2009 to May-2010 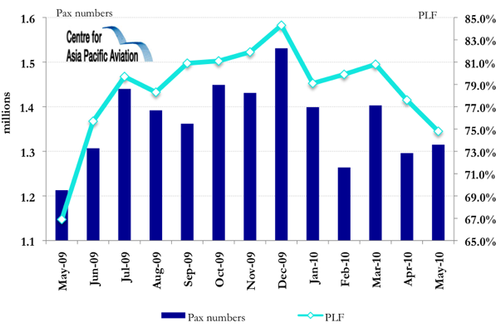 SIA’s overall cargo carriage (measured in freight tonne kilometres) improved by 16.4%, much greater than the systemwide cargo capacity injection of 7.0%. This led to a 5.4 ppts gain in cargo load factor.

Singapore Airlines FTK growth and AFTK growth: May-2009 to May-2010 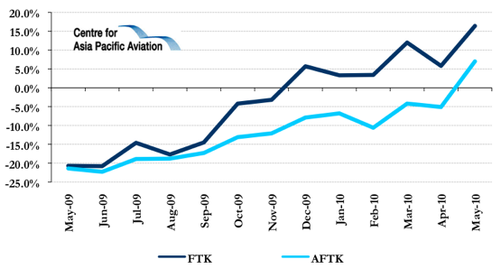 SIA closed steady yesterday, but a rally over the past week has seen the stock eclipse levels of a month ago.

SIA stock performance over the past month 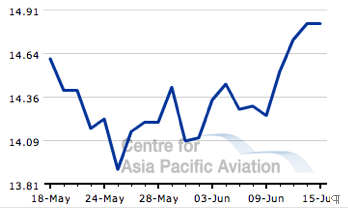 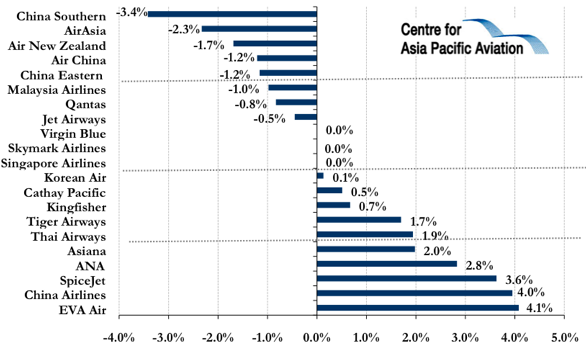