Singapore Airlines (SIA) and its regional subsidiary SilkAir remained profitable in the quarter and half ending 30-Sep-2014 despite extremely challenging market conditions in Southeast Asia. But the group’s net profit has been on the decline due primarily to the heavy losses at LCC affiliate Tigerair.

SIA is now in the process of increasing its stake in Tigerair which pending approvals will result in the LCC becoming a subsidiary. SIA is not considering taking over Tigerair entirely and instead will focus on pursuing synergies, particularly with its long-haul LCC subsidiary Scoot, while supporting Tigerair’s ongoing turnaround efforts.

SIA’s long-term outlook is relatively bright but several components of its strategy, including its investments in the LCC sector and its new full-service joint venture in India, will likely continue to have a negative impact on earnings for the short to medium term. The fact the SIA Group has so far been able to stay in the black overall is a noteworthy accomplishment.

Despite a slowdown, SIA outperforms most Southeast Asian competitors

The improvement in operating profit is noteworthy as market conditions in Southeast Asia have been extremely challenging so far this year. As CAPA has previously described, only four of the 18 publicly traded airlines (including subsidiaries and affiliates) in Southeast Asia were profitable on an operating level in the six months ending 30-Jun-2014 (CY1H2014): SIA regional subsidiary SilkAir, Malaysia AirAsia, Philippine LCC Cebu Pacific and Philippine Airlines (PAL).

SIA the parent airline had a small operating loss in CY1H2014, driven by a loss in the first three months of 2014, but was back in the black CY2Q2014 and CY3Q2014. SilkAir had a small operating profit in CY1H2014 and remained slightly profitable in CY3Q2014. But the three smaller carriers that are part of the SIA Group – affiliate Tigerair and 100% subsidiaries Scoot and SIA Cargo – were all unprofitable.

The SIA Group (including Tigerair) is the only Southeast Asian airline group so far to report results for the quarter ending 30-Sep-2014. But most airlines in the region are expected to again report losses.

For the six months ending 30-Sep-2014 (1HFY2015) the parent airline generated an operating profit of SGD183 million (USD146 million), representing a 2% reduction compared to 1HFY2014. SilkAir’s operating profit decreased by 77% to SGD5 million (USD4 million) as competition in the regional short-haul sector intensified and demand in some of Southeast Asia’s largest markets was impacted by unpredictable geopolitical factors.

SIA Engineering also reported a 34% drop in operating profits for 1HFY2015 to SGD37 million (USD30 million). SIA Cargo was in the red but was able to narrow its loss by 52% to SGD34 million (USD27 million) as there was some improvement in the cargo market.

Figures for SIA’s other airline subsidiary, Scoot, are not disclosed but the long-haul LCC remained unprofitable. Tigerair reported results separately in mid-Oct-2014, including a SGD51 million (USD41 million) operating loss at Tigerair Singapore for 1HFY2015.

Tigerair incurred a group net loss of SGD248 million (USD198 million) for 1HFY2015 compared to a loss of SGD9 million (SGD7 million) in 1HFY2014. The net loss was mainly driven by one-off items related to the sublease of aircraft and planned sale of its 40% stake in Tigerair Australia.

The Tigerair group earlier this year sold its stake in Tigerair Philippines and shut down its Indonesian joint venture Tigerair Mandala. Tigerair is now focusing on the Singapore market although it still has a small 10% stake in start-up Tigerair Taiwan.

SIA is confident Tigerair has taken the right steps to improve its financial situation, including disposing of its investments in affiliates, cancelling all of its remaining A320ceo orders and subleasing 14 surplus aircraft (includes 12 A320s to IndiGo and two A320s to Tigerair Taiwan). But during a 7-Nov-2014 analyst briefing SIA Group CEO Goh Choon Phong made it clear SIA is not giving any consideration at this point to taking over Tigerair.

Tigerair and Scoot are also now discussing a potential joint venture on overlapping routes. In addition, Mr Goh sees potential opportunities for Tigerair to start working with the broader SIA Group. SIA is not yet willing to disclose details as such opportunities can only be pursued if and when competition authorities approve SIA’s proposal to become a majority shareholder in Tigerair, which envisions increasing its stake from the current 40% to at least 55%. But Tigerair could potentially pursue joint purchasing opportunities with SIA, leveraging SIA’s larger scale.

SIA Group 1HFY2015 net results were dragged down by Tigerair 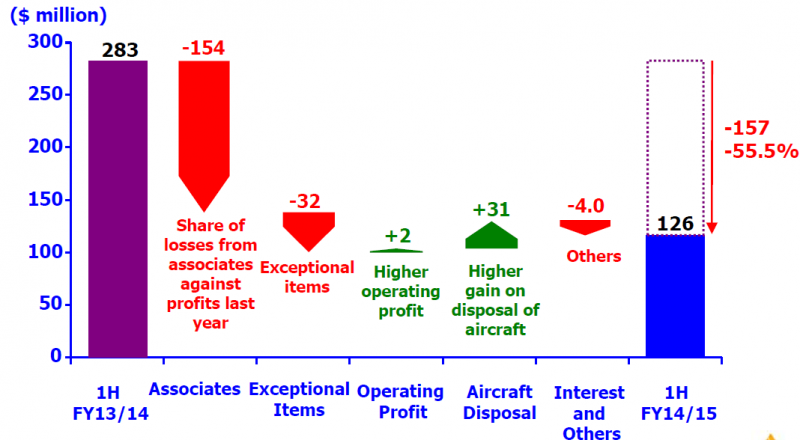 But Mr Goh sees Tigerair an “integral part” of the group’s overall strategy and during the analyst briefing pointed out how the multi-brand strategy has become common in other regions including North Asia and Europe.

Having four brands is unusual as two to three is more common. But the SIA model should be able to work as long as the two low-cost and two full-service brands are well aligned. 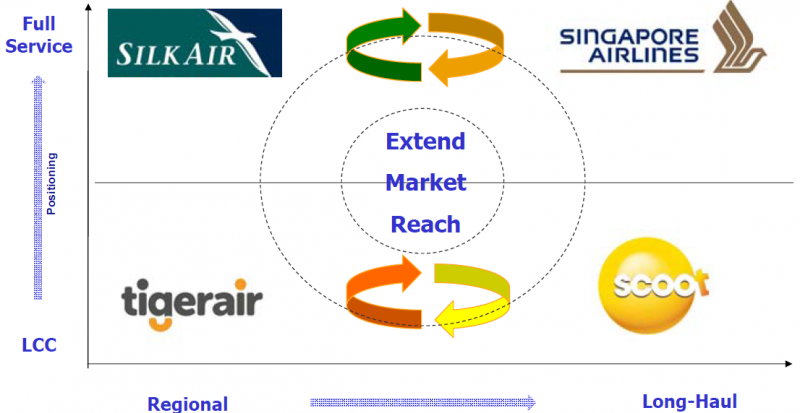 While Tigerair and Scoot have so far not been well aligned, the relationship between SIA and full-service regional SilkAir has been highly successful in recent years. Mr Goh pointed out that SilkAir now has 60% of its passenger traffic connect with SIA. Traditionally about half of SilkAir’s passengers have connected onto SIA flights.

SIA however has decided to slow the rate of growth at SilkAir in FY2015, a sensible move given the challenging conditions in the regional market. Recent expansion, partly aimed at securing key slots at Changi Airport, has been aggressive and strategically valuable, but in order to maintain load factors, yields were challenged as seats were added.

The group has not adjusted its capacity projections for SIA mainline but the parent airline was only initially expected to grow ASKs by 1% in FY2015. Capacity at SIA mainline was flat in 1HFY2015. 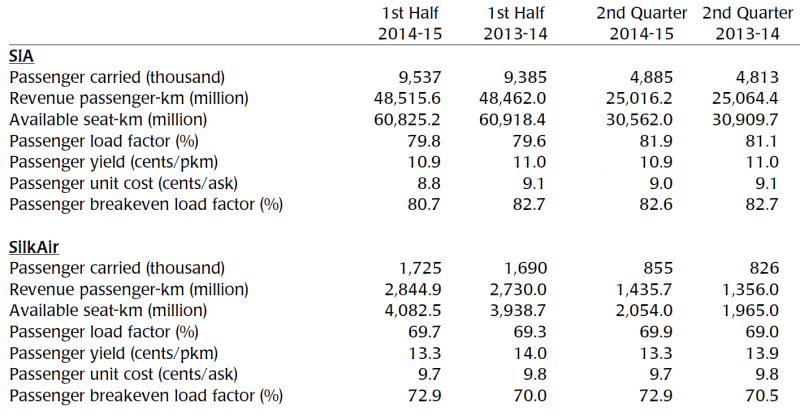 But the load factor improvements came at the expense of yields. SIA’s passenger yield declined by 2% in 1HFY2015 while SilkAir’s yield dropped by 5%.

Yields have been under pressure for the last couple of years, a reflection of the intense competition and overcapacity in Southeast Asia. SIA’s passenger yield has been flat or down on a year over year basis for 17 out of the last 18 months. 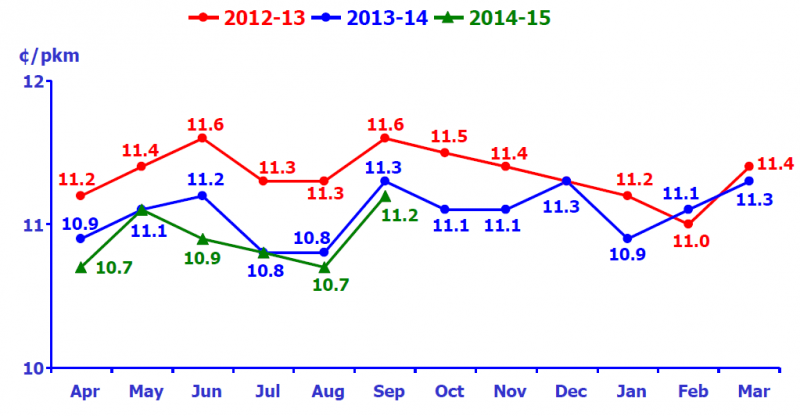 SIA expects yields will remain under pressure as competition remains intense and noted demand is relatively flat. Premium and economy yields have been affected equally but SIA has noticed more of an impact on long-haul routes compared to regional routes within Asia. Mr Goh also pointed out that Asia point of sales are relatively healthy and the China-Singapore market has recently begun recovering, after struggling for most of 2014 as inbound visitors from China dropped sharply.

Market conditions are also improving in cargo for the first time after four or five challenging years. Cargo yields improved by 2% in 1HFY2015 and SIA expects a further improvement in demand through Christmas. But overcapacity remains an issue in the cargo sector and it is too difficult to provide a reasonable forecast for demand in 2015.

The recent reduction in fuel prices is another encouraging trend for all airlines. But SIA noted that it has hedged 65.3% of its fuel for 2HFY2015 at an average price of USD116 per barrel.

SIA’s strategy is about long-term sustainability and growth

SIA’s unblemished streak of annual profits every year since it was established over 40 years ago is not likely to be broken. But profits, which have been at a modest level the last three years (about USD300 million), are also unlikely to see a surge.

The group is investing heavily in its future while somewhat sacrificing short-term profitability. Its investments in new Indian full-service carrier Vistara, which SIA hopes will launch in the near future despite recent delays and three LCCs – Tigerair, Scoot and NokScoot (which plans to launch flights in early 2015) – are not likely to pay dividends for at least a couple of years.  But these investments are critical for SIA to grow and the group is in an enviable position where it can afford to be patient – and take some risks – given its strong balance sheet.

SIA is also investing heavily on product improvements and fleet renewal. At the same time it recognises the need to work more with other airlines through partnerships.

As CAPA has previously outlined, SIA has forged new partnerships with eight airlines over the last three years and so far this year has expanded partnerships with three carriers – Air New Zealand, Asiana and Turkish Airlines.

SIA continues to expand its network through codeshares

A new alliance with Air NZ has now been approved by competition authorities and will begin in Jan-2015, when Air NZ launches services to Singapore. The expanded partnership with Turkish was implemented in May-2014 and covers over 20 destinations beyond Istanbul in Africa, Europe and North America. Previously SIA and Turkish only codeshared on flights between Singapore and Istanbul.

Mr Goh said at the 7-Nov-2014 analyst briefing that connecting passengers between SIA and Turkish increased by over 13,000 year-over-year in the four months period from Jun-2014 to Sep-2014. “We will continue to build on that relationship,” Mr Goh said.

In total SIA now places its code on over 6,500 weekly flights operated by more than 20 airlines to 208 destinations. The number of codeshare destinations has increased by about 25% since the start of FY2015. SIA continues to be on the lookout for more new partners and opportunities for expanding existing partnerships through alliances or joint ventures.

SIA is entering an important phase as it adds new alliances (starting with Air NZ), introduces premium economy, launches a joint venture in India, expands Scoot with new-generation 787s and reinforces its multi-brand strategy by increasing its involvement in Tigerair. What transpires over the next year could provide a foundation for long-term growth and potentially a return of higher profit margins.

It will be an important year; there are no guarantees in today’s highly competitive and unpredictable Asian airline sector. The group will need to be prepared to make strategic adjustments if any of its investments or initiatives start to backfire.