Shares in Indian carriers were down across the board on Tuesday (30-Jun-09), with Kingfisher, Jet Airways and SpiceJet shares slipping 6.5%, 5.4% and 4.9%, respectively, as Indian Oil Corp, India’s largest oil refiner, increased jet fuel prices by 6.5%.

India's airlines were the biggest stock market losers across Asia for the month of June.

Shares in Chinese carriers were also down yesterday on fuel concerns, with China Southern, Hainan Airlines and Air China slipping 2.7%, 1.8% and 1.3%, respectively, as the government raised local jet fuel prices by 22%, the second increase in as many months, and the third increase so far in 2009.

NYMEX and Brent oil prices fell back below USD70/barrel on Tuesday, to USD69.89/barrel and USD69.30/barrel, respectively.

Elsewhere, Japan Airlines' shares advanced 0.5%, while shares in ANA fell 1.8%, despite the benchmark Nikkei gaining 1.8%. Both carriers are planning to boost capital amid the economic downturn, with ANA reportedly planning to raise more than JPY150 billion (USD1.6 billion) in a new equity issue, the carrier’s first public share offering in more than three years, while JAL has reportedly secured emergency loans of approximately JPY100 billion (USD1 billion) from a group of Japanese banks, led by the Development Bank of Japan. 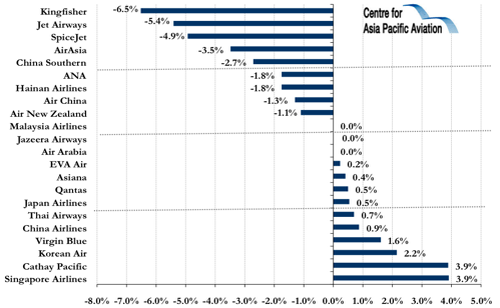