While Singapore Airlines regional subsidiary SilkAir is now celebrating delivery of its first of 23 737-800s, it is the second part of its largest ever aircraft acquisition programme that could be a game changer. The Singapore Airlines (SIA) regional subsidiary plans to take the first of at least 31 737 MAX 8s in 2H2017, enabling efficiency improvements and new medium-haul routes.

SilkAir will have the opportunity to use the MAX’s improved range to open new destinations in North Asia, Central Asia and Australia. The improved economics of the aircraft also potentially opens up destinations in India and China which are not viable with current generation narrowbody aircraft.

SilkAir is only one of four Asian carriers that has so far committed to the 737 MAX, along with Thailand’s Nok Air, Virgin Australia and Indonesia’s Lion Air. Nok, which announced its order at the recent 2014 Singapore Airshow, also expects to be one of the first carriers to take the MAX when it enters service in 2H2017.

This is the second in a two-part series of analysis reports on SilkAir and its new 737 fleet. In the first report, CAPA looked at the 737-800 and product improvements that have been introduced as the first 737-800 entered service on 20-Feb-2014.

SilkAir’s 2012 selection of the 737-800/737-800 MAX over a A320/A320neo proposal from Airbus was one of Boeing’s biggest narrowbody victories in recent years. SilkAir and Air Canada are the only all-Airbus narrowbody operators to have selected the MAX since the programme was launched in 2011. 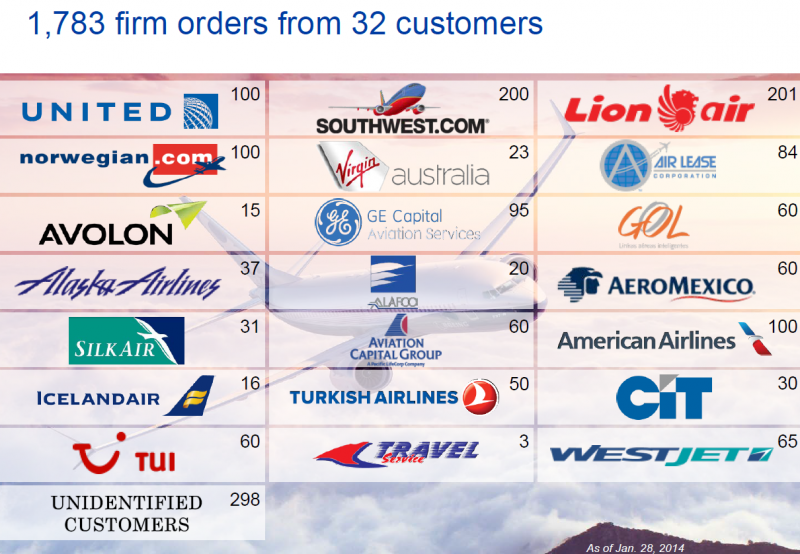 Note: 24 orders and two customers have been added over the last month, including 15 from Turkey’s Sun Express and nine from an unidentified customer
Source: Boeing

Airbus listed 2,610 orders for A320neo family from 48 customers as of the end of Jan-2014. Airbus launched the A320neo at the beginning of Dec-2010, or nine months before the MAX launched at the end of Aug-2011. Boeing claims to have secured 51% of the orders in the first two years the manufacturers went head to head.

But Boeing is still well behind Airbus in Asia. While Boeing has only secured commitments for the MAX from four customers in Asia-Pacific (including Nok), Airbus has secured A320neo family orders from 10 carriers or airline groups in the region: AirAsia, Cebu Pacific, Citilink, Go Air, IndiGo, Lion, Philippine Airlines, Qantas/Jetstar, TransAsia and VietJet Air. (The VietJet order for 42 A320neos was confirmed on 11-Feb-2014 but is not included in the 2,610 figure.)

Nearly all of the A320neo orders are from LCCs or groups which have LCC subsidiaries. Airbus currently has a 72% share of LCC orders in the Asia-Pacific sector, according to Airbus senior vice president government affairs Francois Desprairies.

Several other Asian airlines are currently evaluating the MAX

Boeing is confident it will log several more MAX orders from Asian customers over the next year as several existing 737NG operators have ongoing campaigns. China is also expected to place another bulk order which should result in several Chinese carriers emerging as 737 MAX customers. Boeing is also hoping to woo more Asian A320 operators, including Singapore-based LCC group Tigerair.

As CAPA reported in the first part in this series of analysis reports, there are currently 68 A320s registered in Singapore but only one 737, the 737-800 which was delivered to SilkAir on 3-Feb-2014. Boeing was particularly keen to transition SilkAir from Airbus because Boeing has not had a narrowbody in the Singapore market for over 10 years.

SilkAir, Nok and Lion all to be among early 737 MAX operators

Nok CEO Patee Sarasin tells CAPA that the carrier also has secured 2017 delivery slots for the 737 MAX as part of its recent commitment for eight 737-800s and seven 737 MAX 8s. He says Boeing has not yet confirmed how many 737 MAX 8s it will take in 2017 but most likely it will be a batch of two aircraft.

SilkAir, Nok and Lion could end up taking more 737 MAXs in 2017 than currently expected as Boeing is planning to consider further accelerating the programme. Initially the 737 MAX was slated to enter service in 4Q2017 but Boeing in Jun-2013 moved the schedule up by three months. 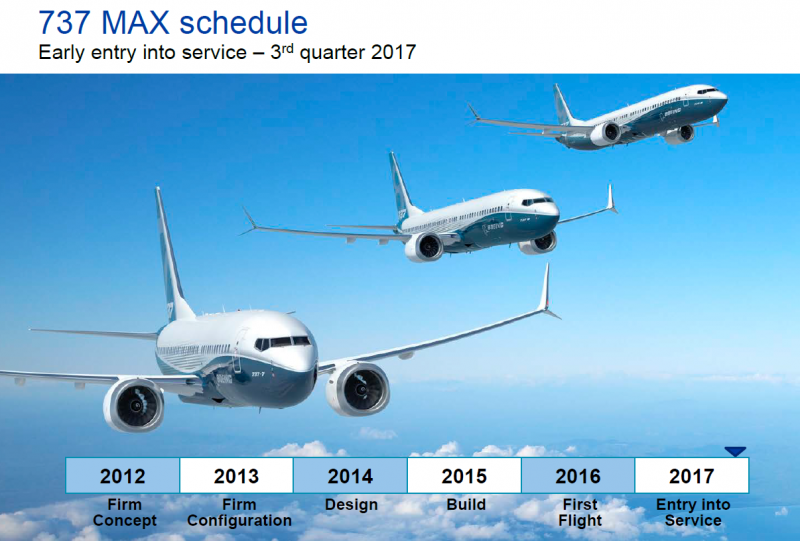 Boeing 737 MAX vice president and general manager Keith Leverkuhn says Boeing could further accelerate the programme, which could potentially enable some customers to start taking aircraft in 1H2017. There is some buffer in the current schedule, making it more likely the MAX programme will be accelerated than delayed.

While an earlier entry into service is not part of the current plan, it could become part of the plan by the end of 2014. “This is really the year of execution for us and ensuring if we can accelerate the schedule,” Mr Leverkuhn says.

From Singapore the 737 MAX 8 will have the range to serve Kazakhstan (both Almaty and Astana), Madagascar (Antantarivo), all of Australia (including Sydney and Tasmania) and Sapporo on the northern Japanese island of Hokkaido. There are several other routes from Singapore which are just within the range of the 737-800 but are more likely to be viable with the 737 MAX 8 – including the US island of Guam, Port Moresby in Papua New Guinea, Busan in South Korea, Ulan Bator in Mongolia, Harbin in China and Hiroshima in Japan. 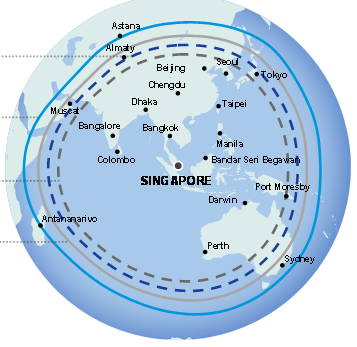 SilkAir’s current longest route is Singapore-Kathmandu, which is about 1,900nm and approximately five hours in duration. SilkAir currently does not have to overnight crews at any of its 45 destinations. Kathmandu falls within duty time limits as it is served with day flights in both directions. (If Kathmandu was served at night, crews would have to overnight because under Singapore regulations duty time limits for night shifts are more stringent than for day shifts.)

The carrier will likely have to overnight crews as it looks to make use of the improved range that comes with the 737 MAX 8. As a full-service carrier, the extra cost of overnighting crews is not a deterrent. While there may be higher ex-fuel costs associated with operating longer flights, these will be offset by the lower fuel costs that come with the 737 MAX and the potential yield and network benefits from opening long thin routes. 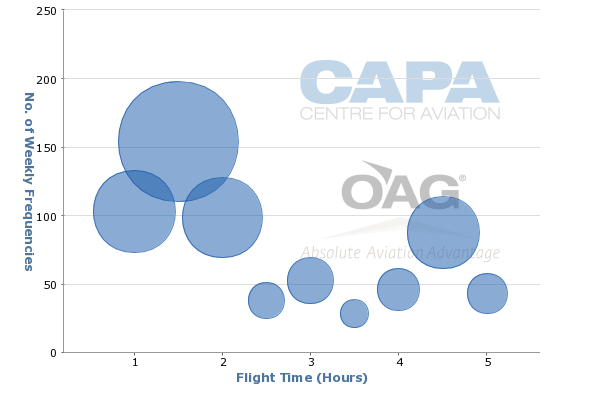 SilkAir has already been working on upgrading its in-flight product in response to customers seeking more services on longer flights. In Dec-2013 the carrier began offering overnight amenity kits and trialling wireless in-flight entertainment, which will be fully implemented in 2Q2014. The 737-800 will have power sockets across both cabins, making it easier for customers to take advantage of the complimentary wireless IFE on longer flights, as well as in-seat audio and larger drop down screens.

With SIA operating an all-widebody fleet, there will be opportunities for SilkAir to open up new thin medium-haul routes in the five to seven hour range which would not be viable with widebody aircraft. Much of SilkAir’s focus will be on further growing its networks in India and China, where it now serves eight and seven destinations respectively.

SilkAir currently does not serve northeast China or northwest India, populated areas which are of interest to the SIA Group. While SilkAir can theoretically reach most potential destinations in these regions with the A320 or 737-800, the improved efficiency of the 737 MAX will make such routes more attractive. 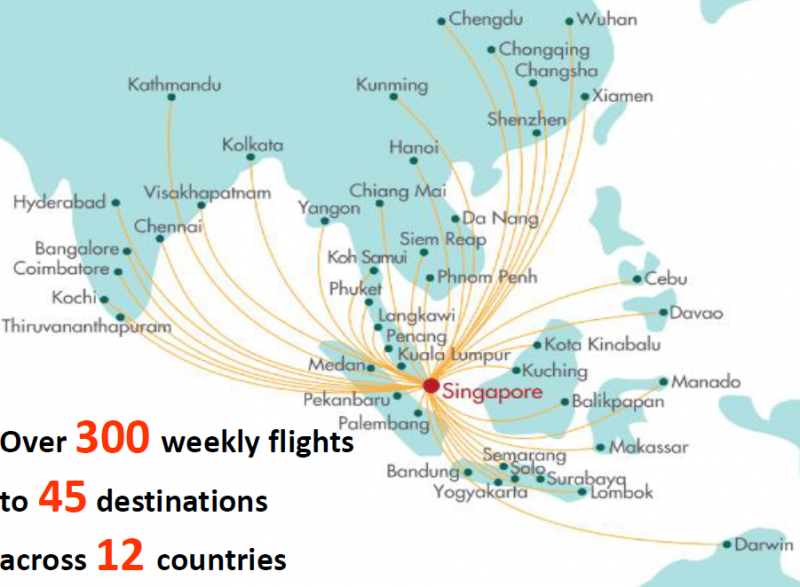 Kazakhstan and Madagascar would be more unusual destinations for the SIA Group but with the right partnerships could improve SIA’s access to Central Asia and Africa. SIA currently does not have any services to Central Asia and only serves South Africa and Egypt in Africa.

Singapore Changi has a much weaker African network than most other Asian airports. It also does not have any Central Asian connections while rival Bangkok has several. Air Madagascar currently serves Bangkok and Guangzhou while Kazakhstan’s Air Astana serves Bangkok, Beijing, Ho Chi Minh, Hong Kong, Kuala Lumpur and Seoul.

Changi also does not currently have any non-stop flights from northern Japan, southern South Korea, Mongolia or Guam. A new-generation narrowbody could make such six to seven hour routes viable. Papua New Guinea, which is just over six hours from Singapore and is only served by Air New Guinea with four weekly 767 frequencies, could also become a viable route for the SIA Group.

While the SIA Group will continue to serve the main Australian cities with widebody aircraft, there are also opportunities to extend the network to more secondary cities using the new SilkAir narrowbody fleet. SilkAir currently only serves one destination in Australia, Darwin, which it launched in 2012 and has been highly successful.

Cairns would be a logical second destination for SilkAir once it takes the 737 MAX 8. The Singapore-Cairns route has not been served non-stop for several years. Australian Airlines served the route with 767s before the Qantas leisure subsidiary ceased operation in 2006. The route would be more viable with smaller aircraft but is currently just out of economical range with current generation narrowbodies (it theoretically could be served but with payload limitations.)

Even Tasmania would be within range of the 737 MAX 8 from Singapore, according to Boeing figures. But Tasmania is less likely to support non-stop services as it is highly seasonal and completely an end of the line destination. With Cairns SilkAir could potentially work with SIA Group’s close partner Virgin Australia for feed, as it now does with Darwin.

New thin medium-haul routes for SilkAir could play an important role in the overall SIA Group long-term strategy as it will open up network options, providing more feed for SIA’s long-haul network. About 50% of SilkAir’s passengers now connect to or from SIA-operated flights.

Over the next three years SilkAir will review several potential new medium-haul destinations as it prepares for its first 737 MAX 8. In the meantime the carrier could use its new 737-800 fleet to open more destinations in the five hour range, particularly in western or northern India and northwest China.

While SilkAir has always been known as a regional carrier, there are attractive opportunities to add destinations further afield. Several new medium-haul destinations would help SilkAir further differentiate itself from Southeast Asia’s low-cost carriers and provide important new sources of feed for parent SIA in an increasingly competitive environment.