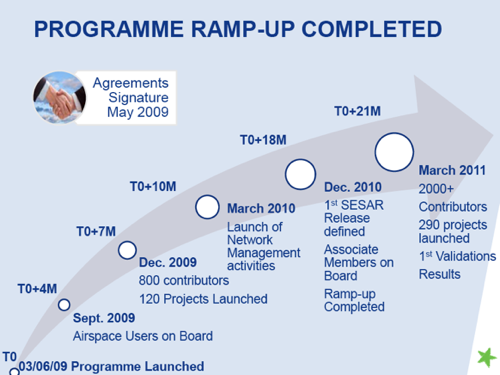 The SESAR JU is the public-private undertaking tasked with developing and running more than 300 tasks and programmes under the Single European Sky project, spread across 13 partners and 110 contractors and contributors. The total estimated cost of the development phase of SESAR is EUR2.1 billion, shared between the European Community, EUROCONTROL and the programme’s industry partners. 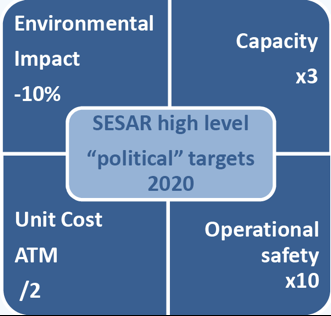 Each project has an estimated average cost of EUR7 million and a duration of four years, with dependencies spread across five other programmes. This year alone, SESAR JU will conduct 29 validation projects around Europe, aimed at developing the procedures, policies and products that Europe will base its air navigation system on for the next few decades.

The projects for the "Release 1" 2011 have been verified and validated in an operational environment, to allow for a decision on industrialisation and subsequent deployment. These programmes have been selected based on where the best early results and enhancements can be achieved.

Other projects are being lined up for Release 2 due in 2012. These will be more aggressive in terms of the number and types of activities. More releases will be rolled out on a yearly basis.

Bridging the gap with the rest of the world

With global interoperability necessary in aviation, Europe cannot afford to be isolated in a global ATM context. Interoperability is key in ensuring a coherent global solution set, that works with the systems put in place.

Crucially, the US NextGen air traffic management system upgrade is running concurrently with SES. SESAR and the US Federal Aviation Administration are cooperating to ensure that there is common ground for both systems and that development of both system will support harmoniSed Implementation and the formation of new industry standards and regulations.

On 03-Mar-2011, the FAA and the European Union formally signed an agreement to work together on ATM research aimed at providing seamless air traffic services between the US and Europe. The agreement outlines a general legally binding framework under which the parties will work

The agreement calls for both sides to research the interoperability of avionics, communication protocols and procedures, as well as operational methods under NextGen and SESAR. The agreement encourages industry participation on both sides of the Atlantic, ensuring the development, harmonisation and use of the best technologies available. NextGen and SESAR will provide the initial foundation for "global block" upgrades that can be expanded to other regions around the world, laying the foundation for expanding air traffic modernisation.

The goals of SES are lofty: by 2020 the programme aims to triple European ATM capacity and halve its unit costs, at the same time as producing a tenfold safety improvement and a 10% cut to the environmental impact of aviation. Despite the promise that the first elements will be introduced this year, airlines are not convinced that enough is being done to accelerate airspace reform and the introduction of new technologies and procedures. European runway capacity shortages also need to be addressed.

Association of European Airlines Secretary General Ulrich Schulte-Strathaus recently called on European states to avoid any delays when implementing steps necessary to unify European airspace and abandon any attempts to water down or delay efforts in ATM reform. In 2010, the AEA expressed its disappointment at the compromise targets set for ATM costs for the 2013 to 2015 period.

The AEA also called for a commitment for public funding of SESAR, commensurate with its importance as a pan-European project.

National interest and resistance to change remain two of the greatest impediments to the adoption of European airspace reform. Europe’s network of air navigation service providers are wildly divergent in their characteristics, but the greatest impediment to reform remain human rather than technological factors.