Amid an environment of cost control, confrontation and change among Scandinavian airlines, the Swedish Airline Pilots Association (SweALPA) took its pilots out on strike briefly in mid-Jun-2010.

Commuter airlines were worst hit, although the majors also suffered. But, after losing ground, Norwegian Air Shuttle (+7.4%), Cimber Sterling (+6.5%) and SAS (+5.8%) all recovered strongly on Friday 2-Jul-2010, as industrial relations fears waned. This could signal a return to a more stable airline atmosphere among the Scandinavian airlines.

With markets generally up across Europe on the day (in contrast with Wall Street, where another sombre trading day led into the Independence Day weekend), most airline shares performed well. Turkish Airlines (+3.5%), Air Berlin (+3.1%) and Ryanair (+3.0%) were the larger winners. See related report: End of an era: Ryanair continues shift away from UK/Ireland

The exception was Jet2.com’s parent, Dart Group, losing 4.5% on the day, after gains earlier in the week. 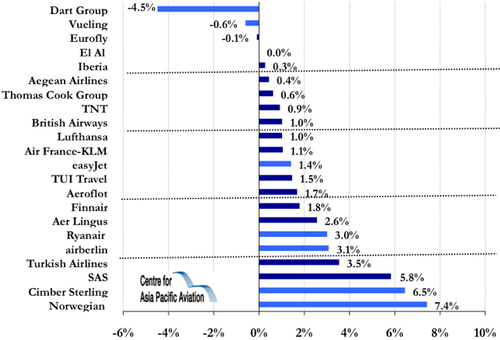