European airline shares were mixed on Monday (21-Jun-2010), despite wider markets reaching a seven-week closing high for the day. Markets gained on the Chinese Government’s moves to loosen controls on the exchange rate, boosting investors' hopes for the global economic recovery.

SAS (-2.8%) recorded the day’s biggest decline on comments over the weekend that it plans to take a counter-offensive stance against competitors that have taken market share from SAS. The carrier stated that above all, it plans to defend its position on important business routes.

Turkish Airlines (-1.0%) was also down. During trading, the carrier launched four times weekly Istanbul-Alexandria service, with the new route increasing the carrier's destinations to 124 worldwide. The carrier added that it expects to add nine more flights to its network this year to increase passenger levels from 25 million in 2009 to 31 million in 2010.

British Airways (-0.2%) slipped after news its cabin crew union, Unite, is expected to advise the carrier of plans to launch a new ballot for strike action on 21-Jun-2010, which could mean voting will commence next week. If cabin crew vote for the strike, action could commence as soon as 03-Aug-2010. Joint General Secretaries, Tony Woodley and Derek Simpson, told crew there are three areas of dispute: the carrier's use of volunteer cabin crew; the removal of travel concessions from striking staff; and “vindictive” disciplinary action against at least 70 staff.

BA CEO, Willie Walsh, has vowed the carrier will operate 100% of its long-haul operations if strike action resumes. Mr Walsh also commented that the ongoing issue is not over the return of travel concessions, stating the perks would have been reinstated had Unite accepted BA’s latest offer. 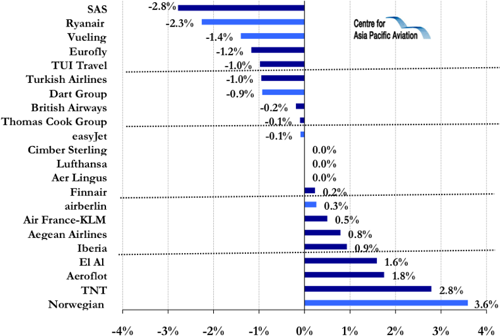