Ryanair Group's results for FY2019 (year to Mar-2019), although expected, sound a warning to the European airline industry.

Europe's highest margin airline group reported its lowest profits in five years and suffered a 10ppt drop in its consolidated operating margin as average fares fell by 6%. Moreover, Ryanair expects further declines in ticket prices and another year of falling margins in FY2020.

However, Ryanair is well placed to weather storms of this nature. In spite of the precipitous drop in its profits last year, it still had the highest operating margin of Europe's big five airline groups, ahead of IAG, easyJet, Lufthansa Group and Air France-KLM. Moreover, strong growth in its ancillary revenues helps to offset weakness in fares.

More ominously for others, falling fares are a deliberate ploy by the ultra LCC to maintain its industry-leading load factors, taking traffic from higher cost airlines less able to cope with price competition.

As the European airline industry moves through a downturn in the profit cycle, this approach should ensure that Ryanair is a beneficiary of the resultant consolidation. IAG, easyJet, Lufthansa Group and Air France-KLM are also likely to benefit, but Ryanair's superior profitability gives it more headroom to navigate the increasing downward pressure on margins.

Ryanair passenger numbers up to 139 million (142 million with Lauda)

Its new Lauda subsidiary, wholly acquired in Dec-2018 after Ryanair originally took a minority stake in the start-up at its launch in Mar-2018, carried 2.9 million passengers. (The full name of this subsidiary, Laudamotion, has been abbreviated to Lauda).

This gave the group a total of 142.0 million passengers, which was 9.0% above the previous year.

The Ryanair Group total was only a little short of the 143.2 million passengers carried in the same 12-month period by the Lufthansa Group, with its five airlines.

Ryanair's load factor increased from 95% in FY2018 to 96% in FY2019 (Ryanair only reports load factor to the nearest percentage point).

This results from its 'load factor active/yield passive' policy, whereby it achieves a high target load factor by adjusting fares accordingly. This often means that yields fall, and its average fare dropped by 6% in FY2019.

Ryanair's load factor is comfortably the highest among Europe's five leading airline groups (and is unlikely to have been bettered by any significant airline in Europe). 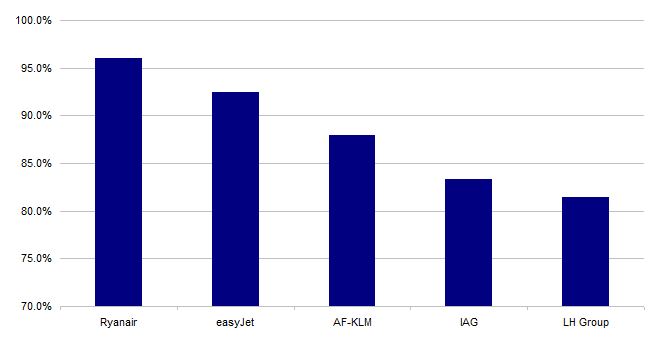 Ryanair's FY2019 net profit was its lowest in five years

This included a EUR140 million net loss from Lauda, a result that Ryanair is treating as exceptional to reflect the start-up nature of its Austrian subsidiary. From next year, when Lauda is expected to be profitable, only consolidated group results will be reported.

In summer 2018 the group also launched its Polish subsidiary Ryanair Sun, since rebranded as Buzz. Its results were not separately disclosed, other than to say that it "delivered a modest profit".

Excluding the Lauda loss, the result was a net profit of EUR1,025 million, which was 29% below the result from the previous year on a like for like basis and the lowest result for five years. 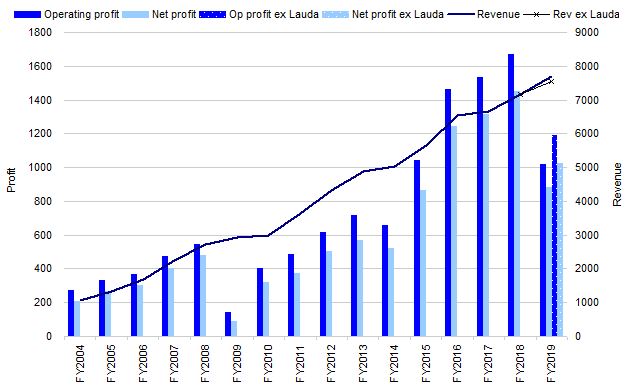 The deterioration in Ryanair's operating margin was the result of falling revenue per passenger and rising cost per passenger.

But even in a bad year, Ryanair still has the highest margins of Europe's big five

Even with this slump in Ryanair's margin, it is still the most profitable among Europe's big five airline groups by pre-exceptional operating margin.

Even if the Lauda losses are included in Ryanair's result, its operating margin of 13.2% is still joint top of the league alongside IAG. The difference between them, however, is that this result was IAG's best ever margin, whereas it was a disappointing one for Ryanair.

(Note that Europe's second highest margin among all airline groups in recent years has been achieved by Wizz Air, which reported an operating margin of 15.0% in FY2018 (year to Mar-2018). Its FY2019 results are due on 31-May-2019, with analyst consensus forecasts expecting a margin of 12.7%). 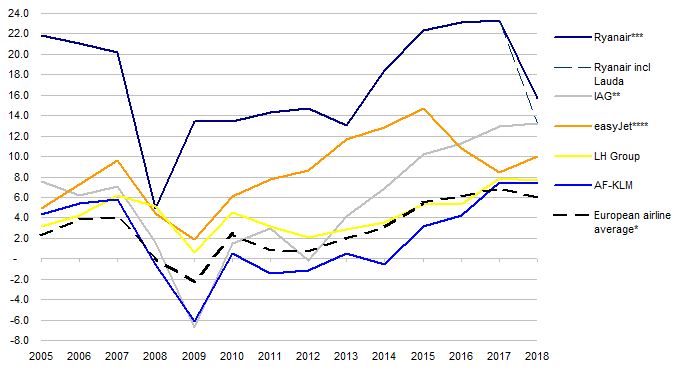 *2018 figure for European airline average is IATA estimate.
**IAG based on sum of British Airways and Iberia for 2005 to 2008 and pro forma data supplied by IAG for 2009 & 2010 (IAG was formed in Jan-2011).
***Ryanair data for the financial year to the March following the year shown; Ryanair.
****easyJet data for the year to Oct.
Source: CAPA - Centre for Aviation, airline company reports, IATA.

Outlook: another margin decline for Ryanair is a further signal of a downturn

Ryanair expects the group to carry 153 million passengers in FY2020 (an increase of 8%), including 6 million for Lauda.

It hopes to take delivery of its first five (delayed) Boeing 737MAX-8s in the coming winter season, but meaningful cost benefits will not be gained until FY2021.

However, Ryanair's guidance of flat profit on higher revenue implies a further fall in its profit margins.

Risks to the outlook that are highlighted by Ryanair include ATC disruption, security events, Brexit developments and yield development. This is, in fact, a useful summary of the risks facing European airlines in general.

Historically, Ryanair has reported better margins than the rest of Europe's big five airline groups, even when its margins have fallen sharply. Ryanair's profit guidance is a further signal of a downturn in airline profitability.