Ryanair: what’s going on? Profit warnings, low growth and customer service are not what we expect

Ryanair saw its 1HFY2014 net profit increase, reversing the decline posted in 1Q. Indeed, its 2Q profit was its highest ever quarterly result. The quarter saw an increase in average fares, strong growth in ancillary revenues and a fall in sector length-adjusted costs per passenger. However, Ryanair also gave its second profit warning in two months, a reflection of what it sees as a weak fares outlook across Europe.

For an airline that saw compound average growth in passenger numbers of 18% per annum in the 10 years to FY2013, does planned growth of 2% in FY2014 and 3% in FY2015 mean that opportunities are drying up?

Announcing a return to allocated seating and a host of customer service initiatives and product enhancements, is Ryanair moving away from the purist LCC model?

Revenues grew by 5% in both 1H and 2Q on passenger growth of 2% and 1% respectively. Average fares dipped by 2% in 1H, but were up by 1% in 2Q, while strong ancillary revenue performance pushed revenue per passenger up by 2% in 1H and by 4% in 2Q.

Revenue growth of 5% in 2Q and 1H was driven by the strong growth in ancillary revenues (+20% and +22% respectively). Ryanair’s roll out of reserved seating, priority boarding and higher credit/debit card fees were responsible for this. As predicted by Ryanair, scheduled revenues performed better in 2Q than in 1Q, with average fares growing by 1% after falling by 4% in 1Q. Nevertheless, Ryanair management say that fare weakness is characterising all its markets.

Cost growth was broadly in line with revenue growth

Growth in operating costs in 2Q was broadly in line with revenue growth of 5%, driven substantially by an 8% increase in fuel costs. Costs excluding fuel grew by 2% in 2Q, only slightly faster than the 1% growth in passenger numbers in spite of sector length increases. Sector length-adjusted ex fuel costs per passenger fell by 2%. Ryanair expects this measure to fall by 7% in 2HFY2014.

But there is '…a weaker pricing environment out there'

In spite of a strong 2Q result, Ryanair expects a fall in FY2014 profits of the order of 10% as a result of weakness in average fares across its markets. Ryanair’s business model involves being what Chief Executive Michael O’Leary describes as “load factor active, yield passive”. This means that any weakness in demand shows up in lower fares, rather than in lower passenger numbers.

“There’s a weaker pricing environment out there. Get over it. Ryanair’s response is to be aggressive about it, putting more low fares out than anyone else. The difference with others is that Ryanair’s costs are lower”, Mr O’Leary told analysts on a conference call to discuss the 1H results.

Lower fares have had a positive impact on demand. Passenger numbers grew by 6% in Oct-2013 and Ryanair says that winter bookings are ahead of this time last year. Nevertheless, a lower average fares outlook has led Ryanair to lower its FY2014 net profit guidance to a range of EUR500 million to EUR520 million, from its previous range of EUR570 million to EUR600 million. This is Ryanair's second profit warning after it said in Sep-2013 that net profit would be at the low end of its range, or even below it.

While weaker pricing dents Ryanair’s profitability in the short term, Mr O’Leary regards such periods as positive for its longer term prospects: “We will take whatever price we get because whatever it is, it will be significantly below what our competitors can do and significantly below our unit cost.” This will often lead to competitor capacity cuts, providing growth opportunities for Ryanair. Mr O’Leary currently sees such opportunities in Spain, France, Italy, Central Europe, Scandinavia and Germany.

As a result, Ryanair remains confident of its longer term growth prospects and it has again revised its fleet plan modestly upwards. Under the order for 175 Boeing 737-800s announced in Mar-2013, it now expects its year end fleet to increase from 305 aircraft at the end of FY2013 to 420 aircraft at the end of FY2019. This is an increase of 10 aircraft relative to the last revision and reflects a lower number of lease returns during the current financial year, FY2014.

There is no significant change to Ryanair’s planned passenger numbers over the period. After 2% growth in FY2014, it expects 3% in FY2015, 6% in FY2016 and 7% thereafter to FY2019. Ten year growth deals with London Stansted and Warsaw Modlin help to fill in some of the detail of how it will achieve these plans. 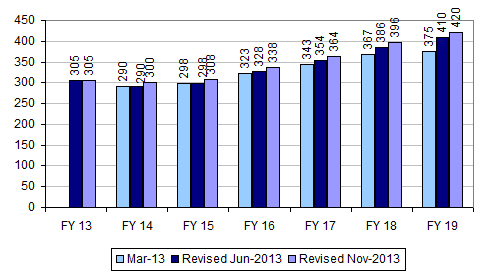 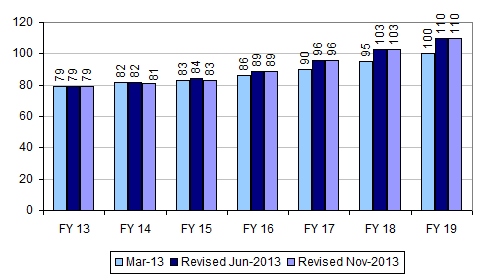 Seasonality of earnings is becoming even more noticeable

The two quarters of 1HFY2014 had mixed fortunes. Profits fell in 1Q and rebounded in the seasonally strong 2Q to reach their highest level in Ryanair’s history. With EUR602 million of net profit in 1HFY2014 and guidance for EUR500 to EUR520 million for the year, this implies a loss of up to around EUR100 million in 2HFY2014.

Dividing 2H into its component quarters, the 4Q outlook is weaker than 3Q. Ryanair expects 3Q to see passenger numbers up 3% and average fares down 9%, while 4Q is expected to record a 1% fall in traffic and a 10% drop in average fares. In recent year, 4Q has been loss-making, while 3Q has seen a breakeven to slightly positive result. If this pattern is repeated, Ryanair’s guidance suggests that 4Q could post a record loss in FY2014.

A record profit in 2Q, accounting for more than 100% of expected annual profits, and a record loss in 4Q again highlight the growing seasonality of Ryanair’s results and its strong reliance on summer profits. The carrier’s response is to ground aircraft in the winter season.

In winter 2013/2014, Ryanair plans to ground 70 aircraft. This is a significant proportion of the total fleet of around 300 aircraft, but fewer than the 80 grounded last winter. The trick is to balance lower winter demand with the need to maintain a minimum workable schedule. Mr O’Leary says that he could reduce the winter schedule further, but this is not desirable: “If we cut it any more, you’re going to start getting into sub-optimal schedules on some of those routes”. 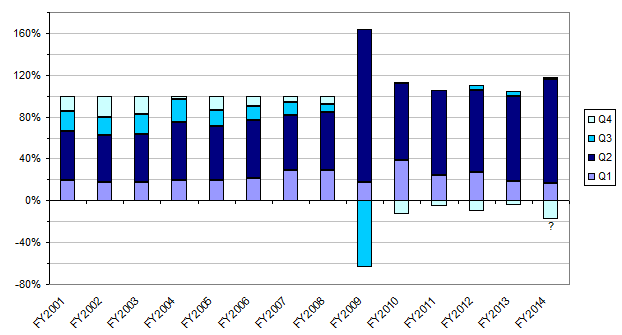 '…need to eliminate some of the negative chat'

As CAPA discussed in a report on 3-Oct-2013, Ryanair has embarked upon initiatives to develop its distribution policy, in particular with regard to its website and other digital channels, and to position itself as more customer friendly.

In FY2014, Ryanair’s 2% passenger growth rate will be its lowest since before it adopted the LCC model in the mid 1990s. Ryanair says that it will use this “brief pause” to improve its customer service, although it describes itself as “industry leading” in this regard already. Mr O’Leary believes that Ryanair has “a lot of happy customers”, but, he adds, “if we’re going to win the next 20 million customers, we need to eliminate some of the negative chat.”

Noticeable in Ryanair’s recent communications is the use of the word ‘customer’, where previously it referred to ‘passengers’, but there also appears to be some substance to back up the changed terminology.

Ryanair is also upgrading its website, which Mr O’Leary currently labels “crap at the front end”. The homepage will be simplified and the booking path shortened to five clicks from 17. ‘My Ryanair’, a registration service for customers to record their details as members, will avoid the need for personal details to be entered repeatedly. Mr O’Leary acknowledges that rival easyJet has a better website currently, but that Ryanair will “close the gap in three months and overtake them in six to 12 months”.

Early in 2014, Ryanair plans to introduce mobile boarding passes, a “Share the Fare” option, a “Fare Finder” feature allowing passengers to find dates and flights where the lowest fares are available, and a new mobile app for smartphones and tablets. In Jun-2014, new bespoke language websites in all Ryanair’s major EU markets will be introduced, starting with Spain and Italy.

Perhaps the most significant new announcement from Ryanair is the move to fully allocated seating on all its flights from Feb-2014, “making the boarding process smoother and enabling families or other groups to ensure that they sit together.” It will continue to offer reserved seating, for a EUR10 fee, in the first five rows, the back two rows, or the two over-wing rows.

What is new is that passengers will alternatively be able to select seats elsewhere on the aircraft if they check in more than 24 hours ahead of departure for a EUR5 fee. Seats will be allocated to those not choosing to pay the fee.

Ryanair says that the decision to return to allocated seating, which it abandoned when it adopted the LCC model in the 1990s, is a response to demand from customers using its new “Tell MOL” customer feedback service. In the past, Ryanair has always resisted allocated seating for fear that it would slow down boarding times and threaten its 25 minute turnaround times.

Is it a revenue-driven move?

In general, most of Ryanair’s new initiatives involving flight-related charges have been aimed at maintaining/improving turnaround times and/or lowering costs. For example, bag check fees and boarding card reissue fees were introduced to discourage check-in bags, to speed up the check in process and reduce airport and handling fees.

The relaxation of Ryanair’s strict policy on cabin bags to allow a second smaller item, where previously only one item was permitted, could now lead to more bags needing to be checked at the last minute if overhead bins fill up. This could then lead to a higher uptake of priority boarding, which Ryanair will continue to offer in spite of the introduction of allocated seating.

Interestingly, Ryanair’s 2Q results presentation refers to the “revenue potential” of allocated seating. If there really is strong demand for it, as suggested by customer feedback, this seems to be the main driver behind this initiative.

Mr O’Leary told analysts that Ryanair was planning for take-up to be as much as 50% on some routes. No doubt Mr O’Leary has also satisfied himself that it will neither compromise turnaround times nor add unnecessary cost.

Is this the end of the 'maniacal focus'?

There are some changes going on at Ryanair: a greater focus on customer service, willingness to introduce new product features based on demand. Is this the end of what we called a “maniacal focus on being the lowest cost producer”?

The answer to this question is no. Ryanair is still the lowest cost European airline and its sector length-adjusted costs per passenger are continuing to fall. In a time of soft yields, Ryanair’s sector-leading margins and EUR3.5 billion cash pile allow it to cut fares more aggressively than anyone else. This should accelerate competitor capacity cuts and consolidation within the European short-haul market.

By the time Ryanair starts to take delivery of its 175 new Boeings from next year, it is likely that this will help to bring about a firmer pricing environment. It makes sense to take the opportunity now to improve its product.